Most RPGs I’ve seen mention about navigation that when you’re following a road or river, you automatically get to your destination eventually, and you only need to make rolls for navigation if you’re going cross country or across the ocean.

Yeah. Kind of. But not really.

If you’re on a river and your destination is to just go downstream to the coast or a city you know to be further down the river, then there’s really no way you can get lost. But things look completely different when you’re trying to go up a river and you come across forks where you have to pick going left or right. 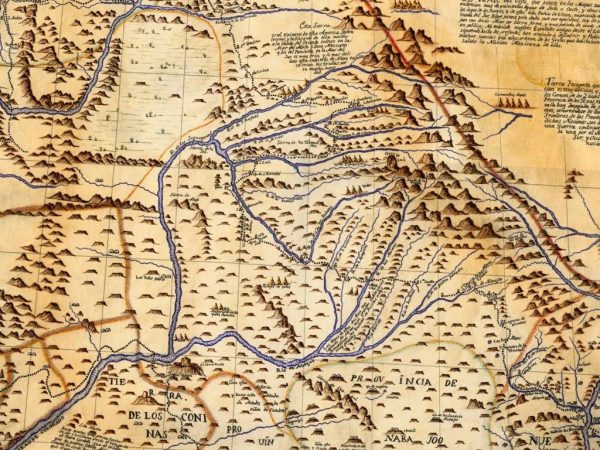 I’ve been on a couple of canoe tours throughout my life, and I’ve been doing the navigation on most of them. Though I have to say that was on very easy rivers in Germany, on waters that have regular traffic and existing infrastructure and very good maps. And we were going to destinations that had been selected by people who knew that those routes would be very easy to follow even to amateurs. And even then, I’ve had many cases where I really had no clue if that big branch to the right is the already the third big branch to the right we need to take, or if one of the branches we already passed looked much bigger in person than it does on the map. The map has an accurate scale on it, but with no means to monitor your exact speed, that’s still only of limited help. Now imagine that deep in the wilderness, following a map drawn by someone with no access to aerial photography or surveying tools.

In my rivercrawl campaign, going to a site will almost always consist of going upstream all the way to your destination. And since all wilderness travel will be along rivers, going with the “you can’t get lost when you follow a river” approach isn’t going to cut it. (Though conveniently, getting back to base at the end of an adventure will be very easy, and going with the current also a lot faster.) Something else is going to be needed.

Making a complete map of an entire river system spanning hundreds of miles with all its little side arms really isn’t practical. You could theoretically let players give it a shot on a blank hex map with very small hexes, but I think that would be very tedious and not feel like it reflects the kind of maps actual river explorers would be using for their notes.

Instead, I want to go with an entirely skill check based system to navigate through the networks of small side branches that fork of from the main waterways that are depicted on the main overview map. My own GM map only shows branches up to the third order, and I intend to let players find their ways on those without navigation checks. It’s only for the rivers even smaller than that that this system comes into play.

Maps are items that characters can find or sell that have instructions on how to reach certain hidden places from an easily recognizable and unmistakable landmark. Every map has a dificulty based on it’s quality. Using a very good map is an easy task, while using a poor quality is a very hard task. The difficulty is further modified by how far the destination is from the clearly identified reference point on the main rivers. Since I have all my travel times in increments of 10 miles, (1 mile per hour times 10 hours per day), I increase the difficulty of the navigation check by +1 for every 10 miles that you try to follow the map.

If the navigation check is a success, the party reaches the destination in the shortest time possible given the distance and their travel speed. If the check is a failure, they still get to their destination, but for each number that the check fell short of the difficulty, the travel duration is increased to require one additional random encounter check. I do three random encounter checks for each day of travel, plus one check per night. So missing the difficulty by three adds a whole day on the water searching and backpaddling, and you also get another night to rest and potentially have another encounter before you arrive at your destination. Since I usually have random encounters at a chance of 1 in 6 for every check, getting two or three checks added to the journey generally shouldn’t be much of a problem. But for journeys deeper into the smaller rivers, having someone with a good navigation skill and paying for high quality maps can become really appreciated.

The fun part comes with the additional use for navigation checks to make your own maps of the unknown rivers you explore. These maps can be very important if you want to find a place again after having left it, and can be sold to other characters. To make such a map, a character makes a navigation check. The quality of the map and the difficulty to use it depends on the result of the navigation checks. For Worlds Without Number, I’ve decided to make it 20 minus the navigation check result, with the minimum difficulty being 6.

WWN makes skill checks with 2d6, so I think it’s a great idea to let the player roll one of the d6 either open or in secret, and the other d6 gets rolled by the GM. That way the player has a clue for the final quality of the map, but can not be certain how accurate it really is. The ultimate difficulty for using the map remains secret for the GM, at least until the players trying to navigate with the map have reached the destination and will have found out for themselves.

For players going to discover unknown sites by going into these small rivers blindly, one simple approach would be to simply roll a d20, and the result is the number of random encounter checks until the party finds either a small randomly generated site or a larger site whose exact location on the river has remained undefined until a party randomly discovers it. Since you might always need a monster lair or pirate camp if players try to track randomly encountered enemies back to their hideouts, it’s a general good idea to have a couple of those ready at hand anyway. And players can be required to tell the GM that they plan to go on a random exploration a few days before the game.