What are they doing at night in the park?
Think of them waddling about in the dark.
Ducks! Ducks!

Nasty and small, undeserving of life,
They sneer at your hairstyle and sleep with your wife!
Ducks! Ducks!

Most people agree that geese are evil spawn of the devil, and for good reasons. But there are far more sinister feathered fiends lurking in the reeds flanking the Great River. The gavir looks like a black and white duck from a distance, but nothing could be further from the truth. Its strong beak ends in a sharp point like a woodpecker, which it uses to impale fish, salamanders, lizards, crabs, and even the occasional other water birds or really anything that gets too close. Usually it will swallow its prey whole, but can also seen pecking away at the carcasses of much larger creatures like vultures.

When seen close up, which generally should be avoided, a gavir has many resemblances with cranes, as well as snakes and otters. But most striking about it are its red eyes that are filled with malice and hatred for all other living things. While even its head looks similar to that of an ordinary duck, its eyes are in fact forward like the predator it is. Its duck-like body also conceals its true size, which is closer to that of a swan.

Unlike ducks, gavirs are fast and nimble fliers and much more silent when they attack their unsuspecting prey. The only upside of gavirs compared to other birds of prey is that their feet are lacking the sharp claws found on hawks and owls. However, their duck-like feet make them excelent swimmers and they sometimes ambush their targets by leaping out from under the water when they are not in the mood to attempt chasing intruders away. 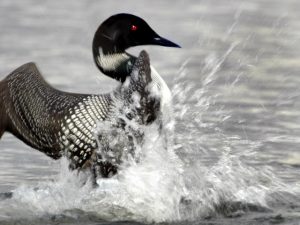 Gavirs are extremely agressive and territorial, attacking everything getting close to their nests. While their beaks can’t get through the hides of large ubas or crocodiles, gavirs will often resort to attacking their eyes to drive them off. The presence of large one-eyed predators is often an idication of gavirs in the area. As often as not, such confrontations end with the gavir getting eaten, but that doesn’t appear to deter these rampaging birds. The only other creatures they tollerate are other gavirs. Fortunately, gavirs are rare in the warmer waters of the Lower River, but they are a serious threat to travellers going up the Green River. 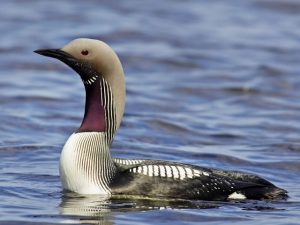 Their terrifying red eyes and raging demeanor has many people regard gavirs as demons, but their fury is obviously not fueled by the fires of the Underworld. Like all aquatic monsters, gavirs are spirits of the water, though such violent agression is rarely seen in any others of their kind.