There are a number of programms out there that allow you to make a hex map out of hex tiles. I used one of them to make this map of the Savage Frontier five years back. However, I am not a fan of these maps, at least not as something to put into the hands of the players. I feel it creates too much abstraction in the minds of players that works against them mentally visualizing the setting of the game as an actual world. As a setting creator, I see even myself getting affected by that and it significantly hampers my work on the world.

But hexes are very useful as tools to keep track of the party’s position as it is moving through the wilderness. In most situations you want to have separate maps for the players and the GM anyway, so you can keep track of where hidden and unknown sites are located without giving it away to the players. You can also overlay a hex grid on top of the GM version of the map along with the hidden sites and other notes. The terrain type of each hex won’t always be completely clear, but that’s not really an actual issue. Make a best guess which terrain on the background image dominates, and when you don’t stay consistent between different occasions the players are passing through it nobody will notice.

Finding an image of a hex grid on a transparent background to simply slap on top of a map you have in Photoshop or GIMP has been a huge pain in the butt for most of this afternoon. But at least for GIMP I found a great solution to add a grid on top of any image.

And that is the entire process. The tricky part is to find the right value for “Tile Height” to get the tile size that matches the scale of your map. But if the map has scale markings on it, move the view of the image to that corner of the map and try out different sizes in the Mosaic dialog until the hexes line up with it. (The “Preview” box has to be checked to see how the grid would look like with the current settings.)

The only issue I noticed is that with hexes of sizes below 20-30, the hexes tend to get a bit squashed as a result of the image consisting of pixels, but I think you’d get this with any other method to get a hex map as well, unless it uses vector images (which I doubt any map software does). I love working with Krita. It’s so much fun. I think it looks amazing.

I’m not happy with the labels on the map because the only fancy way of writing I ever learned was back in primary school and this still looks like written by a 10 year old. But they are all on a separate layer so I can easily switch them out for something nicer later.

One issue I already discovered with the previous map is that at this scale it becomes quite difficult to make city names at a readable size. There just doesn’t seem to be enough space for it. But then, when you look at actual medieval maps, they seem to have had the same issue as well, and they often look incredibly messy and crammed. Maybe I’ll give that a try later, but for now I think this looks really good. Now admittedly a very crude map. I’ve not been using a tablet for drawing much yet. And I realized that a size that might work for a poster map might not quite do the job on a screen. But overall I really like how Krita simulates brush strokes. With some more practice, this could look really good.

This map shows the current state of the setting and I haven’t really been doing any meaningful changes in the last couple of weeks, so I think this is actually pretty close to final. Just let me tell you that trying to draw a setting that is almost entirely just coast is a bit weird.

When creating a “world map” for a fantasy setting, I generally find it rather pointless to actually make a map that shows the entire world. Most fantasy worlds aim to be late medieval to early modern in the kind of world they describe and in these time periods much of the Earth was yet unknown even to the people with the most complete maps that existed. Also, an Earth-sized planet is massive and there is no way you could ever actually visit all those places, no matter how many books you write or games you play. At the very most, what a setting can practically make use of, is a region that covers all the major climate zones and ecological environments. 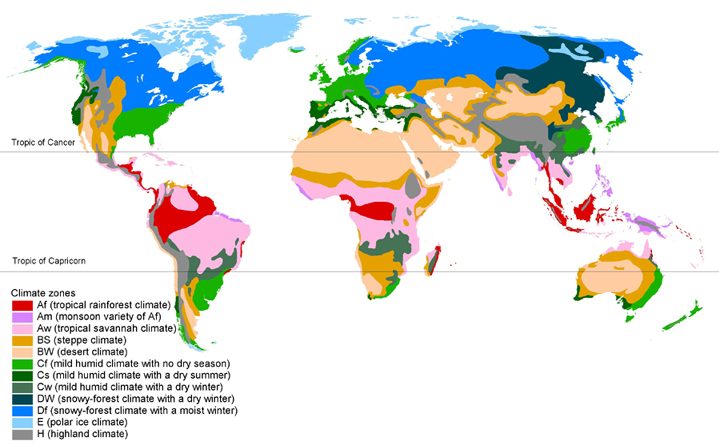 While the distance from pole to pole is a bit over 20,000 km, the north to south length you need for a map that provides all the environments you could ever wish for is much shorter than that. I took some measurements on world maps and the numbers that showed up again and again were all in the range of 3,000 to 3,500 km. Or in fantasy units, 2,000 miles.

If you really want the full range of possible climates from the thickest tropical jungles to the permanently frozen artic tundra it’s more like 3,000 miles, but with 2,000 you are already on the pretty safe side in your ability to cover any landscapes you might want to put into your world.

There’s been some maps of the Ancient Lands before in the past, so if you’ve seen any and remember them, the new map doesn’t really look much different than the old ones.

The lables seem to be pretty much unreadable, but I think the coasts and terrain are hopefully still fully visible. The main change I made was to remove the open plains of Sanved on the western shore of the Inner Sea and cover it all with forest again, which is actually what you would get on the eastern coast of a continent. (Deserts are always on the western coast because of wind patterns. Except Arabia.) I also beefed the Vestanen mountains up in size and moved them a bit more south, as they will now be the new homeland of the Vandren.

The Border Hills in the west and the Great Plains beyond them are now completely gone. Nobody knows what lies in that direction and when the forests might ever end. In the north I reshaped the Rayalka mountains a bit, but you might be able to make out that there is still a big question mark in the kaas homeland of Yakun. Got to do something with it, as I love the kaas, but that will have to wait for later.

One thing my maps never show satisfactorary is the scale. This area is pretty huge. (Not when compared to those map nuts who do whole globes, but still distances that would take weeks to cover by ship and months on foot.) That bulge in the north is about as big as China and the whole map covers an area that ranges from the Subarctics in the north to the tropics in the South. Imagine you had the Russian pacific coast on the north edge of the map and Vietnam on the south edge. You probably could get all of Europe on this map (though perhaps without the northern parts of Norway, Sweden, and Finland).

You might think that the sea coasts are boringly straight and there is going to be more detail in more refined maps, but mostly this is how real coastlines look like. Europe and Indonesia are the exception. Look at Africa, South America, and most of North America and you’ll see that there are very few bays or major islands except for the arctic regions.

Something I’ve seen when searching for other fantasy maps as inspirations and which I still want to add are some major inland lakes. On Earth these are very rare and most fantasy maps do them pretty unrealistically, but they still look interesting and add some variety to the endless sea of trees. Also allows me to do more boat stuff even far away from the coasts. :p

To get a familiar reference of scale for my own maps, I created this Hex map of the Savage Frontier region of the Forgotten Realms. 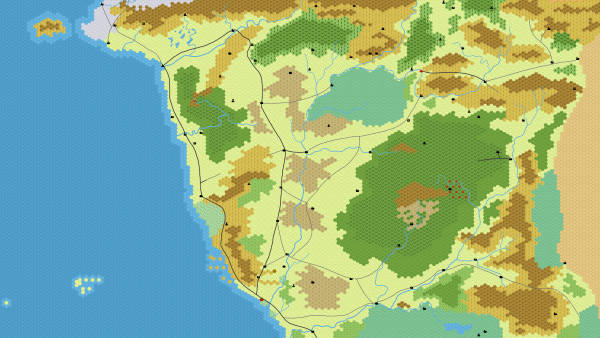 If you’re interested in it, you can get it at full size here.

A version without any map icons can be found here.