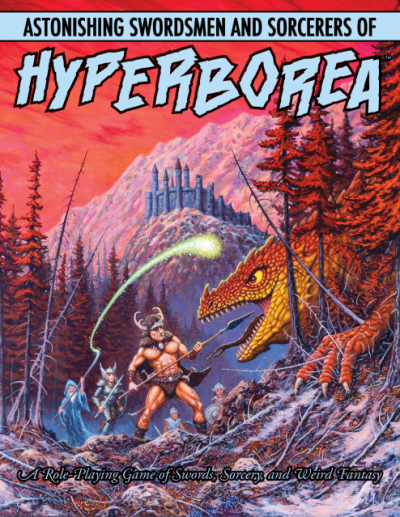 Coins in RPGs have always been something that seemed more like an annoyance to me than something that makes playing the game more fun. Sure, finding treasure and buying better equipment is often one of the most enjoyable parts of an adventure, but all the accounting that goes into keeping track of all your coins is right at the opposite end of the entertainment-scale. In many games, most mundane pieces of equipment have prieces that are completely negible, being counted in silver or even copper coins. When you’re carrying around thousands of gold coins, buying such objects isn’t even felt in your purse. And if you’re playing in a fantasy campaign in which there are no magic items for sale in stores, you can easily have the best weapons and armor that money can buy by third level. You have more money than you could ever spend on most mundane expenses like food, lodgings, and clothing. It is very tempting to simply tell the player not to bother with substracting the 2 silver pieces and 7 copper pieces they just spend. I’m also no fan of pure dungeon crawling, and the hunting for treasure isn’t a priority in my games. It’s something that happens more by accident at the side while the PCs are fighting their way through a place to find a person of item of special significance.

However, I am also a fan of the Sword & Sorcery genre and a big part of it is heroes being completely broke at regular intervals, being forced to get by with barely anything more but the shirts on their backs and having to climb back up towards fame and especially fortune. Especially in some OSR games, you also have some focus on hiring mercenaries and raising small armies of followers, who all need to be equiped, fed, and paid. And I don’t like to just handwave such things and let the players have whatever they want.

Encumbrance is a similar annoyance with all the fiddly accounting involved, and I’ve adopted the simplified Encumbrance system from Pencils and Papers, which has been working out really well for us so far. So I’ve come up with a similiar idea to simplify the tracking of character wealth:

It’s up to the GM to judge when a purchase is considered to be a single item or the character bought something in bulk. While a character in the platinum class might buy a shield worth 5 gp and not substract the amount from his wealth, buying 100 such shields (500 gp/50 pp) to equip his guards would be a single purchase that does get substracted. Similarly, a single roll of linen cloth wouldn’t count as treasure for the same character, but a whole wagon load of linen could still be sold and add to his wealth. If something is bought or paid for on a regular basis, I think a smart way to handle it would be to check how much it costs the character per month. In Pathfinder, the daily wage for an untrained hireling is 1 sp. So a character of the platinum class could have three such servants in his home, and since their wages total up to only 90 sp (9 gp), it would still be negible and not be included in his expenses. Another important thing to note is, that there can be a difference between the wealth a character has stashed in a vault at his home or is carrying in a coinpurse while on adventure. A character could easily have piles of gold stored in his home, but when his coinpurse gets stolen, he may have to pawn some trinkets just to get back to silver class until he returns home. And when you’re really low on money, finding cheap ways to get a place for the night is getting interesting again. Being a high ranking officer and having to sleep in a barn would be an indignity that greatly enhances the game. (Really, indignities are the best driving force behind great roleplaying. There’s only two ways to hurt a player: Stealing their money and hurting their pride.)

I was playing God of War again, which has lots of great bosses and ridiculous amounts of violence. And it got me an idea:

In many RPGs, player characters go unconscious when they lose their last hit point, but are actually dead only once they reach -10 hp. For the sake of simplicity, this is often ignored for enemies, and once they are out of hit points, they are simply dead for all intents and purposes. However, to add a little more gritt to my campaign, I plan to adopt a rule that any enemy brought to exactly 0 hp is not outright dead, but severely enough wounded to go down and lose the ability to fight, move, or even make any loud shouts. So at the end of a fight, there’s a certain chance that two or three of the defeated enemies are still not quite dead and semi-conscious. It’s then up to the players to finish off the dying, ask them a few last questions, use magic healing or treat their wounds so they will survive, or just leave them behind to die.

In Astonishing Swordsmen & Sorcerers of Hyperborea and probably most OSR games, a Trauma Survival check might be appropriate for enemies who are left to die, but the chace for that (default 75%) seems much too high. I probably go with an Extraordinary Feat of Constitution in AS&SH, which would only be 4% for most enemies, and maybe 8 or 16% for the tougher ones. Of course, if an enemy should survive, the GM would be pretty much obliged to have that NPC appear again later on in the campaign.

I can very much see why such a rule doesn’t appear in most RPGs, though I would kind of expect to see it in Lamentations of the Flame Princess. I’m usually not a fan of gore, but I think in this case some additional appaling consequences of violence can go quite a long way to reinforce the feeling of Sword & Sorcery, and also is a great opportunity for players to flesh out the peculiar personalties of their characters.

Shaman’s Masks
These masks are made from wood or bone, but sometimes more exotic materials as well. Most cover only the upper half of the wearers face or leave an open space for the mouth. They are usually painted in stark colors or decrated with feathers or leaves. These masks are used by shamans to help them communicate with spirits, as it makes them appear not quite human and separates them from the mortal world, and allows them to peer into the spiritworld and see things normally hidden from human eyes. Each mask is different in both appearance and specific abilities and the more powerful ones have often been handed down from masters to apprentices for many generations. Common abilities are: