A discussion came up about how much the map of the Forgotten Realms was changed in size over the various editions, and I sat down to finally get a definitive answer to that.

As far as I can tell, the maps for 1st and 2nd edition are identical. The 2nd edition map perfectly overlaps all the outlines of the original, just prettied up to make it look more appealing. (An attempt was made.)

Working only with image files, getting the scale for the 1st edition map right took a bit of work. The Campaign Set and The Savage Frontier mention in the text the distances between various locations. Of these 11 given distances, two are completely off from all the others and as such I discarded them. The remaining nine were all in pretty close agreement and I went with the average of those to scale the image to the same scale as the other three.

Making four overlayed layers into a comprehensible image would be an insane amount of work, so I have limited myself to a number of reference points and connected them with lines, which gives us this illustration. 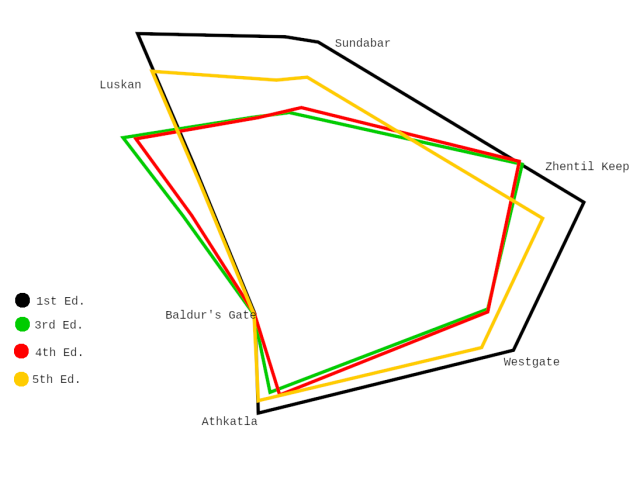 As can be seen here, 3rd edition both scaled down and squished the map significantly. Even with all the major overhauls of the setting in 4th edition, the overall geography remained effectively untouched. In 5th edition, it appears they returned the overall shape of the landscape to its original form, but not its original size. Luskan and Sundabar have moved further North, but if you tilt it a bit, the distances between Baldur’s Gate, Atkatla, Westgate, and Zhentil Keep have not really changed at all. 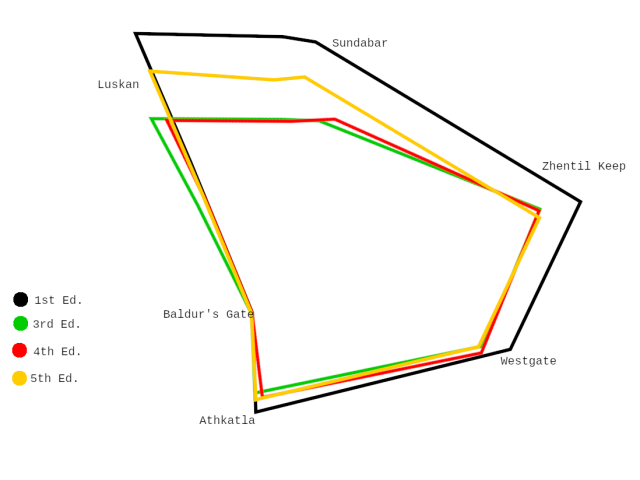 Unfortunately, 5th edition only has a map for the Northwest quarter of Faerûn, but the changes that 3rd edition made to the rest of the map are also pretty  wild.