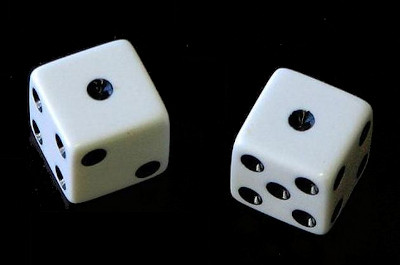 While I was checking the odds on an old system for rolling for random encounters in the wilderness, that I’ve come up with some years back, I discovered an amazingly simple equation (with help from gunnervi and A1vin) to calculate the expected amounts of 1s that come up in a roll of multiple dice of the same type.

If you roll N number of P-sided dice (NdP), then the expected amounts of 1s to be rolled is N/P.

My random encounter system rolls a single die four times per day, with a result of 1 indicating an encounter. To get different odds for areas with high or low population densities, you switch to different types of dice, with d4s being used for very busy areas and d10s for very desolate wastelands. I wanted to know how many encounters you would get per day on average, and the numbers I got for the four dice types are 0.4, 0.4998, 0.666, and 1. With the d8 looking like a rounding error of 0.5, I realized that these are all fractions. Specifically 2/5, 1/2, 2/3, and 1/1. That doesn’t look much like a pattern, but I felt like poking at it just a bit more, and you can write the same numbers of 4/10, 4/8, 4/6, and 4/4. Which matches the sizes of the dice, and as I figured out a bit later, the number of rolls!

I only checked this for rolls of one to four dice and only for the d4, d6, d8, and d10, but the results are so exact that I am very confident that it works for any number of dice of any type.

I had decided to go with random encounters happening on a 1 instead of the max number of each type of dice because it just seemed neater to say “encounter always on a 1!” But the math works out the same either way. If you have a player roll Xd6 and want to know how many 6s you can expect to come up on average, it’s the same as counting the average amounts of 1s. Or any number actually. As long as it’s just a single number you are looking for, and not a range of numbers (like “3 or higher”), this equation works.

This might be of some use for people tinkering around with dice pool mechanics.