While working on my wilderness setting it became obvious that running it would require a solid and easy to use system for overland travel. There are tables for Travel Pace in the Player’s Handbook and additional rules in the Dungeon Master’s Guide to deal with overland travel in 5th Ed., but just like the tables and mechanics in 3rd Ed., I find them very impractical to use in actual play. If you use them rarely, it’s difficult to remember how it all works, and if you use them frequently it’s way too much calculating and eating up too much time. I plan this to be a series that will put together a complete system that is easy and fun to use and covers all the relevant aspects that are part of wilderness travel. Which is movement speeds, resoure management, encumbrance, random encounters, and weather. All of this will be based heavily on the 1981 Expert Rules by David Cook. Those are a really good start and reference point, but they can be improved and require some tweaking to work with 5th Ed. 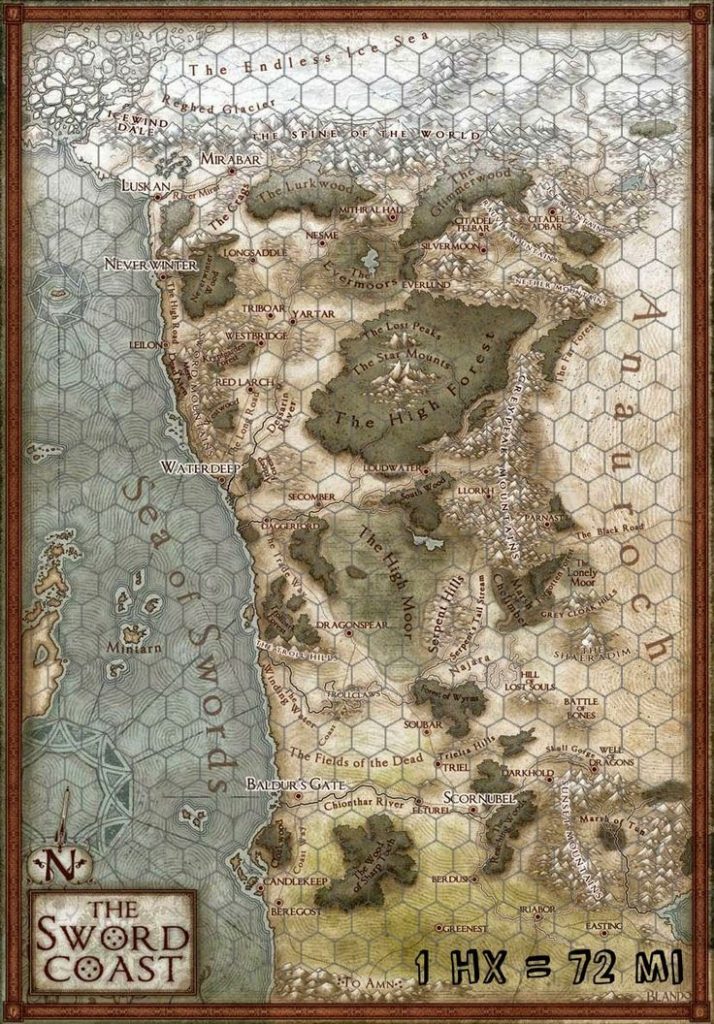 I have a long and very conflicted relationship with hex maps, which I attribute primarily for my distaste of hexcrawl campaigns and my appreciation of pointcrawls. But using hexes to measure distances and treating hexes as discrete areas are completely different things, and my dislike of the later is no reason to completely discard the former. One reason I don’t like hexmaps is the amount of time it takes me to make anything good looking. Another is the way in which it makes the players interact with the fantastic imagined world. Filling in little white hexes with as you move along really feels just plain wrong to me. But when you just want to measure distances and see whether the movement is along roads or through plains or not, then you can simply add a hex grid overlay to any existing map. In most situations, you are going to need separate maps for the players and the GM anyway. I recommend the GM-map with all the secret locations marked on it getting a hex grid overlay, while the player map does not. But ultimately, what made me decide to use hex grids for this system, was the issue of parties getting lost. This seems quite important for a system intended to be used in a giant forest without roads, and I just can’t think of any way in which this could be handled on a point map.

Using a hex grid to measure distances for a journey has been a long established tool, but neither 3rd nor 5th Ed. are designed for it. When you try to convert movement rates to hexes, you always keep ending up  with the party traveling 1/2 hexes over a full day, or 3/4 hexes. Which I think defeats the entire purpose of measuring distances in hexes in the first place. So I made the decision to not attempt doing that and instead begin the entire design process by creating a system in which movement can only ever happen in full hexes and everything else will be tailored to fit on top of that.

I decided to use the Travel Pace table from the PHB as reference, which has speed always being either fast, normal, or slow, and the terrain either being regular (easy) or difficult, with difficult terrain taking double the time to cross than easy terrain. 3rd Ed. also had terrains that would take 1/4 or 3/4 normal time to cross and while that may seem more “realistic” it really makes things needlessly complicated. All of this is pure make believe anyway, somewhat inspired by reality, but completely disconnected from it. Two types of terrain is enough, and I also don’t consider it to be useful to account for the different walking speeds of smaller and larger creatures. While there are significant differences in running speed that matter in tactical combat, when travelling an entire day we can simply assume that smaller characters have the natural stamina to walk at a faster pace to keep up with the walking speed of larger characters. Stamina is also the reason why horses generally don’t travel further in a day than humans. The important difference is that a horse can carry all your heavy supplies with ease without being slowed down by them as you would. So three movement speeds and two types of terrain it is. And I think there are really just two practical ways this resulting table could look like.

In the Simple System, we have movement speeds in the ratios 3:2:1. The Travel Pace table gives movement in miles per day, but these are in the ratios 4:3:2, which I replicated in the PHB System table.

The next question is now “how big is a hex?” I tried out different hex sizes, and again there are only two solutions that really make sense and get close to the distances in the Travel Pace table in the PHB. The following tables show how much distance would be covered when traveling the number of hexes given in the previous tables.

In contrast, when using the PHB System with speed ratios of 4:3:2 and 4-mile hexes, these differences are much smaller. Exactly one third the difference we get in the Simple System. So when it comes to replicating the Travel Pace table from the PHB as closely as possible in full hexes without fractions, this one is the clear winner.

But in the end, I am still going to go forward into creating my additional travel mechanics using the Simple System with its speed ratios of 3:2:1 and 6-mile hexes. As a simple matter of practicality. 6-mile hexes are quite probably the most commonly used size for hexes by far. There are a huge amount of existing resources out there that have hex maps at the 6-mile scale. And there are other reasons why 6-mile hexes are really good. In contrast, I don’t think I’ve ever come across any map that uses 4-mile hexes.

Yes, if you would start from scratch in a vacuum, 4-mile hexes are clearly the better choice. But when dealing with hex maps in D&D, we are looking back at four decades of established customs and existing resources. And I really don’t want to muddle with that.

My ideas for sea travel hexes aren’t worth a separate post, so I am adding them here:

While movement speed on land appear to be somewhat plausible when compared to reality, speeds for water travel are completely fictional. The numbers in the PHB seem considerably too low, but then you also get the complication that ships being propelled by wind depend on the wind conditions to move and because of the way sails work, going in a straight line is generally not the quickest path to get where you want to. Creating an even halfway decent approximation of ship speeds is way more complex than it would ever be worth it in a game like this, and so whatever system you are using will be a very basic abstraction.

For the same reasons that I prefer the 6-mile hex for land travel, I also like to go with the 30-mile hex for sea travel. 24-mile hexes would have more flexibility if you would want to have ships with many different speeds, but I am satisfied with ships being either “fast” or “slow”, with no further differentiation.

Ships out at sea can travel for 24 hours per day. By the PHB, rowboats are 50% faster than river boats. But a sailed river boat requires less work to move, so you can travel for more hours until it gets too dark. I say the two cancel each other out and the total distance per day comes out the same.

From what I was able to find out, doing 36 miles rowing downriver is quite realistic, and for the sake of abstraction we’re ignoring that actual rivers aren’t straight. And again, the reality of travel speeds are much more complicated than this. This is the speed characters with light encumbrance would do in easy terrain. Since most wilderness in my campaigns isn’t easy and supplies for a long trip can easyily mean having heavy encumbrance, this is very good.

Going upriver would only be 2 hexes per day. Which is also what you get when travelling on foot through difficult terrain with heavy encumbrance. Since a long expedition is probably going to haul a lot of stuff with them and most wilderness will be difficult terrain, doing such a trip by boat isn’t going to be any faster or slower than doing it on foot. No change when going up the river, but huge advantage when going back down totally justifies the use of boats to travel deep into the wilderness for me.

One thought on “Exploration System, Part 1: Setting the hex-scale”