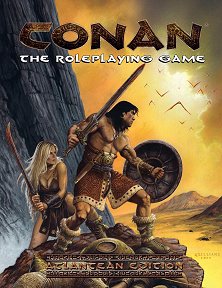 While it’s really well made, I’ve always been thinking that making a Conan RPG based on the d20 system was a really odd and unfitting choice. The extremely steep power gradient between 1st and 20th level just doesn’t seem right. But running the Conan game in an E6 variant? Now that seems like a really interesting thought.