The Old World is a setting in which money and treasure plays only a minor role as there just isn’t a lot you could buy with it. In a campaign, even the best types of armor are trivially cheap while magical objects are valuable beyond measure and not something that can be bought or sold. And since most trade takes the form of barter, there aren’t really many coins around to begin with. It’s a world that runs on obligations, favors, and debts. It makes little sense to track the contents of the PC’s purses in such a campaign.

However, there is one aspect of playing a B/X style campaign that I very much like, but which falls through the gaps when you have no money, and this is the hiring of mercenaries. When numbers and tactics matter much more than individual armor class, hit points, and attack bonus, being able to bring a bunch of archers and spearmen to a fight makes a huge difference. And I am a big fan of the Combat is War approach to battles in RPGs. It’s not about showing your personal abilities, but about making the fight as unfairly tipped in your favor as possible. Any good battle is won before the fighting even starts. (Of course this would be boring, but players always have limitless potential to plan really badly, which then makes it all the more exciting when they suddenly have to improvise.)

Hiring such reinforcements doesn’t really work in a game where there is no money. But you can still always assemble a posse. 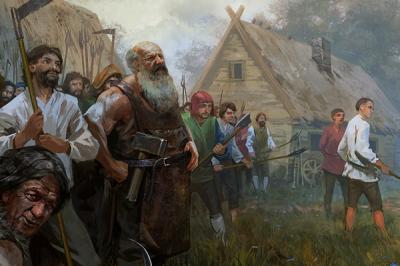 In an Old World campaign, most adventures take place in villages or small towns where the PCs are staying in the home of the local chief to help reinforce his warriors for the protection of the community. These settlements are always very Wild West in character and all of them have numerous people who have weapons and know how to fight. If the players need additional manpower to drive bandits from the area or bring down a dangerous beast that has been seen nearby, there’s always a pool of potential helpers. The players might either ask the chief to give them some of his men as backup to protect the village, or they can make a call for volunteers in the great hall or the main square. Either way, the outcome is the same.

I am always a fan of making sub-systems as simple and easy to remember as possible and making them well integrated with the already existing rules. So this really isn’t anything particularly fancy or special beyond the initial idea.

The result of the roll is the number of level 0 NPCs who come forward as volunteers, or are ordered by their chief. If the posse is gathered to defend the community from an immenent attack, or to hunt down a particularly vicious criminal, the number might be doubled. However, the number should usually not exceed 10% of the total population of the community. (Any major NPC who has a personal interest in the PCs plan might also come along.)

The base Morale score for the posse is 7, modified by the Charisma modifier of the leading PC. If the warriors are fighting for the safety of their homes, Morale can be increased by +1 or +2. If the party leads the posse into seemingly suicidal situations or attempts a needlessly reckless plan, an apropriate penalty to Morale should apply.

The posse is gathered only for one specific task. Once the task has been acomplished or resulted in a failure, it will disband and the warriors return home. If at the end of the task the players want to continue to a new task, a new recruitment roll has to be made. (Obviously a higher result than the current number of warriors will not make the posse increase beyond its current size.)