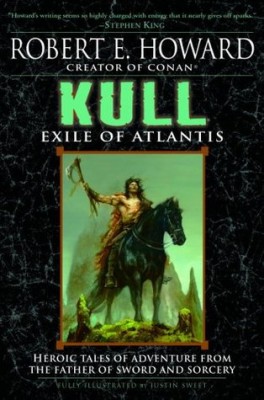 While most people know of Conan, only few have ever heard of Kull. Kull was, to my knowledge, the first serious attempt of Robert Howard to write heroic fantasy, but he had only very little commercial success with the series and I believe only managed to sell a single story to a magazine. It was only much later when he had already become famous with Conan that people really took interest in his earlier stories about Kull. This collection appears to include everything Howard ever wrote about Kull and I think even goes a bit overboard with it. Not only does it included several full stories (which admitedly would have made for a pretty thin book), but also earlier drafts for some of them and a number of fragments that were never completed and sometimes only conist of a few pages. If you only look at the actual full stories, this book is a lot shorter than it looks.

Kull does have his fans and many of them are sometimes quite vocal in asserting that Kull is not simply a proto-Conan. And while it’s true that Kull is not just that, he still is very clearly a proto-Conan. Kull is a barbarian from Atlantis who had a turbulent career as a slave, gladiator, and soldier, until he led a rebellion against the king of Valusia and strangled him with his bare hands, taking the throne for himself. Not only is that pretty much exactly what we’re told about Conan in The Phoenix on the Sword and The Scarlet Citadel, but The Phoenix on the Sword is 80% identical to the Kull story By This Axe I Rule. Conan did not come from nowhere or out of nothing. Conan was Robert Howard’s attempt to take Kull and make the stories more action-packed with more monsters and grander villains. And as we now know, it worked.

While I’ve heard some people say that they actually like Kull more than Conan, I’m really not feeling that way. As a character, yes, perhaps Kull might be a bit more interesting. But when it comes to the actual stories and what is on the page, Conan is playing in a completely different league. The stories of Kull are not bad and clearly the work of a writer with a fascinating imagination. But as the craftsmanship goes I do find them rather lacking. There are good ideas, but as pacing and tension goes they are mostly pretty weak. And I don’t really feel surprised that Howard was not able to sell them to a magazine for publication. Even the completed stories still feel like drafts, and often like first drafts at that. As completed stories they aren’t just that good and I think reading Kull at his best is comparable to seeing Conan at his weakest.

When it comes to rating this book, it really is much easier than I’d like to: Nay! I do not think this is a good book. I can not recommend it to people looking for something fun to read. It’s still worth reading if your interest in Kull is an academic one. This is where Sword & Sorcery really started and where it took the shape we now know. And this is Robert Howard when he was starting out writing fantasy, which is also really fascinating to examine for a fan. But I don’t think it is offering much when you’re looking for entertainment.