George Martin described his Song of Ice and Fire series as being basically the War of the Roses with dragons. So when I was checking some facts on the 14th century German pirate Klaus Störtebeker, I very soon realized that someone should write a fantasy series inspired by the whole regional situation in which he lived and was active. I always considered the Baltic Sea a region where nothing really ever happened after the times of the Vikings was gone. A rather boring and insignificant part of the world. There was the time when Sweden send troops into Germany during the 30 Years War and that time when the Fins repelled two huge Soviet Invasion during World War 2, but that appeared to have been pretty much it.

But, oh boy… At least for the last decades of the 14th century, shit was getting seriously real around here. The king of Sweden and Norway had split his kingdom between his two sons and the new king of Norway married the daughter of the king of Denmark. After the deaths of the kings of Denmark and Norway, the Danish princess manages to get the nobles to elect her son as successor of both her father and her husband. This angered her sister, whose own son had been meant to become king of Denmark, but that had been overruled by the Hanseatic League. If you’re not familiar with them, think East India Trading Company. But probably even more powerful by quite a bit. These super wealthy merchants ruled over several of their own independent city states. The prince who had been denied the throne of Denmark was also the Duke of Mecklenburg in Germany and now understandibly upset with the League. 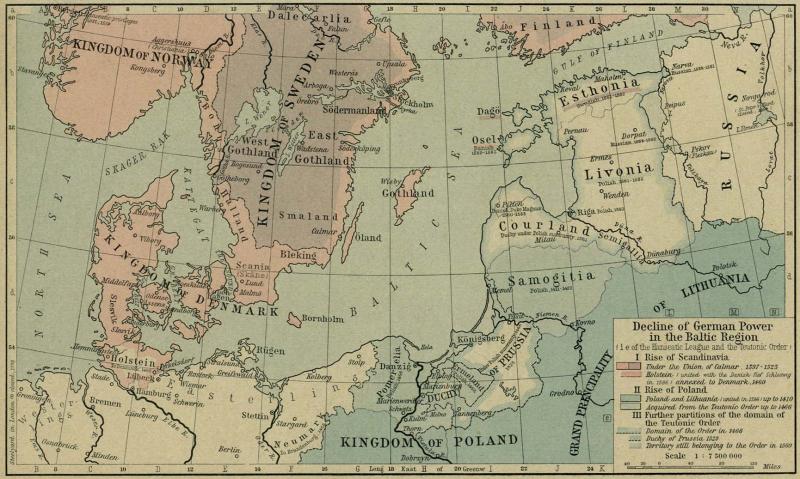 The Swedish nobles saw an opportunity to get rid of their king by making an alliance with Denmark-Norway and start a kind of civil war. Since Denmark had the Support of the Hanseatic League, the Duke of Mecklenburg joined in on the side of the Swedish king. This lead to the creation of a serious force of mercenaries/privateers/pirates who are lead by impoverished nobles from Mecklenburg and came to aid the besieged Swedish capital Stockholm. These pirates quickly became a serious disruption of sea trade and so the Hanseatic League send its own troops to fight them and eventually occupied Stockholm. The pirate army gained control of the island Gotland, which is the largest island in the entire region after Great Britain and Ireland and sits right in the center of all the Baltic Sea trade routes. This annoyed the knights of the Teutonic Order, who originally were crusaders in Palestine but then went on another crusade against pagan Slavs on the Baltic coast and established their own independent country in Lithuania a hundred years earlier and was regularly at war with Poland. So the Teutonic Knights invaded Gotland, which forced the remaining pirate leaders to flee the Baltic Sea entirely. And they ended up in East Frisia, a region that previously had been an egalitarian anarchy but after several desasters fell under the control of several warlords. From there the situation gradually calms down as Sweden gets integrated with Denmark and Norway into the Kalmar Union and the remaining pirates are eventually hunted down and executed. There’s no big finale or ultimate showdown to the real story.

But, damn! This is wonderful stuff for a big fantasy novel! It got everything. Various kingdoms, succession conflicts, dynastic struggles, merchant lords, exiled nobles, pirates, warrior monks, island fortresses, barbarian chiefs, sea battles, sieges, public mass beheadings of known outlaws. Instand awesome, just add magic. And probably the best part: You got two sisters who both fight over whose infant son will become the ruler of the whole region.

The one thing with my Sword & Sorcery setting that I was always a bit unhappy about is that it developed into something that really wasn’t suited to have a lot of Baltic Sea culture integraded into it. But this would be a perfect opportunity. And many of the key locations are right where I grew up. Lübeck, Hamburg, Mecklenburg, Denmark. That’s right outside our front door. (And I am currently planning to return back North later this year after several years in Southern Germany.) 14th century is a bit late when it comes to my personal taste to fantasy aesthetics, but transfered into a fantasy world the basic political situation should also work quite well in something that looks a bit older. Can’t really have a super powerful alliance of merchant lords in a true dark ages setting, but there’s plenty of room to wriggle. But then, I think the world as shown in the Witcher games seems very much inspired by pretty much the same peroid and region and I enjoy that quite a lot.

Though I really have no idea yet how to turn that into a story. Because I am actually not a fan of these huge epic series with millions of words. But it feels to me like an idea that I should seriously keep in mind if I one day feel the need to take a break from my Ancient Lands stuff.

One thought on “Awesome future novel idea #3: Pirates of the Baltic and Kraken!”