One of the things I noticed about the Dungeons & Dragons Basic rules is that the game uses the same modifiers to rolls for all six abilities just like 3rd edition does and which is quite different from the chaos that is ability modifiers in AD&D. However, the modifiers are smaller and more spread out than in 3rd edition, giving only a +3 for a score of 18 instead of a +4.

The actual ability scores in Basic are almost meaningless. As far as I am able to tell, everything really comes down to the modifiers. The reason that you have ability scores at all is that you can easily generate them with 3d6, but they are really just the first of two steps to get your ability modifiers. In theory, once you have the modifiers written down, you could erase the ability scores from the character sheet. They are no longer being needed for anything.

The super oldschool way to generate ability scores is rolling 3d6 six times and applying them to the six abilities in the order you roll, with no moving around to suit your taste. In 3rd edition, but also AD&D, that was pretty brutal and you could very easily end up with crap. When I generated 16 sets of ability scores, all but the first one looked pretty bad. (It was 13, 16, 10, 14, 16, 16! I wish that one was for an actual game.) But when I wrote down the actual modifiers you get from these scores and added them up, it almost always came down to a total between +1 and -1, which really is very average.

So I went ahead and made this graph to show the chances not to get the ability scores but only the ability modifiers: 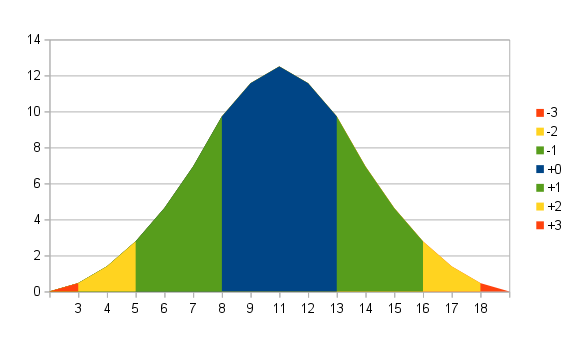 (It’s not entirely accurate because I took a shortcut and did not convert the 17 data points into 16 ranges, but it should be pretty close, with only the blue area being a slightly bit wider in reality.)

As you can see, the chance to get a modifier of +/-2 or 3 are actually pretty small. The chance to get a modifier of 0 or +/-1 is 86%. The chance to roll a 3 or 18 is under 0,5% each. That is not too bad and even if you do end up with a -2 or -3 in a stat, it often doesn’t hurt a lot. Only the Wisdom modifier is added tone one of the five saving throw types and there are no skills to which modifiers would be added. Even thieves don’t get any bonuses or penalties to their thieving skills. Also no skill points, so low Intelligence doesn’t hurt much. Strength is only added to the chance to hit but not the damage you do (and no +50% bonus when using both hands and any Power Attack shenanigans). Minimum ability scores to play a class exist, but only to play a dwarf, elf, or halfling, and then that minimum score is just 9 (everything starting from the line at “8” on the graph). Even a low Intelligence wizard or low Dexterity thief still works just fine, they just would level up somewhat slower than usual.

So I think in Basic, 3d6 in order really isn’t any bad. The odds to get truly terribly stats that make your character really suck or make you unable to play your prefered class are pretty low and when it really doesn’t work I probably would let a player roll again. (Better then to wait until the character charges heroically to his suicidal death in the very first encounter.) But a character with lots of 9s and 10s and another 6 really are no reason to complain in this game. May not be great, but still would be perfectly playable.

Now AD&D on the other hand is completely different story. Even the Player’s Handbook says that it is essential that any character has at least two 15s. Except for the one set I generated with the three 16s, I don’t think I had any 15s in the other fifteen.