The Enveloper is some kind of gooey creature that has the ability to absorb people it killed and gain its abilities and knowledge. Which each new victim it simply adds its abilities to those it already has and gets tougher and stronger. It may look like the Michelin Man, but otherwise has more similarities with The Thing. It doesn’t seem to be able to change its appearance to that of a person it absorbed, though.

Ettercaps are primitive humanoids with a poisonous bite and the ability to create webs like spiders. They use the substance as building material for all kinds of traps. Their nature also makes them go along well with spiders. Ettercaps did show up in all following editions of D&D, as far as I am aware, later on becoming quite spider-like themselves, but there isn’t anything of that in this original version. The bug eyes started in AD&D 2nd edition and this aspect was build up increasingly ever since.

The Eye of Fear and Flame is another skeleton wrapped in a robe and stalks the underworld to do evil deeds to lawful characters. No real reason why, but it just does. In it’s natural state, the face is hidden inside the hood by supernatural darkness, but if anyone tries to resist its commands, it will remove its hood, revealing its bare skull with two gems as eyes. One red and one black. The red eye can cast a fireball spell every three rounds. And the black eye, you guessed it, casts a fear spell. Trying to cast spells to blind it at the creature will simply reflect them at the person who cast them. It can’t really fight in other ways and when it’s starting to lose it will try to escape to the ethereal plane, though that takes it two rounds to do so, which can be quite plenty of time to destroy it. At 12 hit dice and armor class 2, it’s pretty tough, though. This is another creature that sounds like it was really cool when it was originally used by the person who created it, but without knowing that story, it seems a bit random. And I guess the name is pretty cool, too. END_OF_DOCUMENT_TOKEN_TO_BE_REPLACED

Yes, it’s been a while. Quite a while.

But I recently got a couple of monster books I want to share with people, and instead of going straight to those, I first want to complet this run of the Fiend Folio.

So, here we go, picking up where we last left:

The Cifal is a form of “colonial insect-formed artificial life”. Yeah, this one pretty certainly is one of the submissions to White Dwarf magazine. It’s a swarm of insects that has combined into a single humanoid form. When damaged, the creature will burst apart and transform into a swarm of flying insects which do not attack, but reassemble into a new form after a short time. By hitting it quickly it can immediately be dispersed again, but with every round it regenerates 2 hit points. Repeating that process long enough will eventually kill it, as it can’t regenerate indefinitly, but it seems a much better idea to try to kill the swarm with fireballs or something like that.

The Coffer Corpse looks like a zombie and is always found in some kind of coffin. If the coffin is opened, it will immediately wake up and try to strange the person who opened the lid and will not let go until destroyed. If it takes 6 points of damage in a single round, it collapses as if dead, but will get back up on its feet the next round (which I believe is 1 minute in this game), which causes anyone nearby to make a saving throw or flee in terror. The coffer corpse does not actually regenerate any damage, though.

END_OF_DOCUMENT_TOKEN_TO_BE_REPLACED

It is no secret that the classic character races in Dungeons & Dragons, consisting of human, elf, dwarf, and halfling, are taken from The Lord of the Rings, as well as the standard enemies of orcs and goblins. However, a huge number of other creatures from the many Monster Manuals are neither original creations, nor taken from various mythologies as well. A great number of monsters and critters has been lifted directly from literature, a method that was at least continued until 2000 with the first Monster Manual for the 3rd Edition. Which is a completely legitimate thing to do, and there are countless of appearances in videogames of creatures that are very clearly beholders, which are one of the most famous original creations of D&D.

However, as I’ve been reading some older fantasy stories this year, I had a number of “Hey, I know that thing!” moments, and I think it would be interesting to share those.

The bestiary for the Ancient Lands is taking shape nicely. Selecting the wildlife and monsters for a setting is a part of worldbuilding I find particularly interesting, but doesn’t seem to be given much attention most of the time. There seems to be a common tendency to throw in pretty much every beast and critter the creators find interesting, but personally I think that’s something that doesn’t really work well. I’ve been reading through the old AD&D monster manuals again some time ago, and those who always surprise me the most are the Forgotten Realms appendices. Those are meant to cover creatures specifc to the setting that are not covered by the regular monster books. However most of them ended up completely forgotten and never mentioned again in other books, box sets, and 3rd edition. It’s not enough to simply write up a creature, it also needs to be woven into the rest of the setting and become part of it.

Take for example Dark Sun, which has the kang, mekillot, and inix, which barely resemble any animals found on earth and have no special abilities. But they are memorable because they have a very important role. They are the horses and camels of the setting, which are used by everyone who is sane enough to not try crossing the desert on foot. Eberron has such unique creatures as the quori and the warforged, which could easily be dismissed as silly ideas, but are among the best known features of the setting because they play an important role in the world. Dinosaurs are implied to be existing in some remote regions in almost all D&D settings, but only in Eberron is their presence really acknowledged. By having a race of deinonychus riding halfling barbarians!

Quality goes over quantity, and I vastly prefer the approach of not adding anything to a setting unless it is relevant in some way.

END_OF_DOCUMENT_TOKEN_TO_BE_REPLACED

I was just updating my monster manual for the Ancient Lands and found a note that I still need to write stats for the Sand Bision.

I have no idea what a sand bison is.

The next item on the list is a Riding Goat, so it’s probably some kind of actual bovine, but I havn’t the slightest clue what I could have meant with the name. There aren’t even any deserts in the Ancient Lands!

Update: I believe I simply meant an upsized version of the regular old musk ox. 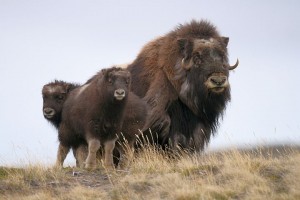