Knowing that the distance between two given cities is 800 miles generally isn’t very helpful in regards to really getting some degree of intuitive understand how big the area on a fantasy map really is. So to get a better impression, I overlaid the map of the Savage Frontier with the outlines of Northern Europe. 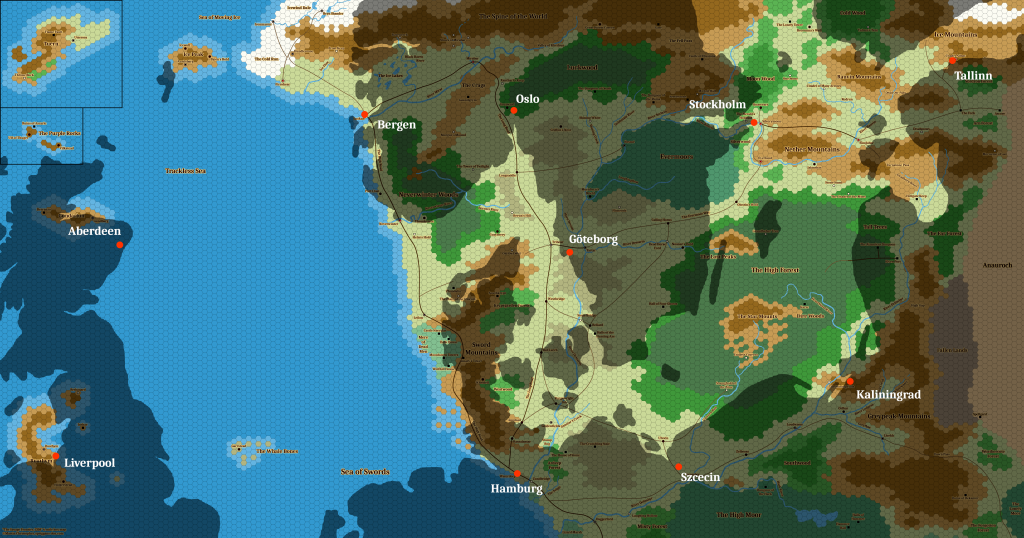 I think to have the best match for the environment and climate conditions, the map should probably be placed further north in Europe, but there’s not a lot of well known cities up there that would make for good reference points. Also, the large body of water of the relatively shallow Baltic Sea greatly moderates winter temperatures by storing a lot of energy during the summer. So when winter comes to the Savage Frontier, imagine it to be way colder than southern Sweden and Finland.

I used Hamburg as a reference point to place Waterdeep, and there’s a number of big European cities that line up quite nicely with various important towns in the North.

As said, climate-wise none of these would be good matches, but it gives some reference regarding the distances between places in the Savage Frontier.

The land area is about 420,000 square miles. That’s very close to Norway, Sweden, Finland, and Denmark combined, or three Germanys. Or roughly comparable to either Ontario, Quebeck, or British Columbia in Canada.

Also, the Evermoors are gigantic.

3 thoughts on “How big is the Savage Frontier actually?”