Reading in the Dungeons & Dragons Rules Cylopedia today, I got reminded of the relics again, which had been introduced in the Companion Set. In B/X and BECMI, only humans can take the cleric and thief classes. All dwarf and halfling characters and NPCs have the abilities of fighters and all elves the abilities of both fighters and magic-users. AD&D made the concession that these demihuman races can have NPC clerics, but in the Basic and Expert sets they have no access to cleric magic at all. To get them access to healing magic and protection against undead, the Companion Set introduced the relics. For the elves, the relic is a Tree of Life, for the dwarves it’s a magic force, and for the halflings a magic fire bowl.

Each relic has a single keeper, who is a regular NPC of that race, but who has access to special powers provided by the relic. He is able to cast spells that heal wounds, cure blindness and disease, neutralize poisons, and identify magic items. In addition to that, the relic is constantly using the Turn Undead ability of a 15th level cleric with a radius of 360 feet. Which is powerful to turn everything except for lichs and instantly destroys everything up to and including vampires. The keeper can use the spells almost unlimited, but every time he does the radius of the Turn Undead area shrinks by 5 feet and only returns by 5 feet per day. So the keeper has a very strong incentive to always try to keep the power of the relic close to its maximum and not cast cure serious wounds on every little bruise. 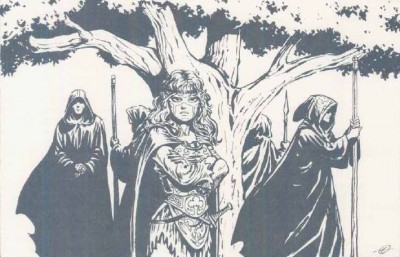 For my Ancient Lands setting I’ve never been happy with clerics, as their abilities really don’t fit as stand-ins for tribal shamans at all. Keepers are a totally different story though. They recieve their powers from a specifc object tied to a specific place, which serves as a conduit for divine powers. And it has a strong resemblance to many animistic religions and traditions. In the technical terms of antropology, the relics are idols. They are physical objects in which the divine force resides and which priests and worshipers visit in person to communicate with the deity. It is a temporary or permanent home of the deity and in some cases it’s actual body. I belive even in Greek religion it was believed that the deity is actually present in the statue that represents it in its temple. In other places, these idols are natural features, like mountains, springs, or unusual large trees or rocks.

In the RC, all elven relics are Trees of Life and all dwarven relics forges, and they all grant the same spells to their keepers. But that really doesn’t have to be that way. Not only can you easily change the appearance of each relic, you can also easily add a few more spells to their reportoire. Also, the Turn Undead effect could be replaced with a different power that is permanently active. The wonderful thing about it is, that it works at every level. It works for a small village shrine that simply has an idol for the spirit of the lake that lies next to it, and you can also have an idol inside a huge temple within a large city, which channels the divine power of the sun to the high priests. By chosing different appearances and powers for each idol, every local cult becomes unique and can have quite different means to protect itself against harm. Instead of a Turn Undead aura, the keeper could be given the ability to raise ring of growth of plants with a 360 feet radius around the idol, to raise and lower an impenetrable wall of briars as it is needed. You could have a shrine in a fortress that constantly puts a bless spell on any defenders on its walls. An a deranged cult that worships a horrific entity from the Underworld might have an idol that utterly defies description. In wilderness locations, an idol could take the form of a magic spring, a waterfall, or a giant tree. Or really anything you can imagine.

I think these idols probably work best if you don’t have any cleric characters at all in the setting. I personally would allow mages to learn cure light wounds as a 2nd level spell and neutralize poison as a 4th level spell, since player characters tend to get into trouble far away from any settlement and you generally don’t want to have the party constantly commuting back and forth during adventures. But any other cleric spells, like restoration, cure blindness, and raise dead, should only be available as miracles granted by the gods if a ritual is performed before their idol. And since most of these gods would just be relatively minor spirits of the land, not even all of them might be able to perform all of these. To raise someone from death, it wouldn’t be out of place to have the party travel to visit the archdruid at the oldest tree in the heart of the forest, or to descent into the Underworld to find an ancient shrine where a powerful demon is being held imprisoned.