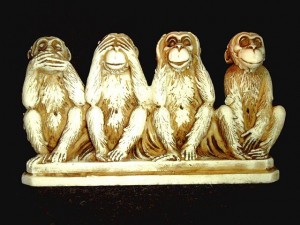 Reading a recent post from Bat in the Attic on the never ending topic of alignment in Dungeons & Dragons, one part did get me thinking:

What is good and evil? That is something each referee has to define. There is no right answer, my only firm recommendation is that there is answer and that it is consistent.

I had taken numerous classes on Asian philosophy and religion at university and one of the most interesting observations was that the concepts of Good, Evil, and Sin, as we are using them in European thinking and languages, don’t really apply in other parts of the world. They are frequently used in translations of Indian, Chinese, and Japanese texts, but such translations are both incorrect and misleading.

So why, instead of simply using mechanics as a rule in an RPG, not even taking the additional step and having a world in which not even the very concept of Evil exist at all? The concepts of Good and Evil assumes that there are universal rules, which can be followed or broken, and which have been put into place by some higher authority that is universally aknowledged to have the legitimacy to do so. This makes sense within Western and Islamic thought, where such a legitimized higher authority is assumed by default, even subconsciously by most people who rationally reject the notion. But in most fantasy worlds this is not the case and all you have is multipe higher powers that propose different views of morality and whose existance is universally accepted, even if most people chose to follow only the ideals of a specific deity. But without a single universal authority, you can’t have universal rules. Trying to enforce some kind of objective notion of Good and Evil seems arbitrary at best, and entirely inconsistent at worst.

Which is not to say that the majority of humans throughout human history did not have any notions of right and wrong. In Asian models of thinking you often find a related, but different concept of Beneficial and Harmful. In particular, beneficial and harmful for the pursuit of peace and harmony. Something that is harmful might not be considered evil, and some things that are good might not be beneficial. The concepts behind the monkes are of course not “see no Evil” and “hear no Evil”. The actual meaning is “do not watch harmfully, do nor listen harmfully, do not think harmfully, and do not act harmfully”. Yes, you can watch and listen harmfully. Being a spectator to bloodsports and public torture may not be Evil, as you’re not performing any evil deeds, but you still darken and corrupt your mind.

So why not have a fantasy setting in which Good and Evil do not exist. Not only not as forces, but also not even as concepts? In a roleplaying game, especially when you are running one in a homebrew setting, this is probably very hard to communicate to the players. But I think it might be a really interesting thing to attempt in my fiction writing. Most people would probably not notice it, especially in a Sword & Sorcery setting where things tend to get quite dark by default. But completely avoiding the use of the word “evil” really shouldn’t be difficult at all.