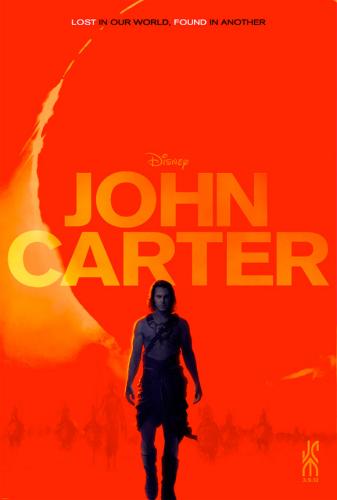 And starting with the visuals, this movie looked really good, at least on my humble sized screen. I just rewatched the Lord of the Rings movies on a projector and you can really see that CGI creatures have still advanced in the last 10 years. The green martians occasionally seemed to be missing any real texture to their skins in some shots, but I particularly liked that weird walrus dog. It only occured to me quite late in the film that I’d been watching a CGI-fest the whole time and I am usually rather critical and actively trying to look out for shoddy effects and animations.

But when it comes to the plot of the movie, I can clearly see why people would call it a bad movie. Like with Avatar, I finished the movie without being able to tell the name of a single character, except for John Carter, because his name is in the title of the movie. If you don’t remember the names of the main characters, that’s usually a sign that there isn’t any plot to follow and just effect scenes end on end. I am not quite sure, but I think the story is supposed to take place over a period of three years. The way the film is edited, it seems more like three days. Which of course leads to the common movie problem with the hero becomming a famous hero and powerful ruler, as well as getting married in just a couple of hours of contact with the world and people. There is also that strange framing plot of the nephew and the unneccessary long expositon at the start, but I am not sure how much that is taken from the source material or was added to the movie because the creators thought it a good idea to establish more context for the audience.

As I mentioned before, I don’t really know anything about the books. But even so I had the very strong impression that most of the roles had been miscast. Can’t exactly tell why, but it seemed to me that there were lots of really interesting characters who had all been played by unsuited actors. And oddly, the characters that were best played where the three major green martians. The guys who were entirely CGI. In the same way, it also felt like a quite interesting story that had to be condensed into a rather poor skript. There had been a couple of important scenes from the books that the creators had decited to have to be in the movie and then they had to find a way to make it at least a somewhat coherent plot.

While I have much more bad things to say about the movie than good things, I still quite enjoyed it. In a genre in which pretty much all movies are crap that have some camp value at the most, John Carter of Mars actually ranks pretty high in quality. Among the pulp story movies, it doesn’t reach up to Star Wars and Indiana Jones, but I think it can at least come quite close to Conan the Barbarian in fourth place. Not a great movie, mind you, but if you enjoy these kinds of films, you have to be greatful for what you can get.

But I think the best reason to watch this movie is that it really made me want to read the novels. I’ve gotten quite lazy when it comes to reading (I never actually read the Conan stories, just the comic adaptations by Dark Horse), and so I’m not picking up a new series easily. (Maybe Wheel of Time some day?) But John Carter of Mars looked to me like a rather poor adaptation of a much better story and I am definitly going to read at least Princess of Mars in the very near future.