I wanted to write this post a long time ago, but somehow I never got around to actually do it. The upload date on the image files is from over one and a half year ago. Such is the life of an AD&HD gamemaster. 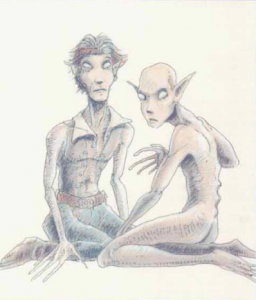 I first encountered doppelgangers all the way back in my first introduction to RPGs, and really to fantasy other than The Lord of the Rings and kids TV shows, Baldur’s Gate. They are pretty prominent monsters in the last part of the game and apparently meant to play a big role in the story, but while their appearance looked really cool to me, the way they were presented was rather strange and felt quite disappointing to me even back then. They are these grey naked humanoids that can assume the appearance of other people and have at least some degree of telepathic ability to read your mind, which helps with impersonating the person convincingly. But in the game, you see people you know in the middle of a dark dungeon where they shout incoherent mad ramblings at you and then drop their disguise to charge at you with their claws. What was that all supposed to be about? There is another semi-hidden quest involving doppelgangers infiltrating a merchant company and wasting all its money in bad trades, as an attempt to help a rival merchant company to rise in power. That works better, but they still were really not subtle about it at all. And again, they drop their disguises to attack with their claws as soon as you confront them about something fishy going on.

In the 3rd edition Monster Manual, doppelgangers have one of the coolest illustrations in the book. I love all the Sam Wood illustrations in the book, but I think the Di’Terlizzi interpretation from 2nd edition still looks like a more interesing monster. But this was the first good closeup view of a doppelganger that I’ve encountered and it made me fall in love with them even back then. But even getting proper descriptions of these creatures from the 3rd and 2nd edition monster books, I still found them a bit difficult to make sense of. As described, doppelgangers are a race of humanoid creatures who have the ability to assume the form of humans and other people, and use this ability primarily to replace rich people and enjoy a life of luxury for as long as they can keep up the deception and the money doesn’t run out. Basically just being social parasites. Alternatively, they sometimes offer their services as mercenaries to spy on the enemies of their employers. 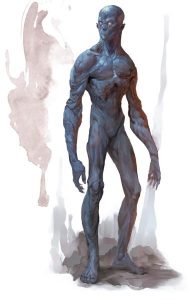 That does make some degree of sense, but I also find it really disappointing. Just look at these weird alien things with their featureless faces and blank eyes! They could be anywhere and anyone, with no way to tell how many of them there are and for how long they’ve already been in a place before their presence was discovered. And all they want to do is to eat other people’s porridge, sit on other people’s chairs, and sleep in other people’s beds? That’s so lame. These are some nightmarish horrors from that come to replace your friends and family and you might never even know it.

I always like to approach worldbuilding with the assumption that the world came into being as a product of more or less natural processes rather than the deliberate work of a creator, and that the supernatural forces at work in the world are vastly older than even the primitive ancestors of the civilized peoples inhabiting it today. Monsters existed long before people walked the earth, and any abilities that are directly targeted at humanoid victims would have evolved in these creatures alongside the mortal races. Comfy town houses for doppelgangers to infiltrate are a fairly recent new thing in mortal society, and an ancient creature perfectly adapted to infiltrate cities and palaces wouldn’t make much sense. And that raises the question of what doppelgangers would have been doing all day for the long eons in which mortals inhabited caves and roamed through the wilderness searching for food. There wouldn’t be any space for these creatures as they are commonly described and what would they use their unique ability to replace people use for instead?

There is a really simple and obvious answer to this question: To feed on the flesh of people. 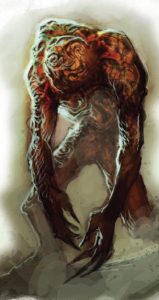 The ability of doppelgangers to perfectly mimic the appearance of people, and to read the minds of people they approach to impersonate a person without acting suspiciously, is a perfect mechanism to get close to their victims and to lure them away from groups where they can kill them without being noticed. And then continue to devour them. When suspicion arises, the doppelganger can simply assume the appearance of a different person. Not only does it make it impossible for searchers to find the real murderer, it also leaves them with a false trail to the person last seen with the victim. A doppelganger that plays things careful and smart can feed on a single community for months before it becomes too dangerous and it disappears silently into the night.

The description of doppelgangers in the Basic Rules say that they assume the form of a PC and attempt to kill it, and if they can do it without being seen, they will use that PCs appearance to get close to others. That just doesn’t make any sense. If you take the appearance of your target it’s really the most straightforward way to tell it that you are some kind of shape stealing monster. This is just stupid. When you can immitate anyone, at least make an attempt at pretending to be someone trapped in a dungeon and in need of rescue. The players might not fall for it, but immitating the person you’re about to attack is literally the worst possible shape to pick.

A doppelganger as a monstrous spy or assassin hired by a villainous antagonist, perhaps even unknowingly, still is can make for really cool adventures. But it all becomes much more interesting and many times more creepier if the doppelgangers are not motivated by laziness but by the taste for human flesh.

Shape stealing: Can adopt the form of any human-like creature (7’ tall or less) observed.

Trickery: Will attempt to kill a PC, retainer, or hireling, take on their role, then lure further victims away from the group.

Reversion: If killed, reverts to its original form.

Also, in the fantastic awesome movie The Thing, why are they always talking about “the Thing”. Clearly there are multiple of it running around, as at least two of them are seen to be killed.