There’s probably some great, witty title for this, but I can’t think of any right now.

One of the lesser known, but really common effects of ADD that isn’t much talked about, is a significantly delayed development in people becoming functioning, independent adults, even if they don’t show any other apparent mental development issues. From what I’ve heard from other people, it is widely seen as something that will eventually work itself out, it just takes noticeably longer than for other people. (I think I recently saw a study that some 60% of university students with ADD drop out at least once.) I finally started my first regular, full-time and full-pay job, that isn’t some kind of occupation training or work integration measure, at the start of this year, now being in charge of quality control and inventory maintenance at a major online retailer or pond and garden plants.

Last Thursday, at the end of my fourth week, I was quietly working away on some regular busywork, when I had the sensation of having arrived at my destination, after wandering aimless in the wilderness for some 15 years. And to me surprise, the place where I arrived looks just like where I originally started. Having recently combed through my whole music collection to fill my phone with as much stuff as I can fit on it for my car rides to work, I rediscovered a lot of old music that I’ve been playing up and down back when I had finished school but hadn’t listened to in years, and I’ve also been playing a lot of my old favorite videogames from back in the day. And just in the last two months, since I started working on my new Shattered Empire setting, I’ve been rereading various old D&D books that hugely inspired me back when I first started learning the game in the early 2000s. It really feels a lot like my life is just like it was back when I set out to see where life would take me, except that now I got a much better grasp of my life, I’m a trained professional in a field with severe labor shortage, and got a decent income.

It currently feel a lot like picking up back where I left off all those years ago. Turns out you can go home again!

Which finally brings me to my actual point. This book. Somehow this completely slipped my mind when I made the list of reference sources to use as inspirations for the Shattered Empire. The Manual of the Planes is the only 3rd edition book that isn’t a setting book that I still own in print. This book came out very early in 3rd edition’s run, only a year after the three rulebooks, and was hugely influential to me. I had played some Planescape: Torment before, which certainly was a very memorable experience for me, but also a game that’s really hard to get into. (I still have not completed it to this day.) The Manual of the Planes was my first comprehensive introduction to the planes of D&D. While it shows all the planes and describes many of the locations from the Planescape setting, its version of the planes is deliberately made much more generic, to easily plug into any campaign and appear more streamlined with the other 3rd edition supplements. For example, Sigil is only mentioned in a short paragraph, and the Factions aren’t covered at all. Which back then I found somewhat frustrating, but I now think really made this book, and the concept of planar adventures as a whole, much more accessible.

I think it’s quite fair to say that together with the Monsters of Faerûn, the Manual of the Planes is my favorite D&D book that I ever read. I was young and impressionable, and there is something about this book that really made it stick in my mind ever since. The whole art direction and presentation is an advanced glimpse at what would become the dungeon punk style that really takes off in the revised 3rd edition a few years later, and in my opinion had a huge impact on the perception of what D&D is ever since, but I think in this book it feels very appropriate and really works. 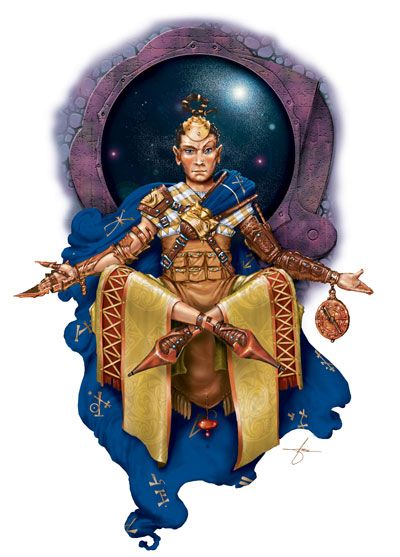 While the Great Wheel arrangement of the planes from Planescape is of course a classic, the Shattered Empire is very much meant to be just another generic D&D setting. Informed and inspired by D&D, but not a representation of D&D. And I’ve been on record that the alignment symmetry of the Great Wheel actually leads to it being crammed full with really boring stuff. (Whose ever been on adventures to Bytopia or Arcadia in a non-Planescape campaign?) I played around in the past with the idea to run a campaign that only uses some of the less popular planes that I find the most compelling, but nothing ever actually came of that. But now that I need to figure something out to do with the other realms of reality from which warlocks gain their powers, this feels like another great opportunity to take out that old idea again.

One thing that has always bugged me about the planes in 3rd and 5th edition is that the Ethereal Plane is just so damn boring. The concept is interesting, but by it’s very nature, the plane is completely empty. There’s been some attempts over the years to at least populate it with monsters, but those bizarre weirdos never got any traction, being just too weird while also being too bland. In contrast, the Plane of Shadows is a much more interesting place, that has actual terrain in it. For the Shattered Empire, I made the decision to combine the two planes into one, called for simplicity The Shadows.

The Shadows behave mostly just like the Plane of Shadows does. (Or the Shadowfell, exactly the same thing.) It’s a dark world without color whose terrain almost mirrors the world of the Material Plane, but not quite. It’s subtly distorted and not a completely perfect match in where everything is and how its shaped. It’s an imperfect reflection that can slowly and gradually morph into slightly different shapes and arrangements. One cool idea, that I’ve never actually seen much done with, is that there is only a single Plane of Shadows that connects to all Material Planes, not just the one the PCs are from, and that you can simply keep walking through the shadowy landscape and eventually come out in areas that correspond to completely different worlds.

To this baseline, I am adding the trait of the Ethereal Plane that you can actually see from the Shadows into the Material Plane and observe the living creatures moving around in the other world. Looking through the Player’s Handbook for 5th edition, it seems like any magical effects that target the Ethereal Plane can simply be redirected  to the Shadowfell without causing any meaningful changes or complications. The aspect of the Ethereal Plane that you lose with this setup is that the Shadows have a ground and gravity, so you can’t simply fly around by the force of your will. Having buildings exist in corresponding locations in the Shadows also means that you can’t use the Ethereal Plane as a means to move through walls or doors. However, if the Shadows are only an imperfect and warped reflection of the Material Plane, there can still be large enough gaps and holes in the Shadows that allow passage through barriers that are impenetrable in the Material Plane. And I believe this only really becomes a factor with etherealness spell, which is at a level way beyond the scope of the Shattered Empire setting.

The Ethereal Plane also happens to be divided into the Border Ethereal, from where you can see into the Material Plane, and the Deep Ethereal, which is just a vast void of nothingness. This actually corresponds very well with the concept that you can travel through the Plane of Shadow to reach other Material Planes. This Shadow version of the Deep Ethereal is called The Void in the Shattered Empire. Though without the ability to float through the emptiness, things get a bit more wonky. My idea is that there are patches of darkness found throughout the Shadows where the reflected environment of the Material Plane fades away rapidly, and as you keep moving forward into the blackness, the whole concept of a ground beneath your feet becomes increasingly abstract, until you eventually find your feet no longer making contact with anything solid and you no longer need to even move your leg to continue moving forward. With no more visible landmarks to follow, finding your way in the Void by ordinary means becomes effectively impossible. It’s easy to become lost in the Void forever, and even if you happen to eventually reach the Shadows again, it might very likely not be the Shadow of your own world. And even if it is, there is no way of telling which area of the Material Plane your new position corresponds to.

The number of other worlds that can be found by traveling through the Void could potentially be limitless. But a few of them are known, which are the homes of aberrations and fiends. I don’t think I’ll be using the concept of layers for planes. Instead every such other plane is only a single layer, just like the Material Planes. I’m not even sure if the distinction between material plans ad outer planes has any meaning in this kind of planar setup. I’m also not sure what really becomes the difference between aberrations and fiends, and what’s the difference between supernatural creatures from the Material Plane, such as lamias or unicorns. Maybe there won’t be any. Before 3rd edition, there really weren’t any such distinctions and classifications to begin with, and that worked just fine for decades.

The worlds of fiends and aberrations are a great place to finally make use of some of my favorite places from the Great Wheel. Gehenna, Carceri, and Pandemonium all fit quite perfectly with the kinds of horrific hellscapes that I have in mind. But Ysgard and the Beastlands also make for good places that could be found by traveling through the Shadows and passing through the Void, which are not quite as hostile but still home to strange beings not normally found in the Material Plane.

What I think this setup really doesn’t need is either an Astral Plane, as this function is already well covered by the Void, and any elemental planes. I like the four elementals as monsters, but creating a whole new class of planes just to justify their existence really doesn’t seem necessary. I like this basic setup quite well as it already is.

Maybe there will be a more detailed update on this in the future. But I see it as very possible that the future parties exploring the Six Lands will never make it any further than short diversions into the Shadows of their own world, and as such these things might never actually need to be made more specific.