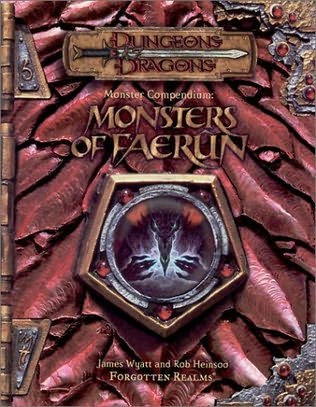 I wrote about the Monsters of Faerûn book for Dungeons & Dragons 3rd edition from 2001 before in my Fantasy Safari series. At 96 pages, it is to my knowledge the shortest and also only softcover monster book that was released by WotC. It followed the original Monster Manual for 3rd edition and would be succeeded by five more full sized books for that edition. A while back I was asking around in some places about how often GMs have actually been using creatures from the additional monster books beyond the main Monster Manual, and everything I could gather from the replies strongly pointed towards “barely”. These books are fun to read, but at the end of the day, people clearly seem to continue to strongly stick towards the established critters that have been in regular rotation for over 40 years now. But even in that light, Monsters of Faerûn seems to stand out as even more obscure than the other monster books, quite possibly because it’s much smaller and because the title indicates that it’s a setting specific book for the Forgotten Realms. Which is not actually the case. There are a few creatures in it that are specific to factions in Faerûn, but these of course work just as well anywhere else, and the majority are simply somewhat popular D&D monsters that had not made it into the Monster Manual.

Since I started with D&D right when 3rd edition came out (I remember deciding to wait a few more weeks instead of getting the 2nd edition books), and as such this was my second monster book ever. That might have had some impact on how memorable it was too me. But I had also been introduced to D&D by playing Baldur’s Gate, and that game had a few creatures in it that were not in the MM, but in this book. Even though I don’t recall using much, if anything from this book back when I ran 3rd edition games, but it always excited me every time I was thinking about it again, or picked it up for another read. This has so many creatures that I always wanted to use some day.

When I started working on the Shattered Empire setting two months ago, I didn’t deliberately plan to do it, but I recently realized that a lot of these “I want to use them one day” monsters ended up on the monster list of the setting, even though I got their stats from 5th edition books. I admit to not actually having read those. I’m only using the stat blocks, going with my preconceptions of what these creatures are from the last 20 years.

Aaracockra are a quick and dirty reskin job to get harpies without the enchanting song ability, that really belongs to sirens.

Air Genasi more or less make an appearance as the Kuri people, though they are actually using the stats for high elves as PCs.

Chitines have always fascinated me, even though their image in this book isn’t very good. Small primitive humanoids with six long spidery arms that crawl along the walls and ceilings of caves. What’s not to love about these creepy crawlies, which I think make a good alternative to the regular goblin and kobold fare.

Choldriths are the elf-faced spiders that often rule over chitines as their priests. It’s a different take on the general idea of driders, but since my setting doesn’t have any drow either, I think these make for a better alternative.

Cursts are a bit like ghouls or revenants. They are under a curse that always regenerates them into their undead form over the course of days and have gone somewhat mad from the torment of their unliving existence. The only way to actually kill them is to break the curse that is on them. But mostly I just think the picture kicks ass. 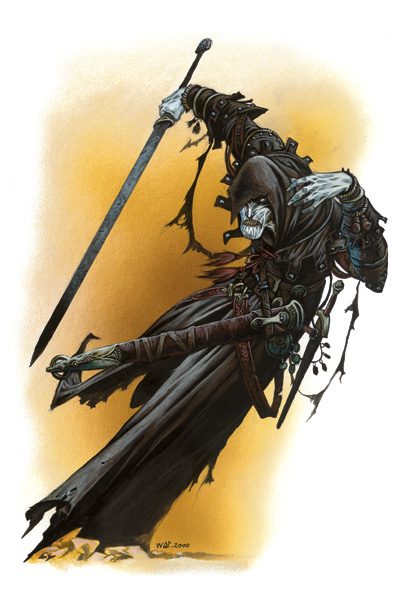 The Dark Tree is just a classic of fantasy. Never an A-list monster, but always around. The image in this book is really goofy, but I’ve always been hugely inspired by this one of a different monster that’s still the same basic idea.

Dread Warriors are really just beefed up zombies kept in better shape and with some intelligence remaining to make them more useful soldiers for necromancers. Nothing that spectacular, but I like to use them as corpses animated by low-intelligence demonic spirits.

Earth Genasi, like the air genasi, appear in my my setting as one of the civilize people. Though again, I am using the goliath stats for PCs instead.

Fey’ri are a specific bloodline of high elf tieflings from the Forgotten Realms, with some cool backstory of being the last remnants of an old noble house that made pacts with demons. Again, it was really an image from another book that sold me on these guys, but they appeared in this one first. They appear in the Six Lands as the asura, with somewhat different stats, but it’s really pretty much the same guys.

Gibberlings are basically the first monster you encounter in Baldur’s Gate, and there’s a lot of them in that game! Which had me a bit surprised to later learn that they pretty much don’t seem to appear anywhere else. But they are in this book, and I still love these little screetching guys as low level enemies.

Green Warders are a bit lame, actually. They are elf shaped shrubs who were used as guardians by the elves of Myth Drannor. But they have magic powers to cast alarm, confusion, and sleep in addition to attacking with their claws, and I think make a decent base to make custom spriggans. The leafy boy type, not the size changing goblins.

The Helmed Horror is another memorable monster from Baldur’s Gate. Basically it’s animated armor that’s been beefed up to a serious juggernaut with a big magic sword. These are clearly my favorites among the menagerie of golems. Badass image doesn’t hurt either. 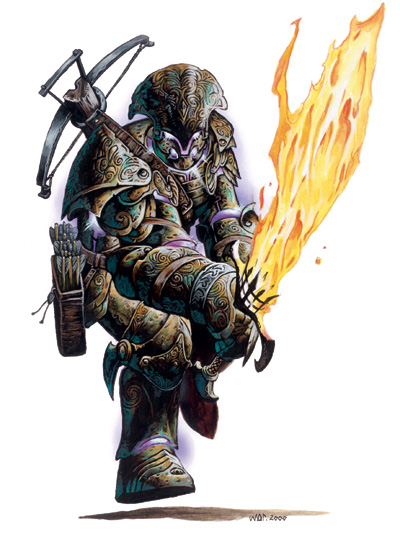 Quaggoths are albino humanoid bear-apes that live underground. There really isn’t much more to them. But I think they’ve still been really underused as one of the underdark races as they add some nice variety. Why are there bear-men living deep underground among the fish-men, spider-things, and squid-thingies? No idea, but I just think they’re neat.

There’s a good more cool monsters in Monsters of Faerûn, these are just the ones that are featuring prominently in the worldbuilding for the Shattered Empire. But there’s also aballins, baneguards, beasts of Malar, darkenbeasts, deep dragons, firenewts, ghaunadans, phaerlin giants, and draegloths, which are all really cool as well, though not really fitting into the world I am creating. And I really love most of the art in this book, though that might to a good degree me being biased from my strong first impression. Though I still think it’s overall a much more memorable monster book than the actual Monster Manual that preceded it.

3 thoughts on “My favorite Monster Manual”