After having started with metaphysics, philosophy, and the undead, I’m continuing the introduction to Planet Kaendor with drugs. Perhaps a somewhat unconventional way to open with, but perhaps this might be indicative of the kind of setting this world is morphing into.

Skok is a thick black liquid that looks and smells like burned plum jam and has a faint but burning taste of bitter roots. It’s often mixed with water to make it possible to drink without sticking to your mouth for the next half hour. 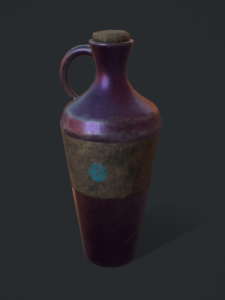 Skok keeps people marching when they would otherwise collapse from exhaustion and there are many stories of people crawling half-dead from the wilderness who would never have made it nearly as far without their bottle of skok. The extra boost that it gives the body has to be paid back later though, and the lingering exhaustion can last for weeks.

Characters about to die from suffering System Stain beyond their maximum can save their lives with skok, but their recovery back to full health will take longer.

Blue juice is really more like a very dark red, though when mixed with goat milk or staining cotton or hemp cloth, it turns into a slightly bluish purple color giving it its name. Blue juice comes from the tiny fruit of a swamp plant and tastes like unripe berries which is quite revolting to drink, which is why it’s often mixed with goat milk and a bit of kesk honey. It’s quite a potent painkiller and in larger amounts causes severe drowsiness to the point of making people nod off while having severe injuries getting treated.

Characters drinking a good amount of blue juice roll twice for all Mental saving throws to resist manipulation for the next hour (6 turns), but also treat any skill checks as untrained, suffering the usual -1 penalty to the roll instead of their skill level. At the end of the duration, the characters have to succeed on a Physical saving throw or fall asleep, though they can be woken up by others as usual.