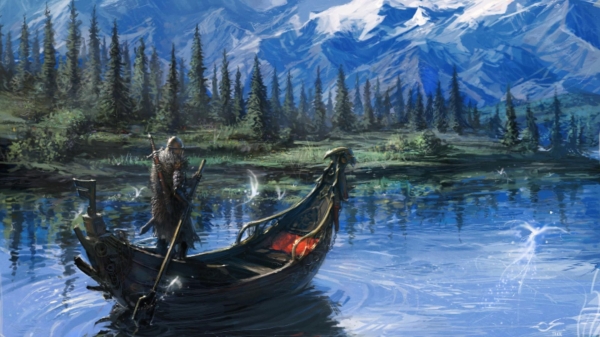 So, if you have a setting idea that is not centered around kingdoms and cities, what other reference frames can you use to give structure to the peoples and societies of a vast wilderness setting? How about rivers? All the earliest civilizations of the Bronze Age first appeared along the largest rivers in the old world because big rivers are really really useful. They provide a steady source of water, which in the sub-tropical zones where you find these civilizations can otherwise be quite a problem. But they are also extremely useful for transportation. Rivers allow you to transport large quantities of cargo just as easily as by rail. Load all the stuff on a boat, add a sail or go with the current, and wait until you’ve reached your destination. If you have goods to move, rivers are the way to go. Or to float. While water isn’t as much a problem in Central Europe, the region between Germany and France has been constantly contested for many centuries because it’s the origin of the Rhine, the Seine, and the Rhone, having easy access to the North Sea, Atlantic, and Mediterranean.

It’s been one of the design elements for Planet Kaendor very early on that all civilization has to be on rivers or the coast, with the deeper forests being more or less inaccessible for heavy cargos. When I was thinking of city states, I was mostly thinking about the coasts and large ports, but that’s not where the adventure is. Adventure is deep in the forests where the ancient ruins are hard to get to. I am now thinking about moving all the pieces on the map to correspond to three huge river systems and one archipelago of islands of the coast. I really like ocean beaches, but Planet Kaendor is meant to be a forest world foremost. While there won’t be any along the major rivers, there’s more than enough in the islands region. While I have plans for a sub-arctic and a tropical forest set in Kaendor, for practical reasons it makes the most sense to only go with the temperate-subtropical one for now. I think any single campaign is best served by being based entirely on a single river. 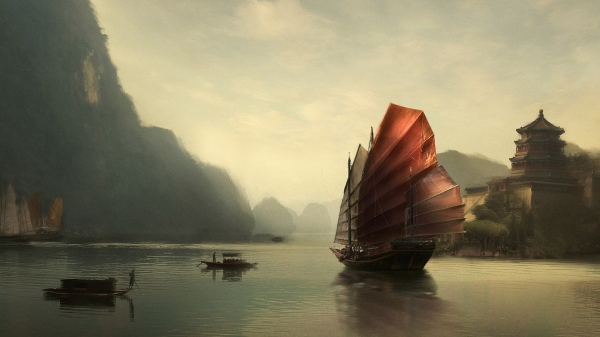 Since this first river is located in what I used to call the Dainiva forest, I’m going to call it the Dainiva river here for convenience. And since nothing is a permanent as a temporary fix, that’s probably now going to be its name forever. The great Dainiva river has been the home to many great civilizations over the ages. Cyclopean castles of the giant Rock Carvers overlook the river from cliffs towering over the meandering courses of the upper rivers, with the lower river being home to many old Naga cities. Ruins of the sorcerous Tower Builders rise above the dense trees flanking the river banks, as well as the magnificent living citadels of the Tree Weavers. All these civilizations have long ago faded from history, and it was many centuries after the Naga retreated to the jungles of the south that mortal peoples began settling on the lower banks, gradually but cautiously moving into the abandoned palaces of the serpentmen. Among the ruins they discovered the arts of casting bronze and mastering the secrets of alchemy, leading to the rise of the first mortal civilization. Over many centuries and generations, explorers ventured further up the waters, but even a thousand miles upstream, there were still no signs of the headwaters of the major branches. Only more water and trees, and the wrecks of explorers who had gone before them. And more ruins and monsters. 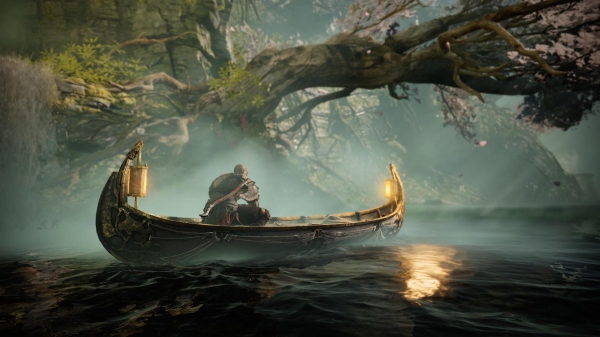 A setting of this type is perfectly suited for pointcrawls. Since travel is basically linear along the river branches or their banks, and ruins have to be visible from the river for characters to have any chance to find them, using a hexmap would not provide any actual benefits. Instead, a map showing the various main branches can show the distance between any fork, settlement, and ruin right next to them, and you can also use color to mark different types of water. For example, the common speed for rowing a canoe with no current is given in most places as 3 miles per hour. Currents of 1 or 2 miles per hour also don’t appear to be anything unusual, and while many rivers are much faster, the current generally is slower when you stick close to the shores where it’s more shallow. So you can mark the river conditions in three colors. Dark blue for the slowest water, in which rowers go 2 mph upstream and 4 mph downstream; medium blue for faster water, in which rowers go 1 mph upstream and 5 mph downstream; and light blue for waters too rapid to paddle against, that require continuing on foot. But you could still build a single-use raft from trees and go downstream at 6 mph. If you want to, you can also convert straight from miles per hour to miles per day, if hourly precision isn’t desired, but if you don’t have to deal with things like traveling 2.33 hexes in a day, I think tracking distances by the mile isn’t really any nuisance. On the major branches of a river of this size, there is easily more than enough room to navigate large cargo ships like a junk. With a slightly more sophisticated sail than just a plain square cloth, it is possible to sail up a river against the current, even with quite moderate wind coming from the sides. Merchant ships like these would replace the trade caravans seen in many land-based settings.

Settlements are all either directly on the river or at least have an accessible pier that connects to the actual village by a short path. Since they would want to be visited by traders, such piers would be clearly visible. But you could also have lairs of rivers pirates or secret cults hiding in barely visible side branches much too small for larger merchant ships. With civilization being based along the lower river near the coast, settlements become more scattered and smaller in size as one travels upstream. This can be used as a great indicator for players about the dangers they can expect to encounter. In civilized areas on the lower river, big monsters have long been driven out, but all the best ruins have been picked completely clean generations ago. But on the upper river, few mortals have ever set foot and there are both more dangerous monsters and much greater treasures to be found. 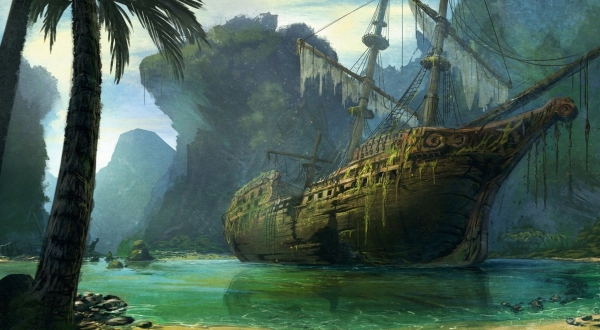 Since traveling on water is relatively simple and allows for the transport of great loads with little effort, I think a campaign of this type works best if you make it really big. Make it a river as big as the Volga, the Mekong, or the Columbia, where characters can go exploring for months between the end of the spring floods and the onset of winter. With the help of rafts, parties will be able to return with huge hauls of treasure, so the journey back to civilization should be a long one to compensate. Bigger hauls should translate to fewer hauls.

Basing a sandbox around a river system is also really convenient for a GM. By its nature, its close to a fractal, allowing you to just keep expanding it with more and more side branches as the party continues exploring upstream. A river map does not have to bother with mountains or elevation, and generally there’s no need to be exact about the width and depth of the water. And if you should end up with a branch that gotten too narrow and shallow to continue on, the party can always go back downstream a couple of miles and go up another branch. Now for the lower river, I think the players should have a map of the main branches and major side branches, as those are areas frequented by river merchants making their regular round. But once you leave civilization behind, there’s no limit for how far you can continue.

Similarly, it’s very easy to create villages and ruins in a vacuum and just plop them down on the map wherever the players decide to go. That goes a bit against the common ethos that players should have control over where they go by making informed choices, but I think in a setting like this, there really are not a lot of choices to make. Check it out or continue up the river? And given how many branches a river system of this size has, I don’t think working with fixed locations would actually be feasible. You’d end up with a lot of “this branch gets too narrow to continue and you’ve not seen any signs of a ruin”. That’s not player agency either. You could very well establish some facts about a ruin when the party stops at a village or trade post and gets a tip from the locals. But there wouldn’t be any need to establish any of this before the party arrives at this part of the river. 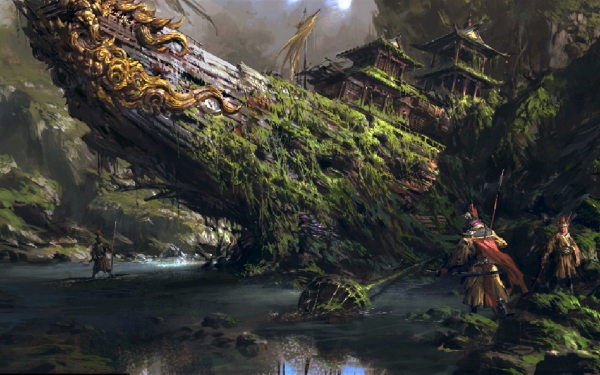 I think for a campaign of this type, random encounters might actually the bread and butter of many adventures. Ruins are cool, but when slowly travel up a river for hundreds of miles, you’ll be doing a lot of encounter checks.

In a world with river merchants, you’d also get river pirates. Those pirates would know not to bother explorers going up the river in the spring, unless they are desperate for supplies, but be waiting to pounce at any explorers coming back down the river in the fall with their big hauls of loot. Merchants might invite the party to get a free ride with no paddling on their ships in exchange for protection against pirates while they have the same route. On the upper river, you can have encounters with aquatic and semi-aquatic humanoids, who could either be friendly or hostile to rare visitors from downriver with goods to trade. There can be the wrecks of failed expeditions, which might even be salvageable and be sold for a huge profit if floated down the river without sinking. Or repaired and used for further expeditions the next year. Or there could be ancient crumbling dams from the old civilization that threaten settlements downstream with disastrous floods, allowing for some variation between dungeon crawls.

And then there’s of course the river creatures. Obviously crocodiles and big snakes, but I’m really giddy at the idea of giving players a paralyzing phobia of hippos. Someone suggested to me adding dire beaver dams to block of some rivers and require hauling boats over land to continue. I also really like the idea of creatures in the trees following the players in their boats from shore, waiting for an opportunity to attack.

It really is a fairly simple concept for a sandbox setting, but one I think has huge potential, while looking very manageable at the same time.

One thought on “Row, row, row your boat, bravely up the stream”