Vampire: The Masquerade was created at the start of the 90s, with the first rulebook explaining it’s stylistic and aesthetic vision as “Gothic-Punk”. Some years ago, I had a long discussion with several people about the very question if this overall dominant style dates the game so much as a product of the 90s that it would no longer work for current groups of players unless you deliberately aim for retro-nostalgia. I think it was when I saw something or another about Bloodlines 2 (a Vampire videogame currently in development), that I had the thought whether the Synthwave aesthetic of recent years could be a viable way to transform Vampire into something that evokes very similar conceits in the present day. 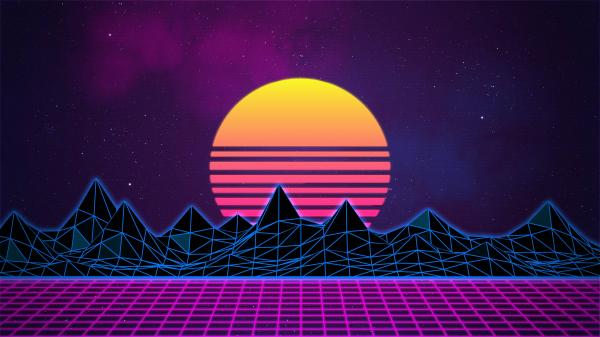 Synthwave is a electronic music style that came to prominence in the late 2000, which makes heavy use of synthesizer sounds that strongly evoke the sound of 80’s electronic pop, and was hugely influenced by the music from the movie Blade Runner. But it uses these references and influences as a starting point for something that is new and actually quite different rather than being actual 80s retro music. For reasons unknown to man, Synthwave also has an extremely distinctive aesthetic for album covers, dominated by abstracted vector-graphic shapes in bright pink, blue, and orange. 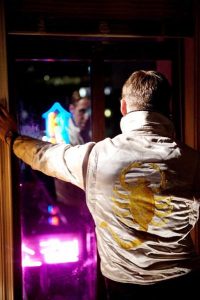 While I personally think it’s very cool music, it also has a strong overlap with various visual arts. Probably the two most influential places where Synthwave got mainstream exposure are in the movie Drive from 2011 and the videogame Hotline Miami in 2012, both of which combine extremely brutality with detached coldness in a world of extremely evocative colors and lighting. Again, it is a style that is very reminiscent of Blade Runner, which also just got it’s own return in 2017, again with stunning visuals and sound. A similar style was also used earlier in Collateral from 2004, and in the super successful John Wick movies. 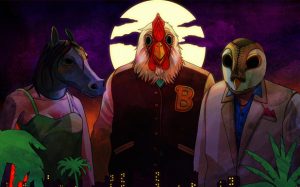 I think Neo-Noir and Synthwave in 2020 are really the spiritual successors that Gothic and Punk where in 1990. Back then, the name of the game was radical extravagance. Clothing, hairstyles, and makeup all carefully crafted to the smallest detail to be as eye catching and provocative as possible. Punks look dirty and sit on the curb with broken beer bottles, but their outfits are as deliberately designed and customized as the most dolled-up goth. Make no mistake, goths are totally aware that their outfits with full war paint makes them look like lunatic weirdos to most people. That’s entirely the point. And I think this is something that doesn’t really translate properly into the 21st century. It no longer comes across as edgy, just silly. Street gangs are no longer the boogeymen of the middle class, and today’s youth has more serious concerns than rebellion without a plan against the establishment. Maybe society has become more open to individual expression as well, and when your outfit can no longer provoke the boomers, then what’s the point of spending all these hours on it? 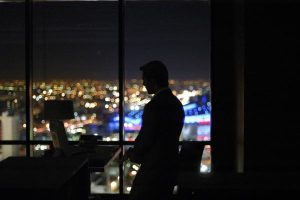 But while the typical Brujah and Gangrel styles may no longer be considered the cutting edge of what is cool, I think we’re currently at a point in popular entertainment that gives the stage to Ventrue and Tremere. It’s now the time of nice suits and Mercedes. When you can’t beat them, joining them starts to become attractive. Even if you first tell yourself that it’s to beat them at their own game. You also have that look in Kingsmen and the current James Bond movies, which despite being about public servants leaving carnage across the world in service for their states, really don’t have any love for authority.

It’s probably not quite an aesthetic you can go for with an Anarch campaign. But for a campaign centered around Ventrue, Toreador, Tremere, and Lasombra, I think this is perfect! And when you think about it, John Wick and his pals are living in their own Camarilla. And vampire society in the World of Darkness has always been filled with endless parallels to organized crime. 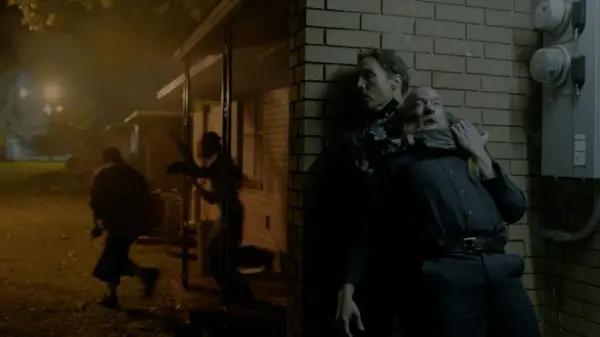 But Vampire is not only a game about politics. While it often seems to be forgotten and glossed over, it also presents itself as a game of horror. Big influences on me for what I imagine horror in my campaign to feel like are True Detective (Season 1, of course), and also Twin Peaks. I’m probably not able and also have no intention to make something as funny as David Lynch, but I really like the sense of eerie wrongness and malevolent evil in that show. 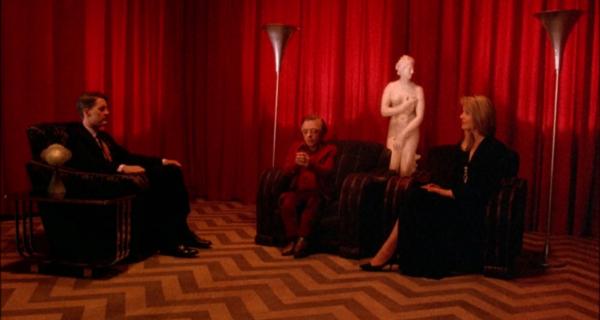