It’s starting to take shape. It’s still all very vague but writing these things down always helps me turning wild collections of general ideas into concrete design decisions and finding the spaces where there are still elements that need to be filled in. This is as much work in progress as it gets, but I really like how things are going so far with the design of this new setting.

The world takes many inspirations from the Eastern Mediterranean Bronze Age, Ancient China, and Morrowind. It’s an age where civilization is relatively small but already highly sophisticated. There are large fortified cities with grand castles and temples, institutions of administration and learning, organized armies, and complex international networks of trade. Yet at the same time, civilized lands make up only a very small part of the huge land masses of the world. Beyond them lies a vast expanse of oceans and wilderness that stretches far beyond the edges of any maps. There are barbarians living in the wilds, but they can be thought of more similar to Iron Age Gaels and Slavs than savages wearing furs and bones. 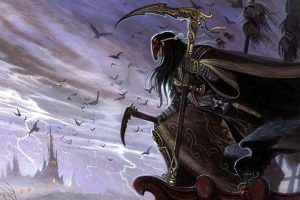 The geography consists of five great kingdoms, mostly located on the coasts of a large central gulf that opens into the ocean. The climate is generally temperate to sub-arctic, with stretches of sub-tropical and arctic lands on the very borders of the maps. It’s based somewhat on the Baltic Sea region, Northern China and Japan, and the American Pacific Northwest. As a native of the Baltic Sea, I can tell you that you can’t reach the highest degree of dreariness if it isn’t wet, foggy, and cold. There’s a reason that Scandinavian fiction is the way it is, and that Lovecraft and Steven King set their stories in their native Rhode Island and Maine.

When it comes to the darkness, I am leaning strongly towards the intrigue and decadence of Noir than savage wilderness. As the common people are concerned, their world isn’t really that bad. There is hardship and the occasional calamities, but overall it’s a life worth living and they are content. To find the darkness, you have to descend into the underworld of the occult and journey into the forbidden lands beyond the borders. It is no secret that monsters and arcane arts exist, but most people chose to stay away from this world whenever possible, and it is generally a wise choice. 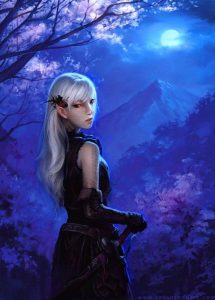 I’m a big fan of more exotic settings far removed from worlds based on medieval Central Europe. But for a Dark Fantasy world you can’t get too colorful and varied either. So I decided that the people inhabiting the setting are somewhat related races of semi-humans. Similar to the Melniboneans, the Red Men of Mars, or the Dunmer of Morrowind.

This is still very much unspecified, but I am leaning towards not giving any of them any significantly usual traits and abilities. It’s mostly an aesthetic choice.

The world is by nature a wild and savage place. There are many spirits that have great power over the environment and its creatures and they don’t apppreciate people making too much of their own mark on the land. Out in the wilderness, people are limited to living in small scattered clans that survive by hunting, fishing, and relying on some low intensity farming in forest clearings. They have to make regular offerings to the spirits of the land they live on and even then they are still frequently plagued by natural disasters and attacks from other clans. But such is the life in the wilds and the way things are meant to be. 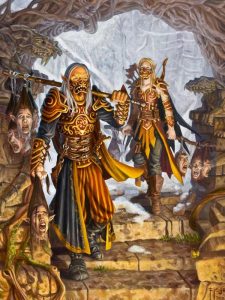 The five kingdoms are an aberration and they exist only because of the power of the god kings. The god kings draw great supernatural power from the natural energies of the lands they rule, which grants them a great degree of control over the weather and the elements and leaves the power of the spirits greatly reduced. Under the rule of the god kings, the people are enjoying an unprecedented degree of prosperity and security, being able towork the land, build great cities, and raise large armies to protect the realm from hostile neighbours or barbarian raiders. But this prosperity and security comes with a price. The people are forced to obey the orders of the god kings and their priests and governors, pay taxes in grain and serve in the armies and build their palaces.

For most people of the kingdoms, this is a price they would gladly pay many times over to be safe from angry spirits, earthquakes, floods, and famine. The god kings are rarely beloved by their people, but in their eyes the loss of a god king would plunge the realm literally into hell. To the barbarian clans such a life is unthinkable. They are used to make important decisions by consensus and elect their leaders and the thought of being slaves to a ruler who ursurps the power of the true gods of the land is abhorrent. 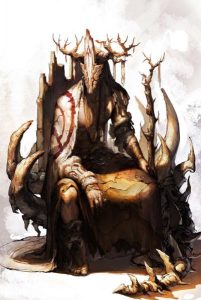 In the five kingdoms, the presence of the supernatural is greatly reduced and often obscured. The people are performing their rites to the god kings, say their prayers of protection, wear their charms and carve runes into their houses, and don’t go outside during ovrcast nights. And most of the time it works. There is little influence of the spirits felt in the villages and towns and those that do make their presence known generally don’t cause much real trouble. However, while the power of the god kings seems absolute, there is a dirty little secret that the priests would like the people not to think about. The god kings are not divine and their abilities are not unique. Magic is a skill that can be taught and learned and there are a large number of occult and esoteric societies, orders, and cults that practice their arts away from public sight and scrutiny of the priests. However, none of them possess powers that come even close to those of the god kings and how they managed to transcend the limitations of mortal sorcerers is one of the great mysteries. Despite of what the priests claim, god kings are also not immortal. There are ruins of previous civilizations below many of the great cities and palaces and scattered in the wilderness. Who they were and how they disappeared is another great secret presumedly known only to the god kings and their highest priests. 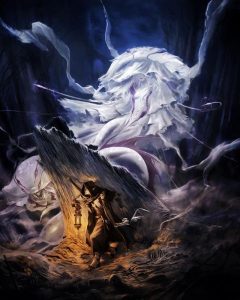 The power of the god kings over their realms is also not nearly as complete as the priests are teaching it. The strength of their influence varies from place to place and there are large numbers of holes in their realms where spirits still roam mostly unrestrained. These places are considered to be haunted by the common people and it is often forbidden by the priests to enter them under any circumstances. Occasionally something manages to slip out of these forbidden lands and the low ranking priests serving in these remote parts of the kingdom are often poorly prepared to handle them. And of course there is always the vast unclaimed wilderness beyond the border where neither god kings nor priests have any influence at all.

Sorcerery and witchcraft in the world is generally a rather low-magic affair. Most occult knowledge deals with potions, protective charms, and the means to harm and repell spirits. The binding of spirits is the greatest form of sorcery and gives a sorcerer access to powers far beyond mortal capabilities, including divination and shapeshifting. There is no throwing of fire and lightning, creation of matter, or teleportation though, or any similarly flashy forms of spells.

As with the people, the world is inhabited by many exotic fictional creatures, but for the most part they are simply ordinary animals. Monsters are always some kinds of spirits or undead and there is a very clear and unabigous distinction between what is an animal and a monster. 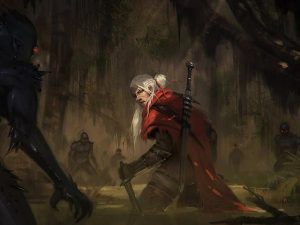 So what is going on?

Despite the powerful presence of the god kings and the paranoid fear of barbarian invasions, the setting is not actually about them. What it really is about are the various secret societies that exist within the kingdoms. While the common people don’t notice much going on, there’s actually a huge bustle going on out of sight. Everyone is hungering for every shred of occult knowledge like the writings of past and rival masters, the means to bind spirits, artifacts from overgrown ruins, the locations of sites of power, and of course any hints towards the secret of the god kings’ power. And as in the criminal underworld of Noir stories, most sorcerers will use any means neccessary to get their hands on these invaluable treasures before someone else. While in the background there are always the priest trying to maintain the priesthoods monopoly on supernatural power in the society. As priests are often incapable to deal with hostile spirits that break free of the god kings’ influence, it frequently falls to sorcerers, witches, and their disciples to take care of it.

The typical heroes of the setting are not usually reclusive scholars spending their days over scrolls and cauldrons. Most are warriors first and possess a collection of charms and potions to help them deal with spirits. Magic is of little use in a fight against mortal opponents and those are the ones that stand in the way to occult secrets and esoteric relics. With characters I am drawing heavily from the wuxia genre as well as the world of The Witcher. Think of heroes as kung-fu masters, taoist monks, witchers, or sorceresses.

Overall I am quite happy with the state of things so far. I still feel that it’s a bit bland, but that’s not too surprising at this stage where everything is pretty much placeholders and there exist no information about any specific kingdom, god king, or secret society. I am very much looking forward to how this will be working out as I keep going.

One thought on “Dawn of a Dark World”