I retroactively added this post to the WCotFP series.

Earlier this year many people have been writing about the cleric class being an oddity unique to Dungeons & Dragons that doesn’t really fit in most other fantasy settings and seems rather inappropriate. Priests in other fictional worlds never really look and behave like that, and especially in the early edition a great amount of spells are taken from biblical miracles. There seems to be some move to not use the cleric class and instead represent priests and shamans through alternate spell lists for the magic-user class. I am fully behind that.

That leaves you with the now very well established scheme of warrior, mage, and rogue, which you’ll find almost everywhere in fantasy gaming. And I have to say, I also don’t like rogues.

The thief class for D&D was a later addition that didn’t exist yet in the first release of the game but was added very soon after. And in hindsight this move made many people angry and was seen as a move in the wrong direction. But the effect that the introduction of the thief meant that fighters and mages no longer had any reason to try to deal with traps or scout ahead because now there was someone who was always much better at it then them is not my main problem with the archetype. The original thief class had a clear identity but soon people wanted the thief to be good at fighting as well which lead us to the current form of the rogue. And rogues don’t really know what they want to be. The thief aspect has largely vanished and instead we have a fast fighter with light armor, who does huge damage with special attacks, or could be an archer. That takes away almost everything the fighter had left except for heavy armor. In a campaign with knights that’s not necesaarily a problem, but when you play in a setting that doesn’t have heavy armor or huge weapons, what is left? This was one of the reasons that made me pick Lamentations of the Flame Princess as my current system of choice, as its specialist class is meant to be neither great at fighting, nor required to be a thief.

But still, I am not fully happy with that. For my Old World that is full of barbarian warriors and made for adventures mostly set in the wilderness, the specialist seems a bit too flimsy to represent a hardened adventurer and the fighter too simple to represent the more skilled and sneaky hunters. On Dragons Gonna Drag, Justin presented the idea of merging the fighter and specialist classes together. But I really like classes and am already down to only three of them, so my idea is to do something similar but opposite. 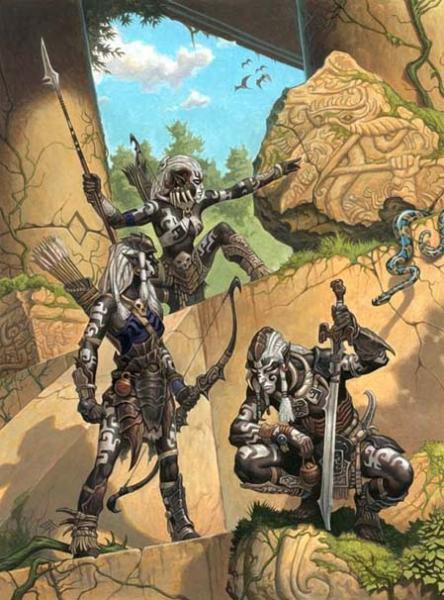 One of the greatest idea I’ve seen for the warrior, mage, rogue archetypes is in Star Wars Saga Edition which has the soldier, scout, scoundrel, and noble classes as a spectrum of different approaches to fighting character and skilled characters. Neither the scoundrel nor the noble are exactly thieves, and the scout is something different than just a fighter/thief. And so I decided to come up with some kind of scout class that represents a more sneaky kind of warrior than the fighter.

One idea I’e seen a while back is that the halfling class would make a pretty good base for a Basic ranger. And while looking around for some more ideas I discovered that this is pretty much exactly what Adventurer Conqueror King did with the explorer class. It’s pretty much the B/X halfling with a different name. That’s also what I ended up doing.

Creating a scout class for LotFP turned out to be pretty quick and painless. The basic frame is once again the halfling class with the addition of an attack bonus half that of the fighter (other classes im LotFP always remain at +1) and the saving throws taken from the dwarf class (which covers a wider range of levels) and reduced by 2. Since it’s a scout class, the Bushcraft skill of the halfling is retained, but it also gains the Stealth skill with a chance of 1 lower than Bushcraft and not the flat 5 in 6 chance in wilderness environments that halflings have. A scout also can make a sneak attack for double damage with no option to increase like a specialist does.

And there you pretty much have it. I am considering giving also a 2 in 6 chance for Search and Climb, as it would fit the theme, but right now I am somewhat uncertain whether that might be a bit too much. Compared to the fighter the higher saves should even out with the lower hit points, which leaves all the skills compensated only by the reduced bonus to attack. But overall I am very happy with the class and it really took only about an hour to make, including research.