The Desert of Souls by Howard Andrew Jones is the story of Asim, captain of the guard of a powerful nobleman in Bagdad in the 8th century. He is also the narrator of the tale, reporting of his adventure with the sage Dabir some indeterminate number of years later. I am usually not a fan of historic fiction or first person narration, but here it turned out to be surprisingly fun. When their master had been sad about the death of his favorite parrot, Asim took him to a trip to the market to distract him and cheer him up, with Dabir getting roped in against his will. On their trip they met a fortune teller who told them that an opportunity for great adventure was waiting for them right outside her door, but if they prefer to go back to their ordinary lives all they would have to do is stay inside her house a few minutes longer and it would simple pass by. But of course they didn’t. 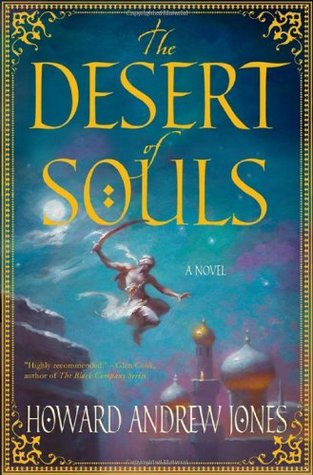 Even though set in a historic setting, the book is clearly a fantasy story. But even the two heroes are very sceptical that anything supernatural is going on for quite some time. And while miracles and supernatural beings are accepted facts of their culture, the ideas of sorcerers and undead monsters in the middle of Bagdad just seems too unbelievable to everyone. It’s a very “classic” adventure tale and I’ve seen Jones write frequently about his love for Robert Howard and Harold Lamb. And it shows. I think as historic settings go, this is as close to the spirit of Sword & Sorcery as it gets. I am also reminded of Indiana Jones and Tarzan, so you probably might get an impession of what kind of adventure this is.

Asim’s narration works very well for the book. Overall I think the characters are not very complex, but both Asim and Dabir have clear personalties and it shows through not only in their dialogues but especially in the way that Asim describes the events and adds his own thoughts on them. He is somewhat of a simple man and while apparently being able to do a good job at protecting the house of his master and his family, all the praise for him is generally about his loyalty, honesty, and bravery. But he really isn’t the sharpest knive in the drawer at any stretch. The language he uses to tell his tale is simple and he often glosses over the details of the more arcane and ocult things that are going on, admitting that he didn’t really understand what the sages and sorcerers had been talking about. At the same time you also learn a lot about him from the little and seemingly irrelevant details he does mention because they seem to be important to him. It’s frequently mentioned in passing that they took a short break for prayer or that they washed hands before sitting down to eat, and while you almost never see him mentioning the turbans people are wearing, there are numerous cases where he points out that a person did not wear a turban. I don’t know the cultural dress code of that place and period, but simply by mentioning it it becomes obvious that Asim considers them improperly dressed and that to him that tells quite a bit about their character. While somewhat simple minded and a warrior, his honesty and integrity are without doubt and he is very conscious of his manners and proper behavior. Or at least as he sees it.

I sprang off my left foot, caught the roof ledge with my fingers, and pulled myself up. Dabir urged care; I do not think he heard my response, as I was too busy not falling to answer clearly, and my words do not bear repeating.

As far as knowledge of history and culture goes, the Arab world is not one I am particularly familiar with, but throughout the book it is always very apparent that Jones does. At least once or twice every chapter there is something mentioned that makes me stop and think “Oh yes, I think I heard about that somewhere before. Interesting to see it included in this story.” I mentioned the regular breaks for prayer and the washing of hands, as well as the absence or loss of turbans, but there’s always a lot more of this kind everywhere. At one point early in the book there is a mention of Turks, and that seemed somewhat dubious to me so that I looked it up. And as it turns out, the Turks had already been muslims in the 8th century, even though it was only many centuries later that they migrated from modern Kazhakstan to Turkey. And not only are there muslims in Bagdad, but also Zoroastrians and as they travel down the Tigris there are scenes involving “Marsh Arabs”, an ancient ethnic minority probably very few people in the western world have ever heard of. All this makes it feel that this story takes place in the real Abbasid Caliphate and not just some Arab-themed fantasy world that has some well known place names thrown in. What always intrigued me most was the use of the term “Greek”. In the tale as told by Asim, it’s always simply “the Greeks” without any additional commentary, and given the way he narrates the story it feels very appropriate. Asim knows what he means by Greeks and assumes that all his listeners do as well. But at this time in history, any “Greek” ambassadors or spies would be from Byzantium, the capital of the Eastern Roman Empire. And most of eastern and northern Europe was not christian yet, so to Arabs in the 700s the word Greek might even be seen as synonymous with Christian. I really liked that the Greek sorcerer in the story is a necromancer. Resurrection of the dead is a purely Christian concept and the whole idea of Hell was adopted from ancient Greek mythology. I don’t know of Jones took any liberties there, but I wouldn’t be surprised if there were rumors circulating in the muslim world about Christians creating undead monsters in secret. The Romans had rumors about Christians being canibals and practicing child sacrifice some centuries earlier, so it doesn’t seem unlikely. And after all, even the word necromancy is Greek. In contrast to that, the Zoroastrian priests use fire magic, which also seems like something that the people of Bagdad probably would not have found too difficult to believe.

Jones has written quite a bit about the Sword & Sorcery genre over the years, among them some of the most interesting and insightful articles I’ve seen about it. He really does know the genre and how it works, and this shows very much in this book. It’s really a lot of fun. There’s almost always something happening and the narrator is always giving his own thoughts and perspective on the events in a way that is very enjoyable. (The first boat ride was the only point where I thought it should hurry up and get back to the action.) There are frequent fight scenes, but they are generally kept brief enough to not bog down and keep the action moving. Things tend to happen in interesting locations and there are lots of turns that give the whole thing a certain pulpy quality. Calling the book formulaic would be doing it a great disservice and create the wrong impression. It’s not a heap of cliches in any way and feels very original. But I think overall it could have much more of a spark and been much more audacious. Jones manages to avoid the story getting campy or pretentious, which is always a real risk with this genre, but I think it could have used a good amout of more fire. Structurally I think it’s an excelent adventure tale, but I got the impression of it being a bit too careful and slightly stiff. Aside from Asim, who being the narrator is always present throughout the entire tale, the supporting characters all seem somewhat underused. From what glimpses we get of them, Sabirah, Hamil, Farouz and even Diomedes seem like really interesting characters, but they actually do and say only very little throughout the entire story. Ali could have been a villain you would love to hate simply based on all the times he showed up to ruin someone’s day, but sadly we don’t really ever learn anything about him. He’s just the knife guy.

But even considering that, I think this book is really pretty great. It doesn’t read like a book by a seasoned career author, which it isn’t, but it’s one of the books I had the most fun reading in quite some time. That’s really one of the things I’ve been missing from many books I’ve recently been reading. As well written as many of them are, they are not fun. There’s a second book with Asim and Dabir, which I am sure I’ll be reading eventually. And if Jones adds a bit more fire and audacity to his tales, I think he could be really outstandingly good.