This one almost completely slipped past me. Fantasy Age has been released yesterday. 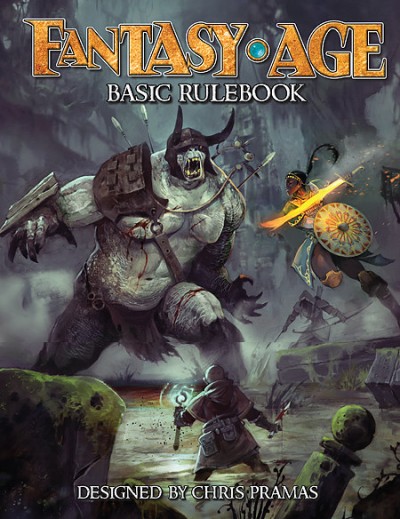 I got the pdf, which at 15€ for a new game is okay, I guess. It’s only 145 pages long, but I really rather have a compact game than getting needless clutter to make the purchase “worth the money”. I can live with that.

And after a first reading, I really quite like it. It is a very basic and generic system, and that’s what you’re paying for here. A system. There are three classes (warrior, rogue, mage), six races (human, dwarf, elf, gnome, halfling, orc), 12 specializations (4 for each class), 12 magic talents (of 4 spells each), and only 14 monsters. You could play it out of the box, but that’s quite clearly not what this book was written for. This is meant for GMs (and I am so happy that they call it GM and not Timelord or something like that) to take and customize according to the setting of your campaign. Which seems really quite easy, but so far I have not actually spotted a section that would guide new green GMs through the process.

It’s more like GURPS than Pathfinder. If GURPS where a simple and lightweight system. Maybe it’s actually more like Barbarians of Lemuria. While characters have classes and levels, they are really primarily defined by their nine ability scores. A mage with a high Dexterity score and the Focus for Stealth is just as good as a rogue at being sneaky. A rogue with a high Accurace score and the Focus for Light Blades can has just as good a chance to hit as a warrior. And the character level doesn’t really affect that. The level does not determine how high your abilities are, but how many you have. Health and Magic Points are really the only numbers that get bigger at higher levels.

I’ll probably write a full review on this game in a week or two, but so far I already recommend it for anyone interested in a lightweight generic and customizable fantasy system.