When Indiana Jones and the Kingdom of the Crystal Skull came out in 2007 the oppinions I hear about it were mostly pretty bad and calling it by far the worst Indiana Jones movie and absolutely terrible, and it causing the series to be ruined forever!. So I never watched it in all the years and had no desire to ever do so. But I got the series on DVD for christmas and it had the movie included and yesterday my parents were visiting, and since we wanted to watch a movie and none of us had seen it before, we watched it. Otherwise I still wouldn’t have watched it, preferring to simply don’t know what’s in it. (I might do the same with the new Star Wars movies.) 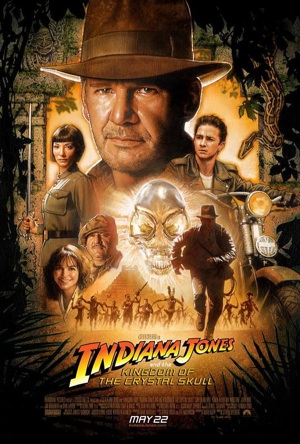 Right from the start some things seem to be odd. Indy aknowledges being old and mentions his father having died, which doesn’t match the ending of the previous movie. But no explanation is ever given or the events of the movie mentioned, which I found rather odd. The second scene is set in the famous warehouse from the first movie and we get a quick lool at the arc as its box is broken, but otherwise the first movie isn’t mentioned either. It’s just like “look, we made a reference to the other movies!” That’s weak. Indy starts the movie with a new sidekick, whose name I can’t even remember, which always is a very bad sign about the strength of a movies characters and dialogues. It’s never explained who he is or what his relationship with Indy is, and except for two short scenes he has no real relevance to the plot or any meaningful dialogue. The other new character is Mutt, who follows Indy around after fat moustache guy has left for a while and after his first scene has no real impact on the plot either. Later of course we meet Marion again, who is a fun character but also has just one relevant dialogue with Indy and doesn’t really contribute anything to the plot. John Hurt also plays a character who gets picked up with by Indys crew and hangs around for the rest of the plot, but after drawing a map in his first scene does not have any meaningful dialogue or impact to the plot. Indy himself is okay, but you probably can see the problem here. Indy could have gone on this whole adventure by all by himself, or at least with only one companion to give an opportunity to explain the plot to the audience.

There are two villains in this movie. One is a Russian psychic played by Kate Blanchet, who tries to read Indys mind once but fails and then never shows any supernatural abilities for the rest of the movie at all. She keeps chasing after Indy for all of the movie but except for one scene in the middle of the movie she never catches up to him so her impact on the plot is also almost nothing. She has a henchman who commands a group of Soviet soldiers, but since he almost only speaks in Russian without subtitles and very little of that, we don’t really know anything about him. *sigh* And yes, he also does not do anything relevant for the plot. Indy has a fist fight with him, but he simply falls over ans gets pulled into a hole by a swarm of ants. It doesn’t remotely reach the fight against the random German mechanic in the first movie, which is clearly what this scene tries to allude to. At two point during the search for a lost ancient city in South America does Indy run into local tribes of Indians who menacingly sneak around with seemingly supernatura skill in the dark. But they show the Indians the skull and they back off, doing nothing at all and then disappearing while Indy explores the city.

And that really expresses the big problem of the movie. People move to different places and have chase scenes, but nothing ever happens. Nothing is accomplished, nothing is gained. In most of the chase scenes there isn’t even a reason why they are getting chased. They just move fast in vehicles. Occasionaly the classic red line on a map shows us where they are traveling to, but it happens randomly without anyone saying “we have to go to X to do Y”. It’s like the ending of a Monty Python sketch. When they don’t know how to continue or end a scene after they have said what they want to say, you get a shot of the map and then go to “something completely different”. Probably the most infamous scene in the movie is where Indy gets into a nuclear explosion and only survives by hiding inside a big refridgerator. Yes, the scene is stupid, but not because he survives being thrown miles through the air and crashing very hard into the ground. In fact the scene happens about 5 minutes into the movie when Indy escapes from the Soviets who had kidnapped him to have him help them find a specific box in the warehouse where the CIA stores all its secret artifacts. Which happens to be a simple airplane hangar inside the testing area for nuclear bombs. The Soviets probably chose to go to the site on that day at that time because the whole area had been evacuated. That makes sense so far, but wouldn’t that mean the warehouse is now destroyed with most of its contents? That doesn’t make any sense? Why is it just a hangar on a military base and why do they have nuclear tests there?! And worst of all, It has no relevance to the plot! At all! Indy already escaped from the Soviets and was just somewhere in the desert after they had left with the thing they had come to get. There was no point to the scene at all! Maybe to put it into the trailers? Bullshit.

Though I give it to the movie that it is eight years old, I have to say the effects look pretty bad. There are big swarms of goophers in the first scene and monkeys in a schene in the jungle (which have no relevance to the plot), which are obviously only there to show of the effects. And look terrible. The nuclear explosion looks fake too, as do most efects.

It’s also extremely predictable. We usually never do riff-tracking for movies and we didn’t intend to be fooling around, but in the big scene at the end, when they reach a room with alien skeletons, our comments were this:

Which was of course exactly what happened.

The ending was also bullshit. Supposedly the reward for the person who returns the skull would be gold, but in Mayan the word for gold also means treasure. And the treasure they found wasn’t riches, but knowledge. What a nice message. But what knowledge? What have we learned at the end? Nothing! The whole trip accomplished nothing! There was some excuse for first finding a missing friend in trouble and then about preventing the villain from getting the power to telepathically turn all Americans into loyal socialists. But in the end Indy and his large entourage don’t really do anyhthing and the villain fails anyway. In fact, the villain only gets this far because Indy leads her there. And why does he even keep trying to get the skull to the lost city once they stole it from the Soviets? Even the other characters are wondering. So Indy tells them that the skull told him so and he has to. And they just go with it.

Is it a bad movie? Yes, it is. But not for the reasons people always complain about. The reason this movie is bad is that things are happening with no rhyme or reason but it’s still painfully predictable. There is no plot worth mentioning and nobody ever does anything. This movie only exist because it had been decided that there should be another Indiana Jones movie. But nobody seems to have had any real inspiration for a story. There are characters and locations, but nothing is ever done with them. The are introduced and then immediately forgotten about. At several points of the movie I had the feeling that the script originally started as a decent story but then was shortened and shortened to make for a shorter film and leave more time for special effects until nothing of the plot remains.

But ruined forever? Yes, the movie is bad. But it is simply very weak. It is not insultingly bad to fans of the series. It really mostly ignores the other movies and it doesn’t do anything really ridiculous except for the refrigerator. And extradimensional aliens? Sure, why not? It’s not a cheap twist at the end as I had assumed, but made clear right from the start that this is what the movie is about. It’s not a good choice, but it didn’t seem to me as particularly unfitting for the series.

But when it comes to asking yay or nay, I think I would like to introduce a third rating: “Meh”. Because that’s really what I feel about this movie. It really isn’t great by any stretch, but it is so utterly bland and without plot that I’m not even mad. 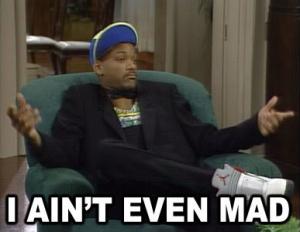