Black Streams is a series of free, short supplements for the Red Tide campaign sertting by Kevin Crawford. Though they are directly tied to the setting, they are self contained enough to be eassily adapted for any setting in any OSR game and should also be useful sources of ideas for other systems. 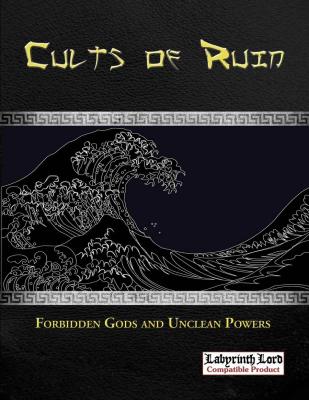 Cults of Ruin expands on the cults of various evil forces that are mentioned in Red Tide and has a length of 7 pages. The Black Emperor was a powerful and evil ruler back in the days before the Tide, who was eventually destroyed for his dark sorcery, but somehow managed to ascend to becoming a god. Though most records of his terrible reign and evil transgressions had been deliberately destroyed or lost during the coming of the Red Tide, the truth can still sometimes be discovered by sages searching for obscure lore. Only scholars, alchemists, and other learned people can become true followers of the Black Emperor, who offers them secrets to extend their life and evade Hell and other necromantic magic. The God-Beasts are savage animal spirits that protect remote villages and can grant fertility to their fields and herds, but often demand terrible forms of tribute from their worshippers. The only salvation offered by the Hell Kings is the promise that those people who truly devote themselves to evil can gain their respect and admiration, so that when they ultimately will go to Hell after their death, they will be elevated to rank among the Hell Kings instead of suffering in eternal agony. Worshippers of the Hell Kings are expected to lead as many souls as possible into hell, but even among the high priests of the cults only very few reach a degree of evil that gets them a place among the lowest ranks of devils. The Red Gods are strange entities of evil and hunger that only reveal themselves to people suffering from famine and facing starvation. They grant the gift of great strength and vigor, but in turn those who accept it slowly transform into ravenous beasts who gain sustenance from a range of unnatural and depraved sources. Finally there are the truly mad cults that worship the Red Tide itself. They are compelled to create portals that allow the Tide to spill into the Sunset Isles and are usually the first to be torn apart by the horde of the Tides spawn that emerges. The last page describes the new Azure Minister class, a cleric variant specialized in secretly exterminating evil cults that threaten the Sunset Isles while keeping the existance and true nature of their organization secret.

The Pacts of the Wise seems to be heavily inspired by pact magic from the Tome of Magic of Dungeons & Dragons. It’s 7 pages long and describes six elusive entities that can be contacted by a wizard to be granted special powers. The ritual to make a pact take a month of preparation and have to be repeated once every year. Unless a ritual to be released from the pact is performed, wizards who fail to meet their obligations are suffering severe consequences until their debts are paid. The powers granted by the entities are not particularly powerful and more than balanced by the price demanded from the wizard, but still interesting and useful enough that players might consider it to be worth it. It certainly adds an interesting new element to the character and each pact includes ideas on how to create adventures around NPCs who have access to these powers or are struggling with meeting their part of the bargain and are getting desperate to gain the required resources. Even though there are only six entities described, they provide a sufficient base to create your own ones. Since the mechanics involved are extremely simply they are easily adapted to any game.

The Yellow Legion is 8 pages long and describes a powerful artifact and the Walking Ghosts it can create, as well as their history in the Red Tide setting. The artifact is a black rod that can be planted into the ground to grow into a large tree that produces magic fruit when watered with the blood of living people. The juice of the fruit have the power to restore any corpse and return it to unlife, and the blood of a single person creates enough fruit to create ten walking ghosts. However, the fruit can only revive creatures of the same type of creature whose blood is used to create them, so to bring a fallen army of human soldiers back to life, many humans have to be sacrificed to the trees. While those who have been sacrificed can be raised like any other corpse, they are henceforth forced to exist as undead. The walking ghost are loyal to the person who create the tree and appear just as they were in life. They do not eat, drink, breath, or sleep and they heal and can be healed like living humans, but even the terrible and horrific wounds can not kill them. Only when hacked to pieces or burned do their minds fall into delirious slumber, but over the course of many years their bodies can restore themselves and make the walking ghosta rise from their graves. Without purpose after the eventual death of their creator they wander the land with the appearance of a living person, but all living things can sense their unnatural aura. If there is a way to permanently end them, it has not been discovered.

Though short as they are, I really like all these supplements and in fact their briefness probably makes them even more interesting and useful for GMs not using the Red Tide setting. Pacts of the Wise is probably the most versatile and not at all connected to any specific settin, and I recommend it to everyone to give it a look. The other two have a much more specific cultural flavor, but since they are both short and completely free, I do recommend them all. Really nice stuff and a format I would like to see used by more games in addition to full sized books.