Spears of the Dawn is another small sandbox setting by Kevin Crawford, who also did the excelent Red Tide setting. While Red Tide uses a great number of elements from Chinese and Japanese culture, Spears of the Dawn is strongly based on various cultures of West Aftica. The book consists of roughly three parts: A complete roleplaying game, the Spears of the Dawn campaign setting, and advice on running sandbox games. These are not clearly divided into three section though, and it’s probably best to read the whole thing even if one only intends to use certain elements of it. It’s made clear in the introduction that this book is meant to be mined for ideas and its elements disassembled and repurposed as any GM sees fit. Like Red Tide, it is more of an example of how a great sandbox setting can look like and how you make one. 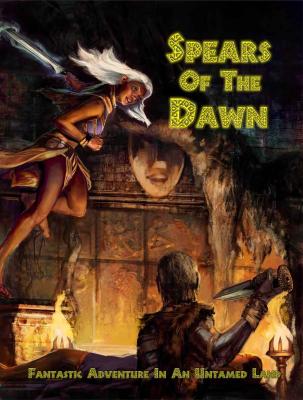 The setting presented in Spears of the Dawn are the Three Lands. Two centuries ago the empire of the Nyala was close to conquering all of the other five kingdoms of the Three Lands and when the king of Deshur was forced to retreat with his remaining army into the desert he discovered the means to make himself and his followers into Eternals. The Eternals are powerful undead who neither age, nor need to eat or drink, but maintain their youth and heal any wounds through the eating of human flesh. For over a hundred years the Eternal invaded the lands of the Five Kingdoms and causing the empire to fall apart. Eventually the emperor of Nyala accepted that the other four kingdoms were no longer under his control and instead created an alliance of equals to destroy the Eternals and put an end to the terror of the Sixth Kingdom. The Five Kingdoms where victorious and the Sixth Kingdom no more, but they were unable to destroy all of the Eternals as some of them escaped into the wilderness and continue to exist in hiding to this day. In the fourty years that have passed since then, the fate of the new Five Kingdoms has remained uncertain. There is peace now, but the former subjects of the Nyala still have resentments against their former masters and there are still many bands of raiders and new settlements created by refugees from the war are not always getting along well with their neighbours. The last emperor had anticipated that some of the Eternals might escape from the armies of the Five Kingdoms and created a group of warriors, shamans, and sorcerers called the Spears of the Dawn, who were given the duty to hunt down the remaining Eternals and destroy any lingering trace of their evil. With the empire being no more and Nyala being only one kingdom among others, the Spears of the Dawn lack any real leadership or organization. However, with the threat of the Eternal and other evils still around, there are always more people who take up arms and wander the Five Kingdoms to destroy them. With many elders still remembering the terror of the Eternals well, these warriors against evil are highly respected and stand somewhat outside of the normal tribal politics and regular social classes.

It’s a nice compact setting, though I am feeling a bit ambivalent about the post-colonial character of the Five Kingdoms. I would consider my knowledge of African politics and social issues only slightly above average and tribal affiliations and great class inqualities appear to be indeed an important factor in regional and social conflicts. However, to a large degree these conflicts are the result of the British and French colonial empires and their sudden disappearance that left many regions in administrative chaos. Using contemporary Real-World conflicts as a template for a fictional medieval African-inspired setting seems a bit problematic to me. It’s not exactly a respectful treatment of a cultural region and its people to focus on one of their darkest periods which was primarily caused by outside forces. However, Spears of the Dawn doesn’t reduce the African theme of the setting to only that element and there is a lot more than that. And it isn’t like precolonial Africa was all happy paradise. There has always been as much tribal war and violence, as well as slavery and exploitation of lower social classes in Africa as in all the other continents of the world. When empires fell apart in Europe, the result was always just as ugly. So I am inclined to give this setting a pass in this regard. While I probably would have stayed clear of that aspect myself, the way it is treated here seems pretty well balanced and I think you have to actually know what to look for to notice any real world similarities at all.

The game rules are an adaptation of Stars Without Numbers, but it’s really a pretty standard OSR game inside. Character classes, the combat system, equipment, magic, and monsters will all be instantly familiar to anyone who has played any edition of Dungeons & Dragons, but it seems to have the most similarities to B/X and many of its clones.

Characters in Spears of the Dawn are all human and the game has four different character classes. In addition to the warrior, there are also the marabout and the nganga, which are mostly pretty normal clerics and wizards with a few unique tweaks but their own distinctive spells. The most unique and interesting class is the griot, which can be thought of as a kind of bard, but works quite differently than in most other games. The griots are primarily lorekeepers who are educated in the history, songs, laws, and traditions of the Five Kingdoms. They are decent fighters like the marabouts, but their special powers don’t lie in communicating with spirits or casting spells, but in being great orators and masters of law and customs. At each character level a griot learns a new song, which have great power over the people they are adressed to. In simple words, griots always know exactly what to say and how to say it best. They can grant great strength and courage to warriors by telling them about their great duties and the deeds of their ancestors. They can drive away fear and evil magic that clouds the mind and gain the support of others. Their words are so powerful and complelling that they can drain the strength of evildoers by confronting them with their transgressions and the shame they bring to their families and ancestors and the most powerful songs can make them openly confess their crimes before everyone around. In a purely combat focused game or dungeon crawl, the powers of a griot are mostly not particularly useful, other than giving slight bumps in strength to their allies. But in a campaign heavy on social encounters and tribal politics, I can see them as very powerful characters that are probably really fun to play and great additions to the party. If anything, a griot character might quite likely steal the show in any public gathering or court audience. These characters are experts in working the crowd and exposing transgressions against the laws or traditions, and in a setting like this one these are not simply matters of custom or politeness, but of great importance and can make or break even a king.

Marabouts mostly work like clerics, but they don’t prepare their spells. They can cast any spell they know if they still have sufficient spell slots left for the day, but their number of spells is very limited. A marabout stats with two spheres, which each provide one spell of 1st through 5th level. As the marabout becomes more powerful, he gets access to the higher level spells of his spheres and also gains access to additional spheres with a maximum of five out of nine available spheres. Ngangas have two types of spells, rituals and nikisi. Rituals can be performed at any time, but often take several hours to complete and can be very expensive. Nikisi are more like regular spells but unlike wizards, nganga store them not in their mind but in small items. All the little talisman and trinkets a nganga carries with him are actually his spells.

There is also a small but quite well done collection of monsters, which I almost all find quite interesting and different from common fare.

While Red Tide is also a sandbox toolset, the way it explained preparation and the running of such a game was mostly focused on a pretty straightforward exploration campaign like hexcrawls and dungeon crawls. Spears of the Dawn instead has a much greater focus on creating and running social sandboxes. In a way, it also takes a few steps back and goes into some more detail into the basics of playing open-ended campaigns and how to run a game that is mostly driven by the players descision to direct the progress of the story. This part makes up almost half of this 180 pages book. This part makes up almost half of this 180 pages book. In addition to quite extensive amounts of advice on setting up open-ended stories, motivating the players, and handling NPCs, there are also several tables with lots of great ideas to quickly create interesting details for locations, groups, and conflicts. Instead of just having “a cave”, you can roll a few dice to get a cave that is too low to stand upright in most places, which is inhabited by the followers of a crazy prophet, and also has pools of magical water. That’s already a lot more interesting.

Red Tide is about building a sandbox setting, Spears of the Dawn about running a sandbox game. To anyone really interested in running open ended campaigns, I actually recommend getting both, as they actually complement each other quite well.

Overall I think this is a really good book and given it’s cheap price something I recommend anyone to give a look.