When I started collecting lists of all the stuff from other great fantasy settings which I would like to include in my Ancient Lands world, I also made a short list of cool criminal organizations. There are some pretty cool and interesting ones out there, like the Shadow Thieves and Zhentarim, the Dark Brotherhood, Black Sun and Czerka Corporation, the Shadow Broker, and a whole lot of others. But a very important part of good worldbuilding is to keep the whole setting coherent in its premise. And now that I started to really give some thought on the criminal organizations I had floating around as broad outlines, I noticed that most of them really don’t fit this kind of setting.

The Ancient Lands are a world that is primarily wilderness, inhabited by tribal people in small villages with only a few larger cities, which are still relatively small compared to those of other fantasy worlds. Having a Gnome Mafia in such a setting doesn’t really make much sense in such a setting once you start looking a bit closer. Each clan has its own small territory and is effectively controlled by a single extended family that rules without any interference from outside forces. There usually is not even a king and certainly not any state that tells them what they can and can’t do. As long as the minor families don’t revolt, the clan leaders can do whatever they want. At the same time the clans are small enough that the leaders are personally aware of anyone who is stirring up trouble and when someone commits crimes against other people of the clan, the chief can simple have them exiled or executed and that’s the end of it. The chiefs personal croonies might be abusive bullies, but that only makes the chief a tyrant who still is officially in charge.

Which leaves the cities and major towns, but those aren’t actually that big either and there isn’t a lot of them as well. In a city of ten two twenty thousands, you can’t really be building a criminal empire without becoming one of the rulers of the city and spreading out over multiple cities is also not particularly practical. There is also the question of what criminal organizations would do. In a Sword & Sorcery setting the only purpose to smuggle anything would be to avoid taxes, but usually nobody cares what weapons, poisons, and drugs you are selling. And tax evasion isn’t really a terribly villainous crime.

But there are still plenty of people who make money with violence while not being part of the official governments.

In most cities of the Ancient Lands, nobody cares which kind of dangerous goods you can buy at the market or in shops. However, there are some people who care a lot about who may sell which goods or not. If any kind of goods is sufficiently rare, some merchants always try to get a monopoly on them. Be it certain rare drugs, spices, poisons, gems, or other precious materials, usually there’s a small number of rich merchants who control virtually the entire trade with them and they go to very great length to protect their monopolies. These merchants are only losely organized but include those who produce, transport, and sell the goods. Anyone small stores in the cities and towns who are found to sell those goods without getting them from the big merchants who claims the local monopoly on them will quickly be visited by some of his croonies who will make sure it’s not going to happen again.

Smuggling illegal goods by the city guards isn’t really a thing in the Ancient Lands, but secretly circumventing the cartel monopolies can bring just as great profits. However, the price for getting caught is usually much higher as well. 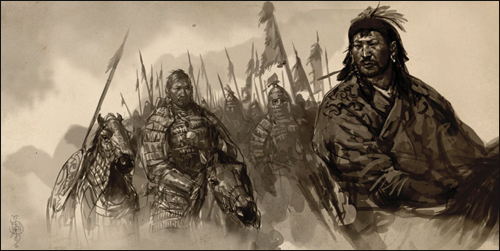 In a tribal society outlaws are not simply people who break the law, but those who have been exiled for whatever reason and cast out whithout the protection of any clan or city. In a world with no courts and no police outside the cities (and even there they are mostly confined to the richest neighbourhoods), the only thing that protects you is the certainty that someone will avenge any crime commited against you. Without a clan to back you up, you’re fate depends entirely on your skill with your weapon. At the same time, nobody can be held responsible for your actions if you commit any crime or cause any damage and you don’t have to worry that anyone else is going to suffer for your offenses. So even people who don’t want to rob or murder you still won’t trust you because there isn’t any reassurance that you will behave. There are really only two possible lives for outlaws, which are becoming a hermit in a place where nobody will find you, or becoming a bandit.

Occasionally warriors down on their luck will try to ambush travelers on the road for a bit of money and food, but outlaw bandits are a whole different class of criminals. These men and women often band together for mutual protection against anyone who might want to rob or enslave them and while many of them have been exiled for some crime commited against their clans, an equally large number were born into these gangs. Even if they have not commited any crimes themselves, nobody believe that these outlaw children could be trusted to be honest and behave either. With almost no other clans or merchants willing to trade with them, bands of outlaws often survive by robbing travelers and caravans on the few roads that cross the vast stretches of uninhabited wilderness of the Ancient Lands. Most of them have their own hidden villages somewhere in the wild, where they keep their loot and their families and slave grow some meager crops and keep a few goats and pigs. Not all outlaw bands are necessarily evil or murderous, but they all know that everyone fears and mistrusts them and don’t take kindly to most strangers. Other outlaws might find a home among them, but all bandits know that they can’t trust anyone, especially each other. 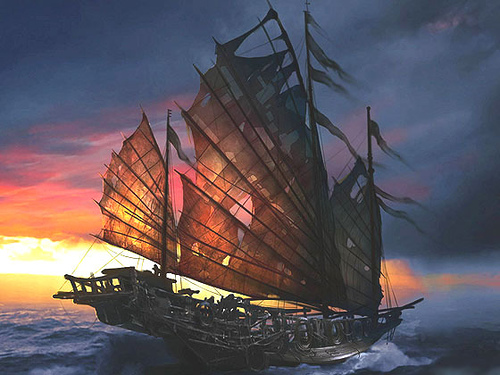 Pirates are very similar to the outlaw highwaymen that ambush caravans on the roads, but their territory is the sea and the major rivers of the Ancient Lands. Not all pirates are outlaws and many crews are simply warriors of poor clans that are unable to support themselves with whatever resources their homes offer. Coastal and river pirates often make their own small boats which they use to board merchant ships, while sea pirates mostly use ships they have captured from Keyren, Takari, and Mayaka traders. River and coastal pirates defend their territory against competitors as fiercely as highwaymen, but the sea pirates often roam very large stretches of sea for many months and generally avoid fighting with each other. There are several known pirate ports in the islands of Suvanea in the Inner Sea and the outlying islands of Halond to the north, where pirate ships make stops to make repairs, take supplies, and also trade the treasures they captured.

Both highwaymen and pirates keep a good part of their spoils to bring back home and share with their families, but usually a large amount of the booty consists of things that have relatively little practical value to them. Since they can’t really visit the great markets in the cities and towns without raising questions, they need the help of merchants who don’t have any reservations about trading with thieves and murderers. As the pirates and bandits don’t have a lot of choice where to sell their loot, these goods are often traded well below their actual value, resulting in a huge profit for the merchants. Very often these fences are the same merchants who also control the monopolies on certain goods.

In the cities and larger towns there are also always some minor criminals who make a living by stealing and robbing people in the streets at night. There is rarely more than a few dozen of them in any place except for the very largest of cities, but often they band together in groups of just a small handful of thieves who each carve out their own territories and drive out any other thieves that might try to compete with them. Too many thieves in any area only make the guards patrol more frequently and keeps rich people off the streets at night, so that’s bad for business. Larger gangs might be able to extort some money from small merchants in the poorer parts of town and in some cities where the guard has no real presence outside the rich neighborhoods they effectively rule the streets themselves. When they get powerful enough it often gets more profitable for them to stop robbing people at night entirely and instead collect a fee from the residents for their service of keeping the streets clear of other gangs or drunk sailors. Such neighborhoods are often actually safer than those which are patrolled by the guards, but only as long as one is paying the local gangs their share. There are rarely more than two or three such large gangs in any major cities, and usually only one in smaller towns. Two gangs in the same town usually don’t last very long.