Couldn’t help myself with the title.

Starting a wilderness and stronghold building campaign setting with supernatural cosmic beings is a bit backwards, but that was one of the first things that popped into my mind and it kept running with it until it quickly turned into something that I think is really solid and might even be final already.

The big inspirations I am drawing from are the ALMSIVI Tribunal and daedra from Morrowind and sorcerer kings from Dark Sun, the Deathless of Aernal and the Inspired of Sarlona from Eberron. Also the demons and soul arts from Demon’s Souls and the Pagans from Thief. Several works that have been mentioned here before plenty of times, but ideas from Demon’s Souls and Eberron in particular are taking things in a quite different direction.

A Concept of Spirit

Both mortal beings and demons are understood to have three different components that make up their existence. A body, a life force, and a mind. As an analogy, the body is like a lamp, the life force is like oil, and the mind is like a flame. Any kind of self is in the flame of the mind. If the body runs out of life force, the flame is extinguished and the individual ceases to exist. However, the life energy of a living creature can be stolen and consumed, either in part or completely.

In the analogy of the lamp, ghosts can be regarded as a kind of smoke. There is a direct link to the flame and the nature of the flame affects the appearance of the smoke that lingers, but the original mind already has gone from existence. Ghosts are kke echos instead of a voice.

The natural environment that surrounds mortals and in which they live is both a manifestation and the origin of a universal, supreme divine force. The Divine is in everything and off everything that makes up the natural world and the creatures in it. While the Divine is far beyond mortal understanding and perception, it manifests itself in various aspects known as the gods. These gods are understood to be separate from each other, but also parts of a greater whole that even they can not comprehend in their own limited experience. Mortal cults highly anthropomorphize the gods, appearing humanoid in iconography and behaving like people in myths, to contrast them from the alien strangeness of demons. But ultimately the gods are more like formless forces acting within the ultimate Divine. Individual gods don’t hold domain over specific aspects of the natural world or mortal life, but each of them is believed to have a greater control over certain aspects than others. There is no single god of storms, but there are many gods that are worshiped because of they are believed to have the power to protect people from storms. As a result there is no standardized pantheon shared across all cultures, and the religions practiced in no two temples are exactly the same. 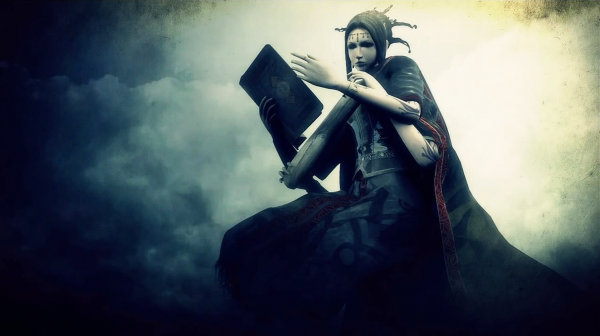 Everything that comes from or exists outside of the natural environment and the powers of the gods is regarded as demons or demonic. Unlike the gods, all demons are physical beings, bound to a single body they can not be separated from, though often not tied to a single specific shape. As a general thing, larger and more alien demons tend to have greater supernatural powers, but their looks can be deceiving. More powerfhk demons have the ability to communicate with their minds across vast distances and even control the minds of lesser beings. But since their minds are a creation of the life force bound within their physical bodies, true demonic possession is impossible. The closest thing to that is sorcerers consuming too much life energy from demons and adding it to their own until they effectively become indistinguishable from demons themselves. But their minds are still the original flame, only know burning a different kind of fuel.

The category of demons includes many kinds of beings that would considered as spirits or fey in other contexts, but they also include incomprehensible, reality-warping leviathans from realms never seen by mortal eyes.

In a number of city states, the traditional worship of the gods has fallen back in importance behind the cults of living god-kings. These powerful monarchs claim that they are physical incrnations or avatars of gods and that they possess great divine powers to repell invading armies and force demons to their will. Though in practice the abilities they display are little difference from those of extremely powerful ancient sorcerers. 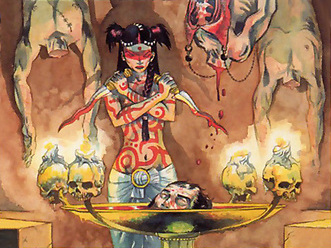 Priests perform great rituals and sacrifices to request aid from the gods for protection and prosperity, to which the gods will respond through action in whatever way consider appropriate. The priests themselves possess no magical powers.

Typically, demons are seen as very dangerous, hostile to mortals, and never to be trusted. However, the druidic cults of many barbarian tribes see things as much more complex, with some demons being useful protectors and teachers of magic, and even caring for the people who honor and serve them in their own strange ways. But even druids agree that all demons are extremely dangerous to deal with.

Most sorcerers keep their magical powers secret and instead appear in public as nobles, merchants, alchemists, or scholars. Only the most powerful of them make no efforts to appear as regular people, as they have little to fear from regular people or worry about being bothered by local lords.