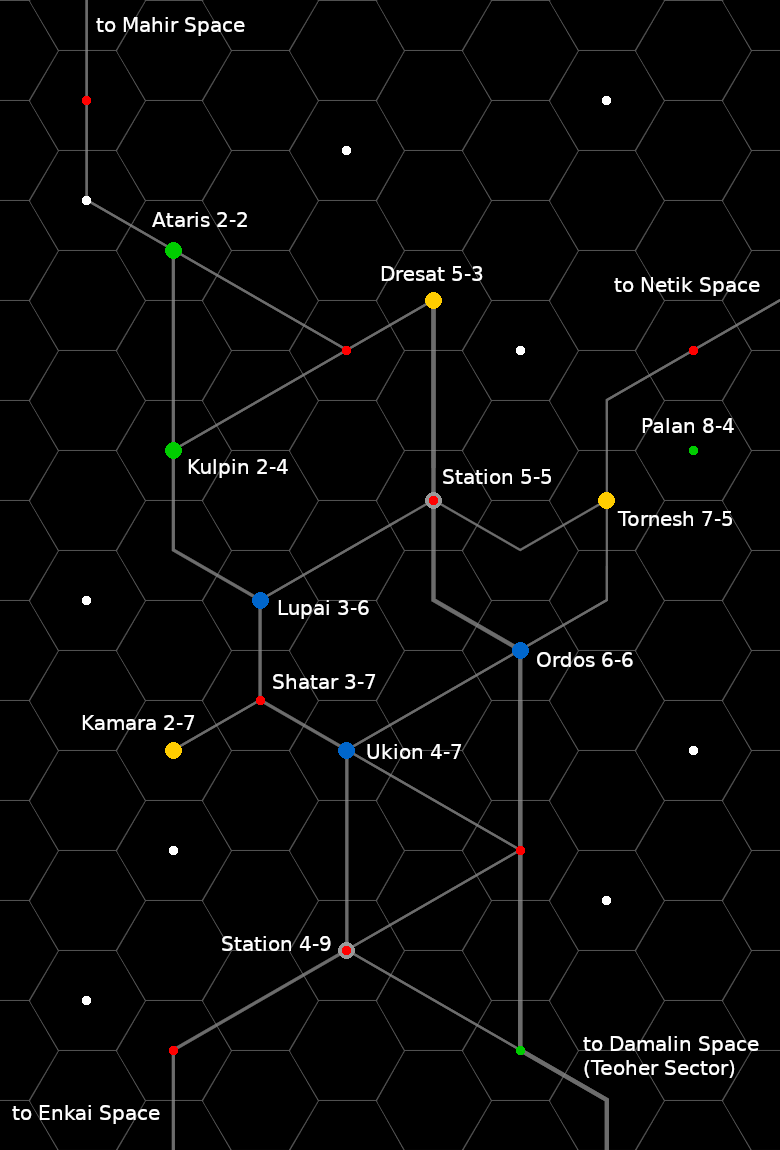 While it is still somewhat of a tossup between Scum and Villainy and Stars Without Number for the first Hyperspace Opera campaign, I am really liking the SWN sector map system and the worldbuilding implications that come from the limited ranges of Hyperspace drives.

The basic engines for any starship have a range of 1 hex, which takes 6 days to cover. The range and speed can be increased by upgrading the hyperdrive and installing additional fuel tanks, but aside from the costs it also takes up additional space and power that is no longer available for cargo space, weapons, and other upgrades. Since bulk cargo shipping is all about minimizing costs and speed is generally not a factor as long as the shipments arrive at a regular schedule, medium and heavy freighters are typically equipped with the cheapest hyperdrives possible. However, a range of only 1 hex rarely gets you anywhere, and a single extra fuel tank is much cheaper than an upgraded hyperdrive. As such, the standard for freighters is a range of 2 hexes, which take a transit time of 12 days.

The map shows all the possible routes for ships with a range of 2 hexes that allow them to refuel for the return trip. The systems not on the routes require at least a range of 4 hexes, which can be done with a Grade-2 hyperdrive and a single fuel tank. Such a ship is also capable of skipping any specific single systems along the freighter routes and avoid having to stop there for refueling. It also doubles the speed compared to commercial freighters, making it possible to overtake them in hyperspace and wait for them at their destination. And a Grade-3 hyperdrive that tripples the speed and range becomes a real game changer. A great thing to have the players spend all their hard earned money on and make them collect a lot of favors to get their hands on one.

A nice situation that emerged from this map is the connections between the mining planet Kamara and the two trade ports in Lupai and Ukon. Kamara is the main stronghold of the aspiring independent miners cooperative that is trying to free the miners from the control of the merchants on Lupai and Ordos. With a fuel station between Kamara and Ukon, the miners could transport their minerals to Ukon with really cheap old freighters with a range of only 1 hex, which are otherwise pretty much useless for anything else in the sector. However, that fuel station is in a location that would have very few other customers, except those who are deliberately trying to avoid having to stop at Lupai or Ukon. That completely forgettable fuel station could actually become a pretty important location for various adventures.