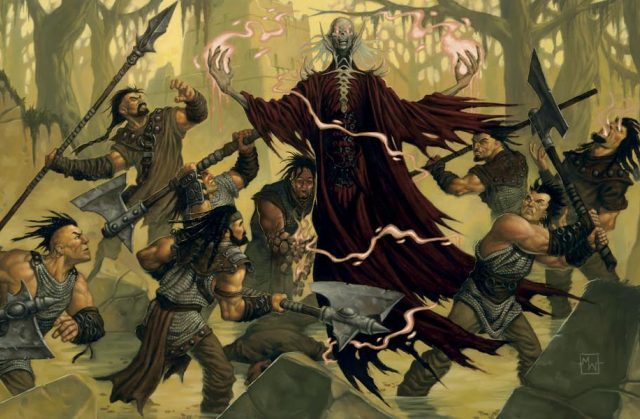 I know I shouldn’t…

So many campaign ideas, so little time. Actually, I have lots of time, I just like tinkering with new ideas so much I rarely really commit to seeing them through.

Back in November, I had taken the time to sit down and actually fully read through the original 1st edition Campaign Set for Forgotten Realms. And I found the world presented in it to really be much more inspiring and exciting in how it provides hooks for the GM to work with, in contrast to the bloated mess of pastoral quaintness and cartoony heroics it balooned into over the years and decades that followed. The first edition Campaign Set and sourcebook are really quite sparse on specific details, but that’s precisely what makes them useful tools for a GM to create a campaign, rather than big piles of homework you have to read and memorize to run your campaign correctly. Back then I was tinkering with some ideas to run another campaign in the Savage Frontier of the northern Sword Coast, but when it came to actually creating adventure content for players to play with, I found it somewhat lacking in actual stuff to do. All the stuff that I thought was really cool about the area seemed like it would be good for higher level parties, but I couldn’t really think about anything interesting to for a group of fresh explorers coming into the area for the first time, and so lost interest in the idea pretty quickly.

But reading the entire Campaign Set did also get me interested again in the Northeast region of Faerûn. And of all the campaign sourcebooks I ever had, the Unapproachable East for 3rd edition is a strong contender for my favorite sourcebook ever. I’ve loved it since I first got it when it came out, and it’s one of the few books I’ve kept around the entire time since getting rid of the big pile of D&D crap I had gathered over the years. But I never actually got around to use it and run any adventures in that part of the Forgotten Realms. Preparing myself for the worst, I checked the inside cover today. This book came out in 2003! I’ve never got around to use this setting in 19 years. I mean, I still got decades of campaigns ahead of me, but it’s really getting time to finally do this! 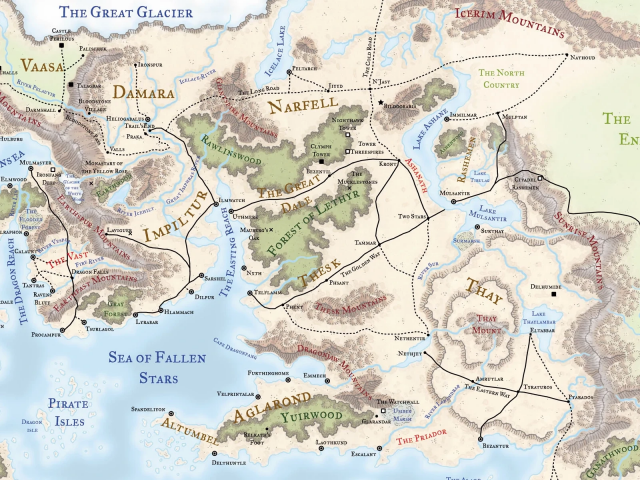 The area I am eying covers the regions called the Unapproachable East, the Cold Lands, and the Bloodstone Lands in various sources from different editions. There are Aglarond, Damara, the Great Vale, Impiltur, Narfell, Rashemen, Thay, and Thesk. There are good reasons why one could also include Vaasa and the Vast as being in this part of the world, but I think they are much more culturally oriented towards the Moonsea and Sembia and you have to make the cut somewhere.

Two thousand years ago, most of this area except for Aglarond and most of Thay made up the territory of the ancient Demonbinders of Narfell. To the East lay the lands of their great rivals of Raumathar, and after centuries of war the to civilizations completely destroyed each other with their dark sorcerous magic. Civilization never really returned to these lands in the centuries that followed and nearly all major settlements in this part of the world are found on the shores of the Sea of Fallen Stars and southern Thay.

Based on the map and the description of the peoples, I interpret this region as being stongly influenced by Southeast Europe around the Black Sea and Caspian Sea and the Carpathian and Caucasus Mountains. The Rashemi are a vague blend of Norse and Slavic influences, which actually does resemble the Rus who lived along the Dneipr in the Middle Ages. And the Nar tribes in the very north have some resemblance to Tartars. And the Endless Wastes to the east of the region are an explicit stand-in for the Eurasian Steppe, at one point having a big Mongol Horde adventure based around it. Staying with these cultural and geographic influences, I think it would be interesting to base the Great Dale on Lithuania, and the port cities of Impiltur or German merchant settlements on the Baltic Sea. The big elephant in the room is of course Thay. I think the best source for influences for Thay would actually be Persia, but I don’t really want to have a campaign in which the single Iranian nation is the evil empire threatening all their European neighbors. But instead I think it could be really cool to present Thay as an evil magocratic version of Byzantium. Not quite 100% sure how that would look like, but I think it sounds really quite fun.

The main media influence that pops to my mind when imagining this setting is The 13th Warrior. And you can never go wrong with this one! It is the most pure essence of oldschool D&D you’ll ever see on film. I also imagine it in ways very similar to my mental image of most of the Elric stories I’ve read, but I think they are pretty sparse on environment descriptions so other people might be imagining something very different. While I was looking at the cropped out map above for a long while, I was starting to see the vague outlines of Skyrim. Which I think actually fits perfectly as a reference point. I can absolutely see Whiterun as Thesk and Falkreath as the Great Vale. Solitude would work as a city in Impiltur and Riften as Telflamm. Wight infested Nord tombs would be perfect as the graves of Nar sorcerers, with Dragon Priests taking the role of undead Nar demonbinders. Oh, and the Companions are totally a Rashemi berserker lodge. And Red Wizards are like Thalmor, just saying.

To sum it up, my interpretation of this setting is The 13th Warrior in Skyrim on the Dneipr.

Even though I don’t want to set up this campaign as an oldschool hexcrawl, I also really don’t want to go back to the dark days of writing the players a big epic fantasy novel to act out. It still has to be a sandbox. While I was somewhat lost regarding what a new party of low level PCs could be doing in The Savage Frontier, I think this part of the Realms actually has some really good potential as a setting for just roaming around and exploring while having run-ins with the locals along the way. I wasn’t really sure what to do with ruins of ancient Illefarn in the great river valleys of the North that have been farmland for thousands of years. But the East comes across to me as a region that is much more remote and drastically less populated. Once you leave the coastal port cities behind, you’re out in the wilderness. And once you step off the few big trade roads, there’s no telling what you might run into. Even though they are long gone, the remains of ancient Narfell looms over everything. The source material conveniently describes a typical Nar ruin as small squat fortifications on the surface with massive labyrinths of underground tunnels beneath them, many of which still hold captured demons. With a great land that was never really resettled, these are perfect for extensive dungeon exploration. And as I mentioned above, old tombs of Nar sorcerers also fit in very well. In addition to that, there’s lots of marshes and swamps (though not shown on the map) and dark forests for hags and mysterious druids.

One thing that I noticed in the 1st edtion Campaign Set is how greatly focused on just humans Forgotten Realms originally was. In the East this is even more the case. Except for Aglarond, there’s never been any elven civilzations in this part of the world. There are a few small dwarf kingdoms in the Earthspur Mountains on the very western edge of the area that I defined, but that’s basically it. There is a population of half-elves deep in the forests of Aglarond that is culturally separate from the human cities on the coast, and there is mention of a few halflings having migrated to the port cities of Impiltur, but that’s the extend of nonhuman peoples in the area. The only exception being several tribes of gnolls who have been serving as mercenaries in the armies of Thay for many generations. There’s not even really mentions of orcs, except for some settled down Zhentarim mercenaries that arrived later in the official timeline (that I am ignoring). While I generally like the idea, having at least some nonhuman people to clash with is always a nice change. Not much mentioned in the sources, but a perfect fit in my opinion are ogers, trolls, and giants. A land of cold plains seems like just the place where you would find fog giants, my favorite kind of giant that I actually never had an opportunity to use. The Sea of Fallen Stars is well known as being home to Sahuagin. I’ve never really seen anything noteworthy done with them, so I think they would be really cool to use as enemies in adventures on the coast. I guess you can never go wrong with goblins either. You can always believe that they are around somewhere without ever deserving explicit mention. Since any kind of reptile people would feel out of place, and chitines are culturally connected to drow, which I really don’t want to have in this campaign, I was thinking of what other kind of cool pulpy humanoids might work here. And I think bullywugs could actually make for really cool main monstrous humanoids in this setting. Not quite as popular and famous as snake-men, ape-man, and mushroom-men, but frog-men are still classic pulp monsters. You just have to present them right. I think in more recent material, bullywugs have often been interpreted as particularly goofy looking goblins. But in their earlier incarnations they had stats basically matching orcs. Frog-orcs who are hiding in the swampy waters and attack with big mouths full of spiky teetch feel like awesome humanoid enemies to me.

2 thoughts on “The Cold Lands of the Unapproachable East”