While writing about the Star Wars games that I played, I noticed that almost all of them are pretty old by now. So I got to work to create some kind of timeline of what I consider the important books, comics, and games of the Expanded Universe and the result I got is this. 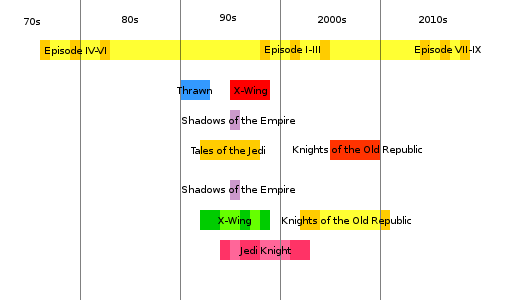 You can get the 90s Kid out of the 90s, but you can’t get the 90s out of the 90s Kid. It really seems like the golden age of Star Wars to me, which is not terribly surprising given how old I was then. If I would have been into anything else, I probably would still vonsider the 90s to be the best period it ever had.

Another thing that surprised me in hindsight that there were six years between the release of Episode 1 and Episode 3. Such restraint! It almost seems like they were making those movies one at at time. Which seems incredibly slow by today’s standards. At least I got to be relieved that the time between 3 and 7 was not nearly as long as the time between 6 and 1, which by this point would no longer have surprised me. Still, in trade school I have classmates who were not even born when Episode 1 was out.