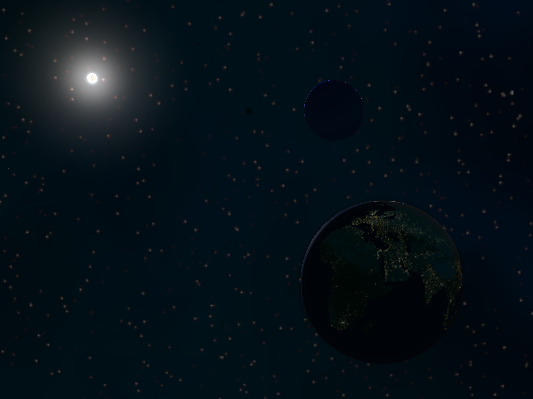 I never made any secrets about how much I love the worldbuilding of Morrowind. (It’s gameplay is a different matter.) And I never let an opportunity pass by to tell everyone how much I love Star Wars. I also liked the world of the old videogame Albion and the whole old Planetary Romance genre in general. When I wrote down my Project Forest Moon concept paper to spice up the Ancient Lands with more mythic and puply atmosphere, that title was just a name referencing the visual style of Endor in The Return of the Jedi. But that phrase stuck with me until I recently decided to have the Ancient Lands be set on an actual moon. I know a fair bit about astronomy and while I think scientific accuracy is vastly overrated in fantasy worldbuilding, I think no creator likes to create stuff they know to be wrong within the rules of their fictional world. So I sat down to figure out a configuration that is at least somewhat plausible if you’re not getting too specific about the exact numbers involved. Or in other words, I feel pretty confident that planets like this can exist if you just find the right numbers for masses and distances to keep everything in semi-stable balance.

Having an Earth-sized moon orbiting a gas giant (like the Rebel base on Yavin 4 in Star Wars) would have all kinds of “interesting” effects that would make any kind of Earth-like environment on it vastly implausible. And you’d also end up with all kinds of funkiness regarding day length and daily solar eclipses lasting for hours. To keep things much simpler and more familiar, I chose to make the big ball in the sky a gas dwarf instead.

So what is a gas dwarf?

Gas dwarves are the most recently discovered type of planet that exists in other star system, which look very much like gas giants but are much smaller than those. In their center is a solid rocky core like a common terrestial planet which is then surrounded by a massive atmosphere of hydrogen and helium. Planets like Earth or Venus have not enough gravity to hold on to these very light gases in significant quantities, but if you go just a little bigger in size gravity is strong enough to keep these huge balls of gas together. The total mass of gas dwarves is between 1.7 and 4 times the mass of the Earth and it appears that they are one of the most common types of planets in the universe. It’s just a random oddity of the solar system that we ended up not having any of these. Being so much smaller than a gas giant the gravitational effects and its magnetic field would be much smaller than what you have in a behemoth like Jupiter or even Neptune.

I recently got myself Universe Sandbox 2, which I’ve been fascinated about for a very long time, and made a quick simulation of what it might look like if you take Earth and switch the Moon for smallish gas dwarf. I started by taking Neptune and changing its mass to 2 Earth masses. The program then did the recalculation of it’s actual size automatically. As expected, two bodies of such similar size would actually form a binary planet, both orbiting about a point between them instead of one going around the other, with the world if the Ancient Lands not being actually a moon. But it’s close enough. The screenshot at the top of this post is taken directly from the simulation I made with everything being at actual scale, with the gas giant being the same distance away from Earth as the Moon. But it’s a lot bigger and the little black dot next to the bigger blue ball is what the Moon would look like from this perspective. At 8.5 times the radius of the moon the gas dwarf would take up an area in the sky 72 times bigger. Hydrogen clouds would also reflect light much better than moon rocks, so the light of a full moon would likely be hundreds of times brighter than what we get here on Earth. However, human eyes are actually really amazing at automatically adjusting to light levels to give the brain the appearance that everything is normally lit. We did measurements of light levels in greenhouses in school and rooms that seem to be evenly lit actually get several times the amount of light close the sun facing windows than at the opposite side. Sunlight is obviously brighter than the light of a full moon, but human eyes adjust so well that you probably wouldn not have suspected that it is actually 400.000 times brighter. So even with a full moon being 400 times brighter than on Earth, the nights wouldn’t actually look much brighter to the eyes of people.

This is the Earth and the gas dwarf seen side on at actual scale. This shows the actual relative sizes and distances of the two bodies.

Tidal effects would obviously be much more severe as those caused by the Moon. However in practice, the actual rise and fall of the water is influenced much more significantly by the shape of coastlines than the gravitational pull of the moon. While there would be some bays experiencing absolutely astonishing tides, it should not be too dramatic for most coasts to completely change life near the sea. The time between high tide and low tide remains roughly 6 hours since the day is 24 hours in length. The orbital speed of the gas dwarf is marginal compared to the rotation of the forest planet.

Sadly, one thing that Universe Sandbox can not simulate is tidal locking. Tidal locking is when a smaller body slows down its rotation to the point where it matches its orbit around the larger body, causing it to always show the same side to the larger body, while the larger body would remain stationary in the sky of the smaller one. I think this is boring and want my wandering gas moon, which is why I gave it such a low mass to reduce this effect. In reality, the effects that cause tidal locking are working on every smaller body orbiting a larger one. The only question is how long it will take for the rotation to slow down before a true lock is reached. For the Earth and the Sun, tidal locking actually takes longer to reach than the Sun is going to live. One number I’ve found is that the Earth actually had days of only 6 hours when it first formed. So the fate of my world is sealed and it will eventually tidally lock to the gas dwarf. But the gas dwarf has only twice the mass of the forest planet while in comparison the Earth has 80 times the mass of the Moon. So I see it as completely plausible that a after three billion years the forest planet still has a nice 24 hour day and is a very far way from getting locked and the gas giant keeps moving in the sky.

Another interesting number is the length of a month. That is time from one full moon to the next full moon. In this particular configuration of masses and distances that I uses this turned out to be almost exatly 16 days. That would be 4 days from new moon to half moon and from half moon to full moon, and the same back of course. 16 is a very attractive number, being a square of an even number, so I keep that for the days in a month. For the number of months in a year, 24 would also be a very attractive number, being a multiple of 12. If a month where exactly 16.0 days and a year exactly 24.0 months, it would lead to a year of 384 days. Very close to what we think of when we are talking about “a year” as a unit of time. But such a perfect synchronisation would seem vastly implausible to me, so in the tradition of the Japanese aesthetic of wabi-sabi I am setting the length of the year at roughly 381 days, with the occasional leap day now and then. And sometimes a year happens to have only 15 months. Since I am lazy with such things and calendars show up rarely in practice in campaign, I’m not making any names for months or days of the week. It’s simply the first day of the eleventh month. With each month beginning at the new moon.

Another cool subject is solar eclipses. Because with a diameter 8 times larger than the Moon, the gas dwarf has a really easy time completely covering up the sun. In reality the Moon passes between the Earth and the Sun once every month during the new moon. However in most months it will pass actually above or below the sun in the sky since all orbits are not perfectly flat. How often you get solar eclipses depends on the tilt of the orbit, the size of the moon compared to the sun, and the length of a month, but they will be most common during spring and fall. There are 16 opportunities for an eclipse every year and a 50% chance for any place on the planet to be on the sun facing side when it happens, resulting in a total maximum of 8 if the orbits where perfectly flat. I really don’t want to worry about the exact math of this, so I am just arbitrarily setting the number of total eclipses a place experiences in a year at 1 or 2. However, I am pretty sure there is an orbital tilt that would lead to this result. I just don’t want to calculate that number as it will never come up in a game. On Earth a solar eclipse can last up to eight minutes. With the gas giant being eight times wider but it going around the planet at double the speed, this gives us eclipses of up to 30 minutes. So to streamline the numbers for practical use, a total eclipse lasts for 10 to 30 minutes.

So that’s the sky and the resulting calendar in the Ancient Lands. I actually tried to simulate each of the two planets having a small moon of their own, adding Deimos and Phobos to the system. When I ran the simulation, the Earth immediately flung its moon on a course to the sun while the gas dwarf threw its moon straight at Earth, leaving a huge crater lake in Morocco. I am pretty sure it should be possible to have two minor moons in the sky as well, but I am not going to include these into the simulation. They are just there in the sky looking pretty and not having any noticable effect on the planet below.