Just a couple of days ago I got very excited about finally being able to get a look at Crypts & Things, which I’ve often seen praised as a fantastic Sword & Sorcery take on OSR games. 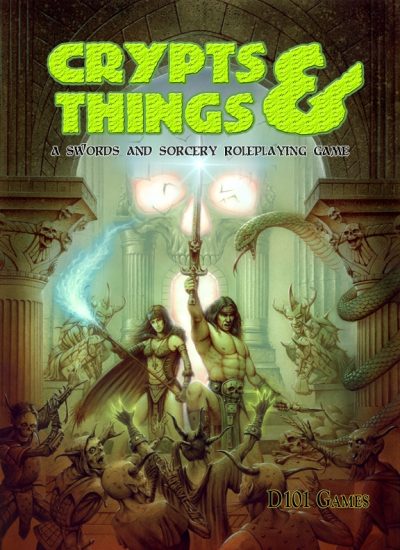 But I have to admit that very quickly after starting to read, my enthusiasm for it went down very fast. Crypts & Things is not a bad game and it’s certainly more Sword & Sorcery than other OSR games, even more than Astonishing Swordsmen & Sorcerers of Hyperborea. But my feelings on it are that it’s not a particularly impressive game and that it follows a concept of Sword & Sorcery that is exclusively Conan and Conan-clones, which is perhaps the dominating view among OSR players.

At ita base, Crypts & Things is Swords & Wizardry with a couple of variant rules and new mechanics. I’m very unimpressed with S&W to begin with and pretty much all the shortcomings I see in it apply to C&T as well. There are however a couple of nee ideas that I quite like. In C&T, bonuses for high ability scores are the same as usual, but penalties for low scores never get greater than -1.
The effect is almost the same of rolling 2d6+6, which I wrote about last month. This makes characters that are good at many things, but not really bad at anything, which fits Sword & Sorcery very well.

C&T has its own classes, of which the Fighter,Sorcerer, and Thief are pretty much as usual. Fighters get access to various weapon skills as they advance but the bonuses are so small that it just seems to add complexity for no real benefit. What I quite like however is that the thief’s skills are not exclusive to thieves. All characters can make a skill check based on their character level, but each class gets a +3 bonus to activities that fit their archetype. The barbarian is a new fourth class that turned out not to be another berserker as you usually see in D&D, but actually a lighter warrior with better wilderness skills. Filling the very same role as my Scout class for LotFP. Of course, I consider this a goo idea as well.

There are also five special classes including an elementalist but also lizardman and serpentman characters which can be used as NPCs or might be allowed for players in some campaigns.

Next there’s 11 pages of tables to create randomly generated character backstories.I’ve never been a fan of any such things.

A big difference to S&W is the spell list for sorcerers which consists mostly of magic-user spells and a few cleric healing spell. It’s still the regular D&D spells,which I find particularly unsuited for Sword & Sorcery. These spells are in three groups and classed as white gray,or black magic. They function very much the same but casting a white magic spells alerts demons that are close by and black magic spells can increase a character’s corruption. Interesting idea for a new mechanic, but I think this is an area where C&T falls flat to me.

Corruption is a cool concept in Sword & Sorcery, but in C&T it simply accumulates unti the character gets a mutation that seems mostly cosmetic. Kt feels overly bare bones to me.

Same thing with Sanity. You get insanity points as the game progresses and once you got too many the character goes mad and is out of the game.

Then there is also Luck, which is basically a regular action point mechanic with not much else to it from what I can see from my brief reading.

These are all concepts that are implicitly present in much Sword & Sorcery (particularly the hammy Clonan type) and that could be quite interesting to have in the game, but the mechanics presented here all strike me as very bare bones, bland, and also somewhat boring. I know I am a very tough customer when it comes to variant mechanics for simple games, but neither of these three makes me want to see it in action. I applaude the intend, but the execution isn’t doing anything for me.

All in all, Crypts & Things strikes me as a game that should work well and that I would play without complaints if invited to it, but I don’t really see anything in it that would make me want to run it instead of Lamentations of the Flame Princess. You can see that it’s made for Sword & Sorcery, but doesn’t seem to be any more suited for it than any other generic OSR game.