One of the major changes I made when I shuffled around some parts of the Ancient Lands earlier this month, was the completely removal of the grass covered plains of Senkand on both sides of the Red River, which formed the border between the more classic fantasy style North and the Southeast Asian inspired South.. One reason was that it broke up the single continous, world-spanning forest I had in mind for the setting, but I also learned that you usually don’t have any large dry regions on the eastern coasts of continents. (Arabia and Texas being exceptions because both Persia and the Southern United States are somehow interfering with oceanic winds going from the equator to the pole, as they would have to go over land instead of following the coast.) I wasn’t really sure what to do with this region instead, and in a way that supports the style and the themes of the setting. But I think I got it now. 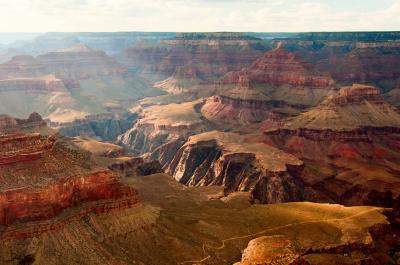 The Grand Canyon seems like a perfect match for the kind of environment I need. It’s huge. It’s impressive. It’s exotic looking. And it also is majestic while still being quite desolate and quiet. At least it looks like that in pictures. Not quite sure if would be actually possible to have vast forest growing right up to the canyons edges, but I don’t think there are a lot of people who would know that either. And it looks cool. So what? It also makes for a nice homeland for the Ruyaki dark elves, for which I still didn’t have a lot of ideas other than somehow basing them on the Redoran from Morrowind.

Another change I decided to make is to drop the idea of an overland route from the Falden lands on the Inner Sea to the Eylahen lands in the North. Since it would cut directly through the giant, mystical, and unexplored forest of the northern lands, it wouldn’t really seem that giant, mystical, and unexplored anymore. Not a big loss, since I didn’t rally have any ideas what to do with this huge major highway stright through pretty much blank space on the map.

This means that all contact between the Falden and the Eylahen would now have to happen by taking ships all the way around the ocean coast. It also means that the Kaas tribes would only have any contact with the rest of the Ancient Lands through the Eylahen territories, which is an interesting new development for me. One could reasonably say that I am way overthinking things here and putting way too much detail into things nobody will ever notice, but I really like it when I have such high degrees of consistency. And it also happens to help me come up with ideas. Working with complete freedom is quite hard. Once you have several geographic and cultural limitations in place, good ideas actually come a lot easier, as you can build on something that is already there. Where there used to be a white void on the map, staring up and you and waiting for you to do something, the map now is starting to ask specific questions that it wants you to answer. And that’s usually when I come up with my best ideas.

2 thoughts on “Reworking the Ancient Lands: The Red River”