The Sakaya are a group of people from many different tribes who live countless small villages in the Vestanen Mountains, regarding all of each others as equals, regardless of their birth. They are lead by mystics who preserve and spread the teachings of their founders, which emphazise equality, humility, self-sufficiency, and excelling at ones talents. They have no nobles and no slaves and also do not worship any gods or spirits, but they make regular sacrifices to the local spirits as tribute for beeing allowed to live and work on their land. 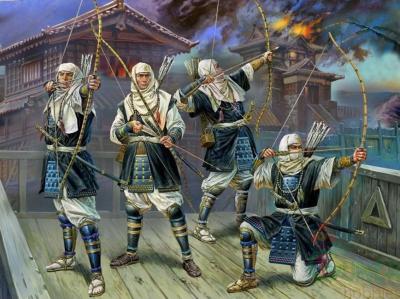 Though the Sakaya regard each other as equals and all their villages and monasteries are forbidden from fighting among themselves, each community has its own warriors to defend against raiders and stealing of their land by other clans. Some communities consists entirely of warriors known as Sakaya-kera, who were founded to come to the aid of villages under attack by superior foes. The Sakaya-kera often take work as mercenaries for other clans, as fighting is their profession and it is not appropriate for them to seek other work when their talents are not needed by the Sakaya. Sixty years ago a commander brought many of these groups together to fight not for some foreign lord, but for their own glory and to capture wealth for the Sakaya. Since then the Sakaya-kera have become one of the strongest and most feared armies in the Ancient Lands. Usually they are spread out as individual companies doing mercenary work, but will often come together as groups of many hundreds or thousands for a raid against a wealthy city before dispersing again. If the High Commander sends out a call, he can gather an army that rivals the troops of the Mayaka king. 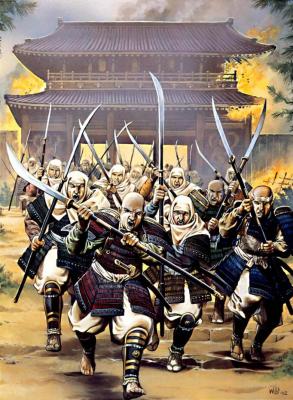 The Sakaya are intended as one of the major power groups in the Ancient Lands. The original order plays only a relatively minor role, being mostly confined to small villages and monasteries in the Vestanen Mountains, where they live relatively isolated from the rest of the world. The Sakaya-kera on the other hand are one of the big military powerhouses. They have a headquarter and a commander, but just like the villages and monasteries, each company is highly autonomous and follows the teachings of the founders as they see fit. Since they often recruit new members wherever they find promising candidates and usually have no mystics among their numbers, many Sakaya-kera only know the principles of doing what you do best and not submitting to the rule of any nobles or priests. The other villages and monasteries, including their own warriors, don’t approve of the Sakaya-keras plundering of rich towns and cities, and few of the loot ever actually makes it back to them. But as there is no single ruler who could rein in the High Commander, they are not able to do anything about it. Since most people outside the Vestanen Mountains only have encounters with Sakaya-kera, the Sakaya as a whole have a rather low reputation throughout the Ancient Lands and often don’t use their traditional armor and symbols when visiting other lands.