While I am revising my Ancient Lands setting, I’ve set down to once more give some deep thoughts to the underlying conflicts of the world. I make no secret about my oppinion that the Mass Effect series has the best worldbuilding I’ve ever seen anywhere. Not because there is a lot of lore on the locations and a long detailed history. In fact, there is barely anything in that regard, at least if you don’t read up on it in the ingame codex. Perhaps there is some, but I didn’t read any of it and I still think the worldbuilding is superb. The Mass Effect galaxy is incredible because it has lots of factions that are tightly interconnected with each other, forming a complex web of conflicts and alliances in which absolutely everyone is included in some way. And these groups are friends or enemies with each other not simply because the writers say so, but because they share a common past which can be sufficiently explained in three or four sentences but gives them good reason to feel what they feel, and in a way that perhaps doesn’t make you approve of, but at least understand their views. The same company that made the Mass Effect games also made the Dragon Age series at the same time, and while I am not as much a fan of that setting, it also excels at having lots of conflicts that affect everyone in some way and in which each side has some good points.

This made me realize that conflicts are really what makes a fictional setting tick. Cultures, landscapes, religion, and magic are all nice, but to get your audience invested in what is going on in the world and its people, underlying conflicts probably define the world more than anything else. This applies both to settings for roleplaying games, in which you usually want to give the players the option to chose the side their characters are taking, and to episodic fiction in which different parts and aspects of the world are explored in each story arc. So I’ve been looking at all the other fantasy and sci-fi worlds I think have great worldbuilding with interesting conflicts and dynamics between factions. From Star Wars to the Witcher, and from Halo to Forgotten Realms. And I made an important discovery when it comes to creating conflicts: Even if you have a conflict in which both sides have a point and you could easily get into the mind of a character of either group, the conflicts still always started because someone was a giant dick!

Back to Mass Effect, lots of nice sidestories with difficult moral descisions involve the alien Krogans and the human Cerberus group. In many cases you can sympathize with them, perhaps even support them, and actually very much like individual characters of these groups, even though many people consider them evil and villains. But the thing is that in the past their leaders made some descisions and ordered some actions that were really total dick moves. No questions about that; those things were wrong and they got what they deserved. But those past wrongs were not commited by the specific people you’re dealing with right now. These people can be really nice guys and they might not have done anything wrong. But for some reason or another, they are now part of this group that has a long and violent conflict with some other groups. The source of the conflict lies in the past, but it established some facts that still matter a lot right now. And I think that’s really the key when setting up some underlying conflicts for a setting rich with ambigous characters and descisions. Creating a conflict in which neither side is truly bad is really difficult, if not outright impossible. But that does not have to prevent the existence of conflicts in which neither side is truly bad now. If you want to set up a conflict that lasts for generations and affects whole peoples, make the conflict start with one terrible person making a really unfair descision. Doesn’t really matter if it’s too much black and white, because that person likely is long dead or may not appear in the story at all. What does matter is the people who are on opposing sides right now, and being sufficiently removed from the original source of the conflict, they can easily be as ambigous as you want. In Halo 2, some of the alien enemies quit the Covenant and start a civil war against their former masters, which put them on the same side as the humans. But that doesn’t change the fact that they had been the officers in charge of the Covenant army that had been leading a war of annihilation against humanity for the last 30 years. They hardly could be called friends by any stretch, but from that part in the story they have to work together and fight their common enemy, whether they like it or not. There still is great hostility between them and from a worldbuilding perspective you can still regard them as two opposing sides in conflict with each other. You can sympathize with characters on both sides, but also have no trouble at all understanding accepting that they won’t be nice to each other and getting into fights.

So this is my appeal and my advice: Conflicts neither have to be black and white, nor fairly balanced. You can have very good underlying conflicts built into a setting, which started out with one side being the villain, but by now has developed into a state of regular agression from both sides. 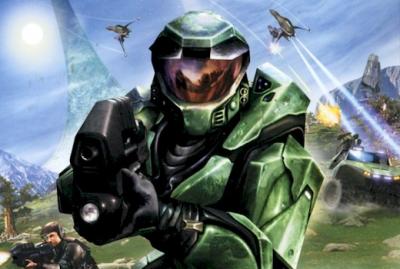 Old enough to remember when Halo was first announced. At that time Half-Life and Unreal were the big first person shoters of the day that everyone had to have played. (Though I admit I never played Unreal.) Call of Duty and Battlefield didn’t even exist yet, though there was the Medal of Honor series, which quite likely many of you never heard of. It was the time before the decade of World War II shoters and science-fiction was really the big deal, continuing the tradition of Doom and Quake. The first screenshots were just mind blowing. Because it had outdoor areas that didn’t look like total crap! The first videos of the Warthog jeep were just out of this world. The hype was on almost instantly. When Microsoft bought Bungie and announced that Halo would be the launch title for their Xbox project, it really ruffled some feather. The internet was much smaller back in 2000, but there was still plenty of nerd rage in which I heartily participated. In 2001 the game was released and a huge success, and a few years later we actually did get a PC port of the game. In 2012 followed the 10 year anniversary edition with improved graphics for Xbox 360, which I did get used last year. This review is based on my recent playthrough of this version and how it plays now, looking back at the game 13 years later.

When I first played the game, I really quite liked it a lot. Not quite as much as Half-Life or Half-Life 2, but still a fun game. And when I later got an XBox 360 I also got Halo and played through another two times. So this one it was probably my fourth playthrough of the game. I played it on Hard. The one above Normal and below Very Hard. The game doesn’t call it like that, but I already feel too old to learn all the fancy difficulty names games have these days. It was hard. The one with the two swords, but without the skull. And I have to admit, that game is really terribly boring. Okay, in the games defense, I played it the fourth time and I have an exceptional memory for environments, so I always had a pretty good idea what would be behind the next corner and where all the surprise enemy spawns would be. But still, it’s mostly a straight corridor shoter where you run down these big long hallways. These very, very long hallways of constantly repeating copy and paste segments. And playing on Hard meant I died a good number of time and checkpoints are not nearly as tight as in recent Call of Duty games, so effectively I probably ran down twice as many corridors as the actual level length. On top of that, Halo is also very effecient at recycling levels. Usually you have to fight your way from point A to point B, then there is a cutscene and you have to go almost all the way back to A again, this time with different enemies. Generally I like the idea, as fighting your way out of the base you stormed makes perfect sense. But since there is such an excessive amount of copy-paste corridor segments it really becomes very repetitive, as the levels are also pretty long.