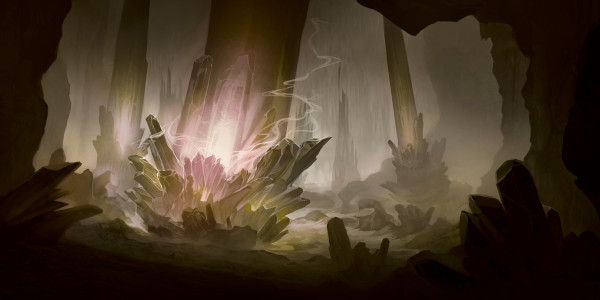 There is something about areas that have been corrupted the demonic powers of sorcery that occadionally leads to the growth of formations of pale yellow crystals that can grow to enormous size. The crystals are extremely hard and almost impossible to remove once they have started to appear.

Instead of feeding on the sorcerous power lingering at the sites of demonic rituals, the destruction of powerful demons, or the lairs of ancient sorcerers, the growth of the crystals appears to actually increase the corruption of the surrounding area. While the initial spread of the crystals can happen quite rapidly over the span of just months, the growth seems to slow down and stop eventually. If this were not the case, some sages think the crystals could eventually take over the entire world, and would likely have done so long ago.

But even if they don’t pose a serious threat to the world as a whole, the areas covered by the hard yellow formations are left as otherwise barren wastelands. In many places corrupted by sorcery, the demonic influence seems to slowly ebb away over the course of man centuries and eventually become barely detectable. But as far as everyone’s been able to tell so far, the crystaline formations are eternal.

The crystals have some limited uses in a number of sorcerous rituals, but their incredible hardness makes it very difficult to remove large chunks of it. The corruption around them also makes them dangerous to carry, so there is little trade with these crystals among alchemists.

4 thoughts on “The Yellow Crystals Fields”