I was once again browsing through old posts on Planet Algol to help me get into the right mindset for overhauling Planet Kaendor as a more wild, more weird, and more quirky world than it’s been before. And there I stumbled upon this: 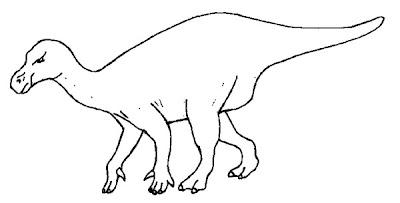 Also known as pack lizards, Nguamodons are a horse-sized species of iguanodon. Herbivores that can survive for two weeks without food or water, they are commonly used as pack animals although any burden limits them to a quadrupedal gait that reduces their speed and renders them unable to use their thumb spikes in combat. They are placid, stupid and easily spooked.

I know that thing! That’s a droha! Seen in the wild over six years before I thought about the idea. I based the droha on a hadrosaurus instead of an iguanodon, but otherwise it’s really the same thing. I even set it at the same 3 HD as the nguamodon.

So someone had the same identical idea, years before me. So what. It actually only proves that there is at least one person out there who agrees with me that this is the cool shit for making great alien fantasy settings.