If you can’t be a good example, you can at least be a cautious warning.

I’ve been thinking about how I can get myself into thinking of Planet Kaendor as a wilderness setting instead of always ending up putting all my efforts into the city states, which are supposed to be exceptional special cases in the setting and not the site of much adventure.

And in the process, I realized that the whole geographical layout that I cobbled together years ago is actually really bad.

The idea for the setting is that there are a few small clusters of civilization on the coast of the mainland, beyond of which lies a vast expanse of strange and wondrous forests. And the one thing the setting has in the way of major bad guys are the naga, who used to control much of the world in the ancient past, but are now driven back into the southern jungles where they plot their return. 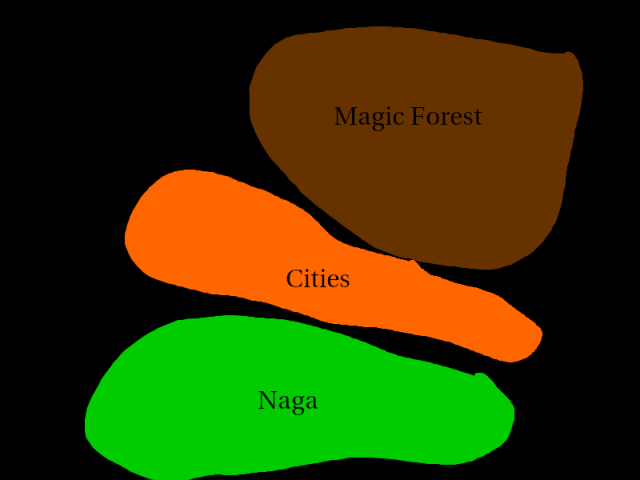 Breaking down the layout for the overall geography like this immediately show the problem. The big weird forest and the naga jungles are in opposite directions? Delving deeper into the wilderness does not bring the party in closer contact with the naga, it takes them further away from them. And it doesn’t make sense for the naga to do some plotting and scheming in old ruins in the great forests because they would first have to get through the cities to get there.

I think all the way back when I came up with the general map layout, I didn’t really had much thought put into the naga yet, and only decided that I want to have them somewhere. But with the ways the ideas have morphed in the years since then, it has become increasingly impractical for the new concept.

2 thoughts on “This was a mistake”