I saw this picture and had to turn it into a creature. Took just an hour to create this. 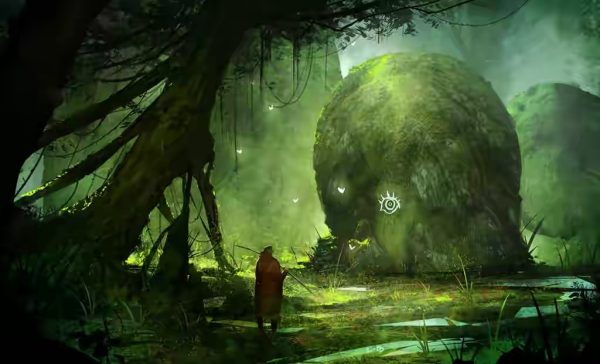 The swamp sage is a spirits that lives in swamps, marshes, and other wetlands. Its body consist of a large shell that often looks like a boulder overgrown with moss and lichen and can easily be mistaken for such when its small crustacean legs are tugged in below it under the water. There is a small opening in the shell at the creature front that houses its face, which consists of four small black eyes and its maw. Swamp sages are reclusive and rarely seek interaction with people, but are of a calm and nonthreatening demeanor and occasionally come together to consult with each other when something is causing disturbances in their territory. They usually try to avoid fights and use their fetid cloud and entangling plants abilities to retreat from attackers. If forced to defend themselves, they can spit a spray of acid from their mouths and strike out with one of their four long tongues.

Swamp sages know almost everything that is going on in their homes and know much about a swamp’s or marsh’s history and inhabitants. If something is threatening their territory, they usually prefer to advise others on how to deal with the situation than engaging threats themselves.

Amphibious: The swamp sage can breathe air and water.
Magic Resistance: The swamp sage has advantage on saving throws against spells and other magical effects.
Innate Spellcasting: The swamp sage’s innate spellcasting ability is Charisma (spell save DC 12). It can innately cast the following spells, requiring no components:

At will: dancing lights, druidcraft
1/day each: commune with nature, confusion

Multiattack: The swamp sage uses either its Acid Spray, Entangling Plants, or Fetid Cloud, then makes a tentacle attack.
Tentacles: Melee Weapon Attack: +5 to hit, reach 10 ft., one target. Hit: 7 (1d8 + 3) bludgeoning damage.
Acid Spray (Recharge 6): The swamp sage spits acid in a 15-feet cone. Each creature in that cone must make a DC 13 Dexterity saving throw, taking 10 (3d6) acid damage on a failed save, or half as much damage on a successful one.
Entangling Plants (Recharge 5-6): Grasping roots and vines sprout in a 30-foot radius centered on the swamp sage, withering away after 1 minute. For the duration, that area is difficult terrain for non plant creatures. In addition, each creature of the swamp sage’s choice in that area when the plants appear must succeed on a DC 13 Strength saving throw or become restrained. A creature can use its action to make a DC 13 Strength check, freeing itself or another entangled creature within reach on a success.
Fetid Cloud (Recharge 6): A 15‐foot radius cloud of disgusting green gas extends out from the swamp sage. The gas spreads around corners, and its area is lightly obscured. It lasts for 1 minute or until a strong wind disperses it. Any creature that starts its turn in that area must succeed on a DC 13 Constitution saving throw or be poisoned until the start of its next turn. While poisoned in this way, the target can take either an action or a bonus action on its turn, not both, and can’t take reactions.

One thought on “Swamp Sage”