As my focus is turning away from the basic worldbuilding for the setting and towards the practical work of preparing an actual campaign and adventures, I’ve been noticing that the setting is still very much lacking in the way of plot hooks. Poking around in strange ruins in the wilderness and dealing with alien spirits and dangerous sorcerers is all fun and well, but why are the characters doing that? What greater purpose do their activities serve? Having stories emerge from the players’ choices and actions is fantastic, but you can’t have something come from nothing. Which is why great settings almost always have some form of underlying tension. Which so far Kaendor has been lacking. There is this concept of civilization being under pressure by the erratic and volatile forces of nature, but I found out that this is too fuzzy to really build adventures on. There is also the idea that sorcery creates terrible environmental damage which most people fear and oppose, but it raises the question why anyone would turn to it other than for moustache twirling evil. 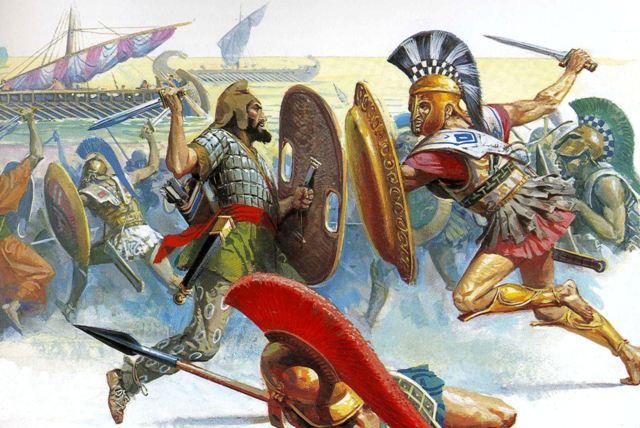 In practice, larger scale conflicts come in just two basic forms. Competition for a resource of which there isn’t enough to cover the amounts that everyone wants, and contradicting opinions on what shape society and culture should take. Whatever reasons and justifications people give for why they fight or oppose others, it almost always comes down to one of these two as the root cause. Both the themes of a permanent struggle against a hostile environment and the lure of the powerful but dangerous tool of sorcery are closely connected with competition for vital but scarce resources.

In the lands of Kaendor, the omnipresent forests keeps growing back exceptionally fast and populations of animals are almost impossibly difficult to control. The climate makes storms, floods, draughts, and wildfires extremely unpredictable, and earthquakes, blights, and pests are a constant threat. Maintaining the small and limited areas of farmable land is a constant struggle and claiming more land almost impossibly difficult. This makes maintaining a stable supply of grain and access to large amounts of salt for the preservation of food a primariy concern for all rulers. A third resource that is almost as critical for the survival and prosperity of the domains is tin for the production of bronze.

Because civilization in Kaendor is both small and scattered across great distances, invasions and conquest are not practical approaches to securing access to these vital resources. Armies arriving on ships have little means to assault or besiege fortified strongholds far away from home, and even when a distant domain can be taken it is almost impossible to hold. The distances involved make it very difficult to control whoever is put in charge or to respond to rebellions once the conquering armies have returned home. Raiding is a much more common form of warfare, but with most resources being stored within the walls of well defended strongholds, this approach is very unreliable and carries great risks, and is usually taken only out of desperation.

The most common, and most effective way, in which strong rulers and powerful city states secure their access to vital resources is by controlling the trade with the smaller domains. All the domain rely on trade across the Endless Sea and the Southern Sea for resources they don’t have themselves, and even the Wilders have extensive trade relationships among their tribes. With their great riches and large numbers of merchant and war ships, the larger city states have a great amount of influence over all trade. They have the power to dictate who can sell which goods and for which prices, and make demands that serve their own continued interests. Domains that have such power over others are always trying to maintain and expand it, while those who are under the influence of more powerful domains are constantly searching for ways to escape it. This is the primary source of conflict between domains in Kaendor.

The specifics of commerce and the intricacies of trade power aren’t of any greater relevance to either the setting or the activities in which players are involved. Instead, the purpose of this background is to provide motivations for people in power to set events into motion in which the players can become involved. Rulers are always interested in finding ways to weaken the influence of their enemies or the means to reduce their dependency on trade for certain resources with their rivals. Much of it is politics that does not involve the players, but in the world of Kaendor there are also always many opportunities to gain support from the spirits of the land and the gods of the forest and the sea. Similarly, the spirits are the only ones able to stop changes to the environment that threaten the prosperity and survival of a domain.

Both desperation and ambition can also be strong motivations to turn towards the lure of sorcery. The chaotic magics of sorcery can bend nature to its will and can be a source of great power and riches, even though it is well known that its practice drains the land of life and in time warps and corrupts that which remains. When times are dire, this steep price might appear worth paying, but even more often prideful sorcerers believe that they have found ways to contain the corruption and prevent or at least limit the spread of the blight. Some are motivated by greed and others by the more noble goal to ensure the survival of their domains. But among the common people and the servants of the gods, hardship and abandoning their homes for new lands are far preferable to this madness.

Another aspect that naturally follows from this underlying tension is the emergence of crime. When the larger city states control access to certain goods and determine prices that only benefit themselves, smuggling becomes a major part of trade. Smuggling in Kaendor is not simply about some men rowing to shore at night to unload a few boxes of goods outlawed by the lord of the domain. It’s a vast network reaching from Var Sharaz all the way to Nevald in the Northern Sea, consisting of wealthy merchants, pirates, and corrupt officials. There might well be not a single palace anywhere in Kaendor that doesn’t have two or three people involved in smuggling, and many of their biggest customers are minor lords who wish to be doing business without knowledge by the city states. Most smugglers trade in bulk goods, but their connnections and secrecy enable them to get hold of almost everything for the right price and when time not a pressing issue. Pirates rely entirely on smugglers to sell their plunder and many leaders make some additional money at the side with blackmail, extortion, and bringing in debts for their associates. Smugglers make for great sources of information and rare magic resources, and questionable allies. They can also serve as antagonists who are introducing new trouble by threatening befriended merchants or lords, accidentally angering or awakening spirits while hiding out in forbidden caves, working with sorcerers, or bringing in disrupting magic object from distant lands.

None of these things are exactly material for adventures in strange woods and mysterious ruins. But they do make a solid foundation for why the players have to go out into the wilderness, either to find something that can help solving a conflict, or to stop a threatening disasters that has been set into motion by the desperation or ambition of influential people.