Work on the Ancient Lands  setting more or less ended early last year because I just couldn’t get my dreams for a fantastic world fit together with the needs of fantastic adventures. Last winter I tried putting my creative energies somewhere else and started working on the medieval Baltic Sea dark fantasy world Dark World, but I lost interest in that pretty soon. Instead, I went back to making my alternate timeline for Knights of the Old Republic a reality. Which actually went quite well.

The idea of Bronze Age warriors riding on great reptiles through an endless forest dominated by strange magical beings just never completely faded from my mind. 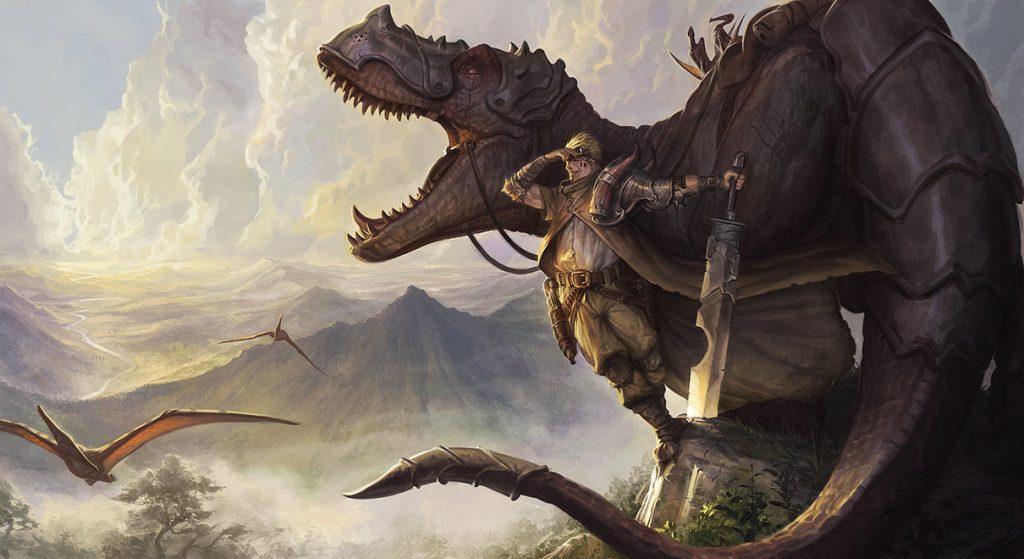 And how could I? Once you’ve seen perfection, how could you ever be content with less?

The problem was never with the elements I wanted to include in such a setting. The reason things never really worked and came together was that I had painted myself into a corner with what I wanted characters and adventures within that world to be like. Somehow I got that idea in my head that I don’t wannt to run campaigns that are about such banal things like permanently chasing after piles of gold, or seeking glory in killing piles of enemies. Which is a valid aesthetic choice, but it turned out to just not work when you still approach characters and adventures with the mindset of Dungeons & Dragons.

Originally, my idea to make some kind of wilderness warriors campaign started with a fascination for the E6 variant of D&D 3rd Edition that cuts the 20 level progression down to 6 and then has characters gain more low-level abilities instead of becoming increasingly more powerful. Later I moved on to Basic/Expert and from that to Lamentations of the Flame Princess, and finally to Barbarians of Lemuria. with a short detour through Symbaroum. But even though the later two are classless systems with more flexible systems for experience, they still come with very similar assumption about what a fantasy hero is and does.

But this summer, I finally managed to understand Apocalypse World. I had to read the whole book end to end probably five times, but even when I first read it a year before, I immediately became aware that there’s a really fascinating game hidden in the unorganized heap of rambling and unexplained game terms. At some point I had looked into Dungeon World, which is based on the same mechanics adapted for fantasy settings, but it tries to use the mechanics to recreate the style of Dungeons & Dragons. In the process, it loses what makes Apocalpyse World feel different.

Last year, Mick Gordon gave a great presentation at GDC about how he created the soundtrack for the new Doom. His instructions were that he had to create music that nobody had ever heard before, that fit the game perfectly, and that would be instantly loved by fans. Which he actually did, with huge success. And one of the big lessons that came out of that work was “to change the outcome, change the process”. And since I started to really dig into the rules of Apocalypse World and working out how it is meant to be used, I discovered this to be a really significant realization. For several years I had tried to create something that is unlike D&D, while still approaching like creating content for D&D. When put like that, it really doesn’t seem surprising that the whole effort repeatedly bogged down, even though I tried to start over again several times.

To get a different result, you have to use a different approach. And Apocalypse World is indeed a very different approach. Without getting too deeply into the specifics of the rules, one difference that impressed me the most is the approach to the different character types that players can play. Character classes are defined primarily by a set of abilities, very often in combination with a narrow set of equipment. These are all in turn based on tasks. Fighters do the frontline fighting, thieves do the locks, traps, and scouting, clerics do protection and healing spells, and wizards do the artillery spells and various support spells. In Apocalypse World, the various playbooks all have their suits of specific abilities, but for most characters all there’s a free choice from all optional abilities, and pretty much all abilities can be learned by any other characters as well. (Though you’re limited to a total of two abilities from other playbooks in addition to four abilities from yours.) And all characters can use all equipment equally well if they get their hands on it. Instead characters are defined by their role in society. There’s a character who rules over a small settlement or compound. A character who leads a cult, one who leads a gang, and one who runs some kind of bar. One character is an artists with a captivating personality, another has access to abilities that goad players to stir up trouble any time they run into important or dangerous people.

Because of this, you completely avoid the situation of the characters sitting in a bar and waiting for an opportunity to use their swords or spells to appear. Many of the characters come with NPCs who depend on them, who have expectations of them, or who just don’t like their presence. This is a game that just doesn’t do lone wanderers without connections looking for other people’s problem to fix. In Apocalypse World, you’re always a prominent somebody and problems come to you. To make this work, Apocalypse World is designed as being set in a post-apocalyptic wasteland full of dangers, where there’s always a scarcity of somethhing that makes people do stupid and dangerous things. Even if you don’t seek riches or glory, staying put in a quiet place isn’t an option. When you have no food, you have to get some. And when you have it, you have to keep hold of it. This really is not a radically new idea. But it’s a very different one from the D&D adventuring party.

My ideas for an ancient forest world have never been post-apocalyptic. But it has always been about the treacherous wilderness on the frontier, beyond which lies a vast unknown home to strange beings and phenomenons. It is in many ways and environment with a great deal of structural similarities, and I found that all the character types from Apocalypse World translate very well to a fantasy wilderness. You live in an insolated stronghold surrounded by hostile wilderness and it is up to you to take steps to keep the mundane and supernatural dangers that are lurking out there from getting in. I had actually considered something along this line some years ago, but still thinking about adventures in terms of dungeons, monster stats, magic items, and experience point I just couldn’t figure  out how to make this work.

Learning how Apocalypse World approaches campaigns, player characters, and NPCs was a very fascinating and inspiring process. And all the while, I couldn’t help but think how all of it would translate to Bronze Age warriors riding dinosaurs through a vast forest ruled by strange beings. At some point, I had this image in my mind of “Dark Sun, but in a giant forest”. And with the default assumptions of Apocalypse World, this seems like a really good starting point for a redesign of that ancient forest that always keeps calling back to me.