Fantasy in recent decades seems to have a big thing for magic systems, and I believe partly becuse of the success of Brandon Sanderson. When I see people talk about magic systems it more often than not seems to revolve around different types of spells and the method of their casting. To the point that it seems to be taken for granted as a basic premise for any kind of magic to appear in fantasy. 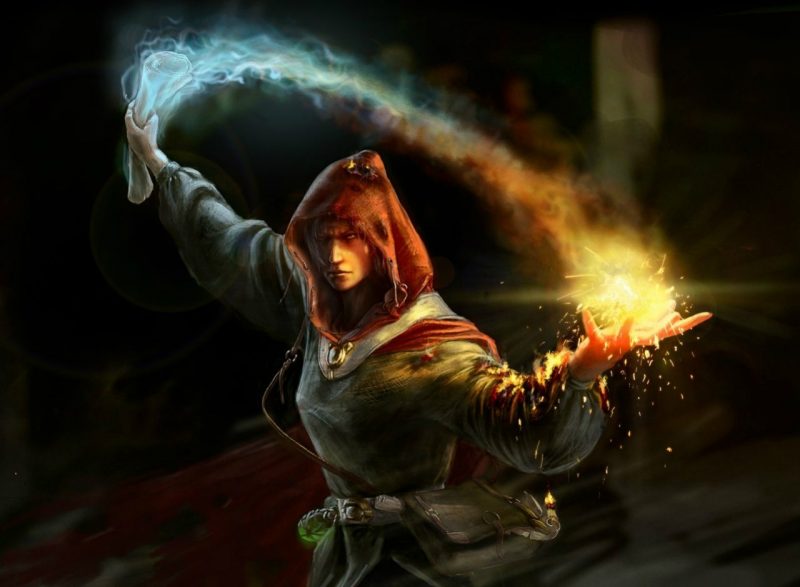 This week I was exploring the idea of converting Apocalpyse World to a Sword & Sorcery game. All in all, it’s a system that strikes me as a really good match right out of the box with the one major thing that is missing from it being a set of rules for spellcasting. But it’s not like the game is completely free of magic. One default assumption of the setting of an Apocalypse World game is the existance of a Psychic Maelstrom, which is the source of seemingly supernatural effects and phenomenons, but whose actual nature and trait are deliberately left completely unspecified to organically take shape during play. There is a single ability that allows one of the classes to use magical power in a somewhat direct way, but it is again very vague and open ended and does not really fit the image of casting a spell.

And looking at older fantasy books, this is actually very much like magic used to be portrayed in fiction. The oldest example of a straight up spell slinger I can imagine is Tim the Enchanter, who can summon up fire without flint or tinder. Gandalf, Elric, or Kane, or any of the sorcerers in Conan’s stories don’t say magic words and have stuff shoting from their outstretched hands. Instead their “magic” mostly takes the form of knowing things and being in contact to powerful entities otherwise invisible to the perception of regular people.

The spell in its modern form appears to be primarily a game mechanic. One that was carried over from RPGs to videogames and from there seeped out into the wider field of fantasy in general. While I am a big fan of fantasy games, I’ve always had reservations about the gamification of non-game fiction. Even with games I prefer mechanics to be as invisible as possible and maintain a more organic feel in the in-game fiction. (Which is why I find Apocalypse World quite appealing and always had a problem with D&D magic.)

With the Ancient Lands, I’ve always felt more like making a “game of the book” rather than a “book of the game”, even with the vast majority of my work over the last year being on game stuff with no actual book anywhere near to sight. But these days I feel once again more drawn to writing fiction, with my game development having reached a point where there’s not really much left to do other than playing it. And even with all the worldbuilding advice for writers that adresses magic systems, I find the idea of a spell-less magic to be a lot more interesting.