Certainly feels like I am done. Despite saying just a few weeks ago that I felt I barely had made any real progress over the last six years of working on the Ancient Lands, I think that I now have all the pieces togther. Not ready for a publication by any stretch, but you could say the setting has reached the beta stage, where it’s completely playable.

Some monsters still need proper names and a handful still needs their stats written down, but I got a 100 entries bestiary. The gods still need naming, but I have them all together and religion properly worked out. The four character classes are all ready to play and the magic system is complete. I got all the races and an outline for the culture, and good sounding names for almost all of them. The map is an ungly sketch but it has all the countries that I want to include. 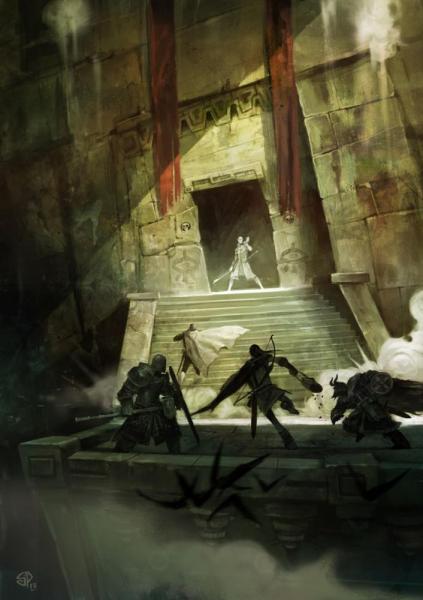 This thing can be played.

This week I was reading through the older posts I’ve written here about the Ancient Lands in more detail, and while it is true that almost all major elements of the setting where already in place in early 2011, the vast majority of them had a sometimes quite significantly different shape and appearance back then. Based on what I’ve been writing about the process, the setting really grew into the world I want it to be in the last 8 months. Many things I now consider crucial to the theme and style of the setting I wrote about only last summer. Looking back a full year before now, there’s still a lot of stuff that now seems completely out of place to me. Deserts, empires, trade networks, criminal organizations, humans! What was I thinking?!

I think a big tipping point was writing the Project Forest Moon post. This was when all the ideas and things I liked really became one coherent concept. That’s when it clicked and I realized which of my many inpirations I really want to set the overall tone for the world. Endor, Morrowind, Kalimdor, and Planescape (Beastlands and Pandemonium). I want the Ancient Lands to feel like those, and everything that doesn’t have anything to do with bringing that style to life can go. No empire, even when it’s lizardmen. No deserts, no steppes, no tundra. Certainly no criminal organizations, multinational mining consortiums, or national borders. But as I now recently realized, also no stone age hunters. In my quest for making a more solid tribal society and animisitc religions in a largely unsettled world I regularly kept forgetting that it’s still supposed to be a Bronze Age level setting. But now it finally all looks right.

There’s still a good amount of things to be done. The first priority being the creation of a sandbox for my next campaign that I’ll hopefully be starting before the summer. The setting I have created now is a set of rules, monsters, cultures, and general geographic overview. Creating adventures for it is another step entirely. The other thing I want to do is to actually get all the ideas that mostly exist in my head and on some indecipherable notes into a coherent text that can be shared and used by others. I am still not putting any hope in any kind of commercial success with this setting, but I definitely want to release it to the public. Over the many years of working on the Ancient Lands I’ve been getting a considerable number of comments and also messages from people simply wanting to tell me that they really like my ideas and would love to play in such a campaign. And that’s really all the confirmation I need that this isn’t a completely pointless undertaking. Even if nobody else ever runs an Ancient Lands campaign, it can still be a useful sourcebook for material or at the very least a source of inspiration for GMs wanting to start making their own settings.