I think the greatest thing that oldschool roleplaying brought to the attention of younger GMs like me is the whole system of wandering monsters, reaction rolls, and morale checks. When I first got into RPGs I occasionally saw mention of them, but they seemed silly and annoying for what I assumed a good adventure to be like and a good riddance in general. But after having played and run games for over 10 years, all the adventures never turned out to be anything like what I had been hoping they would. And I think it really comes down to D&D of that time having abandoned the aforementioned mechanics. Which didn’t start with 3rd edition but actually preceded even AD&D 2nd edition for a good number of years.

My first contact with RPGs was Baldur’s Gate and that set a precedent of what I expected adventures to be like and I found it confirmed by AD&D modules I’ve looked at. When you encounter a creature, one side makes a surprise attack and then the fight continues until one side has been wiped out. The characters get XP and the treasure lies where the enemy fell. Having creatures appear randomly and someimes trying to run away would be a nuisance and interrupt the plot. But videogames NPCs are still absolutely primitive compared to one controlled by a GM and I much later learned that most of the modules were not meant to be normal AD&D adventures but tournament modules for conventions where many groups would play the same dungeon simultaneously as a single session one-shot and then compare which party got the most points. Which is why The Tomb of Horrors is so awful. It’s not meant to be part of an ongoing campaign, but unfortunately fails to explain that to GMs who read it.

Wandering monsters in a dungeon have the main function of keeping the party moving and the clock ticking. They make resting in a dungeon almost impossible and that means your spells and hit points have to last you through the whole expedition. Since wandering monsters have negligible treasure and roughly 75% of XP are expected to come from collecting gold, fighting them is just a waste of resources and a risk of death with barely any reward. And as wandering monsters are encountered based on time spend in the dungeon, there’s a real incentive to be quick. Giving the majority of XP for treasure also has the effect that it is often more efficient to just steal treasure without a fight and minimize the loss of spells and hit points (and party members). Getting 75% of XP for stealing treasures without defeating the owners will get you more than getting 100% from just one creature. XP for gold seemed silly, but is actually great design.

It also makes morale checks much more interesting. An opponent who runs away may abandon its treasure. Every round you don’t have to fight saves you more hit points and spells and allows you to continue the current expedition a bit longer. Yes, they run away with their pocket change, but you still get all the XP for having defeated them.

But let’s now look at reaction rolls, which are perhaps the most intriguing element of oldschool roleplaying. A reaction roll tell you how a group of creatures or NPCs will react to encountering the PCs when their reaction is not predetermined by the adventure or obvious. I took notice of this and mentally filed it away to be used with animals encountered in dungeons or NPC parties encountered during overland travel. But what does “obvious” actually mean? A group of zombies? Yeah, obvious. A golem guarding a door? Predetermined by the adventure. But what about a group of orcs sitting around a campfire? Obvious?

Well, I always assumed it is, based on fantasy books, movies, videogames, and all the adventures published by WotC and Paizo. But this is a preconception that is not actually supported by the 1981 Moldvay Basic rules. Yes, orcs are chaotic and it says that Chaos generally means evil. But player characters can be chaotic as well and they are members of the party. Chaotic indicates breaking rules and promises when it benefits you and you can get away with it. And what benefit is there in randomly attacking groups of well armed people?

I always found it somewhat difficult to interprete the rection table. What does it mean if the result is “Hostile, possible attack” or “Uncertain, monster confused”? But with a bit of searching you can easily find a few examples from fiction. When Bilbo encounters Golum under the mountains, Golum plans to kill him and eat him. But he doesn’t have surprise and knows that frontal attack is risky so he keeps Bilbo talking in the hope of getting an opportunity where he has advantage. That fits very well with “Hostile, possible attack”. Another good example is in Return of the Jedi when Leia encounters the ewok Wicket whose reaction is just spot on “Uncertain, monster confused”. He holds up his spear but only to keep her at a safe distance, not with an intention to attack her. Because she handles the situation well she’s able to get the ewoks as allies. A bit later the others get in a similar situation but Han handles it less well ad the ewoks decide to cook them. 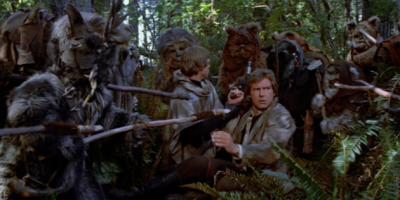 Only on a roll of 2 on a 2d6 does a reaction roll actually indicate an immediate attack and a 3 to 5 indicates hostility with a chance that the creatures might attack. This results in only a 28% chance that a fight breaks out without the players initiating it. If you start making reaction rolls for any encounter where the reaction isn’t automatically fixed, it will change the game quite a lot. Orcs and ogres are no longer monsters but people just like bndits, mercenaries, or barbarians. Their culture might be different and unappealing to many of the PCs, but if the players handle it right they can be interacted with just like people.

This affects both worldbuilding and the way that adventures play out. A dungeon in which only a third of encountered denizens are hostile and the rest could provide information, cooperate with the PCs, or even offer free help is a very different place from the common deathtrap presented in most modules in which everything including the kitchen sink tries to kill you on sight. And again, this is supported by XP being gained mostly through finding treasure. How much XP you get out of a dungeon does not depend on the number of fights. XP for gold may not be perfect, but it certainly beats XP for combat only. If you get a reward for fighting and no reward for not fighting, the message for players is clear. Kill everything. (Don’t let them run away, they take all their treasure with them which you need to buy magic items from stores.)

This encourages and supports a play style that is really about exploration and discovery of fantastic environments the PCs will find themselves in. Treasures are an incentive to poke around and find hidden rooms, but seem much less like the main purpose why you go on an adventure. The options to discover things about the environment and the greater world are very much limited when all your interactions are with statues and wall paintings. There is so much more that can be leared by interacting with other people and the knowledge you gain becomes much more useful and meaningful if it can help you with dealing with other people you’ll encounter later. Or possibly people you encountered before and who might reward you for sharing your discoveries.

Another fascinating part of the rules that had almost entirely disappeared are retainers. In 3rd edition you have to be at least 6th level and spend one of your precious few feats to get only one retainer. In Basic everyone can have around 4 at first level for free. (You have to pay wage, but that’s no limited resource.) My assumption was that you’re meant to post job offet notes at the market place and then pick one of the people who come to apply. But that’s not what the rules demand. A much more fun and interesting option is to recruit people you meet on adventures. It says retainers can be of any level or any class but not have a higher level than the PC they follow. But the Hit Dice of a monster are effectively the same as class levels in every way. Once you make it practice to befriend monsters, why not let players take them along as retainers? The GM would have to rely on making good judgement calls on what kinds of monsters might possibly be hired. A black pudding or a purple worm would be silly. But if it’s reasonably intelligent, able to integrate into society, and the player mange to get it friendly, why not?

While working on my setting and preparing for my next campaign I wanted to do something different than the average treasure hunt or assaulting the lair of a villain over and over. Instead I want to do something much more fantastic that focuses and supernatural things and discovery. I mostly failed at this with my last two campaigns and even in the last months much of my preparation once again ended up focusing on humanoid antagonists. Realizing that the 35 year old Basic rules suggest a world that is much less hostile and encouraging cooperation with dungeons denizens between the line has been a major eye opener for me. And once more makes me feel amazed that an RPG so close to what I consider perfect has been around almost from the very beginning. (There’s still negative armor class and spell preparation, but those are easily fixed and exist for the purpose of edition compatibility.)