Jirel of Joiry by C.L. Moore is widely considered to be one of the great honored ancestors of the Sword & Sorcery genre by fans. There are a total of five tales of the character of which four have been published between 1934 and 1936, making them contemporaries of Robert Howard’s Conan tales and some of Clark Ashton Smith’s Hyperborea. Moore is primarily known for her science fiction work (and she wrote the first draft for The Empire Strikes Back) and build a very considerable reputation over the course of her career. I had not read anything by her before, but the name recognition alone had me go into this with pretty high expectations.

Jirel of Joiry is the ruler of a principality somewhere in “medieval” France. She’s a ruler and a warrior, which makes her the first published female hero of Sword & Sorcery (though Robert Howard wrote some which he didn’t get published), and you have to look pretty far and wide to find any other. However, I have to say I personally found her to be a very flat and one-dimensional character. She has no backstory whatsoever other than being the ruler of Joiry and her personalty consists of the two emotional states of anger and defiance. To me that barely qualifies her as a character. 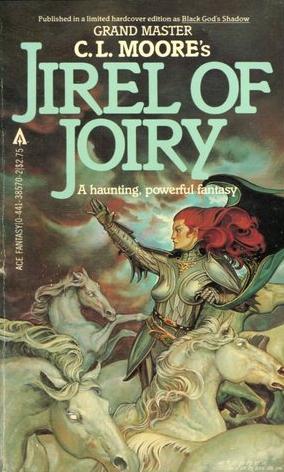 The stories themselves are a mixed bag. I quite like the first story Black God’s Kiss and the last story Hellsgarde, but was hugely disappointed by the other three. One thing that Moore does get very right is the creation of atmosphere and the imagining of strange and alien sights and landscapes. This is stuff that stands up pretty well when compared to the imagery evoked by Clark Ashton Smith, who was certainly a master at this. But this is not much consolation considering that the plots all completely suck.

Black God’s Kiss stands well above the others in this regard, as it has things happening and progressing. Jirel has been defeated by an enemy general and imprisoned in her own dungeon, after having suffered the terrible insult of being forced to kiss him. This can not stand and so she calls on the priest of her castle to help her getting her revenge by leading her to a secret passage that leads into a strange nightmare realm, where she might find some source of dark magic to slay her enemy. The journey down the strange passage and through the other world is quite well done and I greatly enjoyed reading it. The story also ends in a quite surprising way that I found to be pretty brilliant. I’ve seen comments about people considering it misogynistic, but my impression was that there are dark forces at work and not that Jirel succumbs to some “female weakness”. I very much recommend reading this one and seeing it for yourself.

The same can’t be said for the other stories. Black God’s Shadow is pretty much part two of the previous one, but reads more like Moore was recycling all the strange sights she had cut from Black God’s Kiss to keep the story from getting too long and losing its pacing. But nothing actually happens. In Jirel Meets Magic and The Dark Land, she finds herself in different strange realms of magic that have their own weird sights, but again nothing at all actually happens. These three stories consist of nothing but descriptions of strange things seen in strange lands, but without a plot it’s hard to care about any of them. Hellsgarde is better again in that it doesn’t go to yet another strange realm and that it has a plot. Jirel has to travel to an old haunted castle in a swamp to ransom her knights out of captivity but finds it to be not entirely abandoned. It’s not a great plot, but it’s a plot, and it has a surprising reveal at the end, that unfortunately fails to actually change anything that happened before.

Another big problem I have with the stories beside the lack of character and plot, is that Moore did a pretty poor job at making things feel threatening. The stories are mostly nothing but descriptions of things, but she still managed to completely fail at following “show, don’t tell”. Pages over pages of descriptions of how things look like and how Jirel feels about seeing them, but the things she describes don’t appear to be threatening at all. The moonlight looks poisonous, the shadows look evil, and the river looks terrifying. And we have nothing to go with than taking her word for it. There’s no mention of how the moon, the shadows, or the river look different from ordinary examples and so there’s no reason why we should feel anything similar to what she tells us Jirel is feeling. In Hellsgarde we even get a man of ordinary stature with “the face of a hunchback” and “the voice of a cripple”. At the third mention of the hunchback with the straight back, I couldn’t help myself thinking: “You keep using this word. I don’t think it means what you think it means.”

So in my final assesment I have to say: Nay! While I think Black God’s Kiss is a good story and entertaining read, Jirel of Joiry is not a good or interesting collection at all. In fact, I think it’s really pretty bad. Moore is one of the few women who wrote Sword & Sorcery and Jirel one of the very few female protagonists of the genre, and I suspect this might be the reason of the character’s limited fame. We want more female writers and more female protagonists, and being able to find one back in the 30s we latch onto it. However, more recently we got The Copper Promise by Jen Williams which also has a female protagonist. I am currently reading it and while I am not much of a fan yet, Williams easily pushes Moore down to second place for women in Sword & Sorcery. Let’s just hope we’re going to see more competition in the coming years.